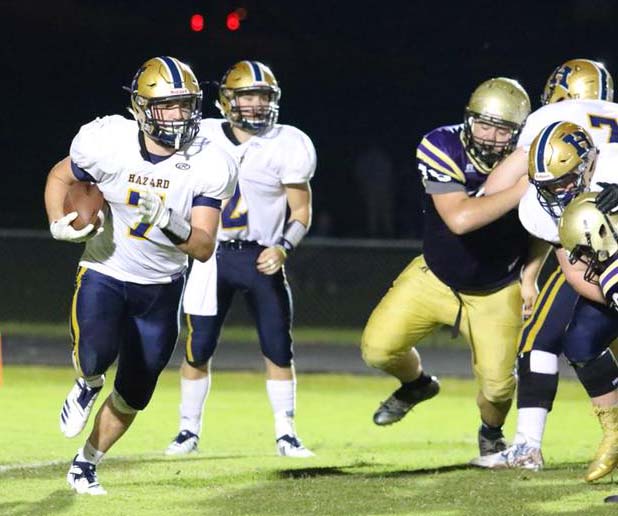 The Bulldogs will enjoy a Friday off this week as they prepare to get into the heart of their schedule. The Bulldogs bye week will come after a heart breaking loss in week 3 that saw them fall to the Somerset Briar Jumpers 24-10 in a game most of the team felt confident about winning going into last Friday night. The loss comes after impressive wins against 5A District 8 defending regional champion the Harlan County Black Bears and the 5A Letcher Central Cougars. Besides some early breakdowns on defense against the Black Bears, Hazard had been very stingy on defense and dominant on offense. They also have some of the best young players that have been through the program in a few years. Several of the freshman and sophomores are competing for starting varsity positions on an experienced returning team.
Defensively the Bulldogs had answered some questions about holes that needed to be filled on defense due to graduation. The defensive line that lost 3 starters, and only returning Jacob Brashear who had any substantial playing time, have filled those positions nicely with junior Parker Holbrook, senior Ben Adams, senior Draven Goins, and juniors Nate Smith, Matt Couch, and Dalton Strong. A returning linebacker core of Skylar Pelfrey, Mason Collins, and Reece Fletcher only needed to fill 1 outside linebacker position. Battling for that spot along with senior Bryson Sayers are freshman Zane Deaton and Ryan Dean, all seeing playing time this early regular season. Freshman Hootie Thomas has also gained some valuable varsity time at middle linebacker as well. The Hazard secondary returned a ton of experience with two, 3 year starters in Isaiah Stupart and Andy Baker. Both have started since they were Freshman. They are complimented by returning junior starter Trajon Campbell. Another battle has broken out for that last secondary spot between senior Kyle Johnson, sophomore Ryan Davidson, freshman Tyson Turner, sophomore Campbell Davis, and junior Kaleb Eversole, who have all seen time this year as well. By the start of district play Hazard should have developed not only some experience, but depth as well by playing so many different players early this season.
The offense has been lead by senior standouts Bailey Blair and Skyler Pelfrey who are both 3 year starters. Blair’s consistent and steady play hasn’t been flashy (32/54, 474yds, 4Tds, 2 int) but is backed up by his tough gritty play and ability to keep plays alive with his feet, gaining 117 yards rushing this season. Coach Dixon and staff knew they were going to have to develop a running game in order to make a run at a regional title and keep defenses honest. Returning running back Reece Fletcher filled in nicely last season after an injury ended Mr. Football hopeful Corey Smith’s season, rushing for nearly 600 yards in 2017. Pelfrey has exploded onto the scene with powerful runs and hard yards after contact that should culminate into a relentless run attack along with Fletcher. The Bulldogs have already seen success using those two along with Mason Collins in a power run game that gives the Bulldogs one of the biggest backfields in the state regardless of class. Opening those rush lanes are seniors Goins and Caudill along with juniors Strong and Couch and freshman Beverly and Caudill. In addition to the run game, Blair has keep teams guessing with a stable of returning, as well as, new talented receivers to throw to. Returning receivers include Baker, Stupart, Fletcher, and Collins along with new comers Kyle Johnson, Tyson Turner, and Andrew Ford.
As we look going forward in the regular season, Hazard seems to have all the pieces to make a run at a region that will likely include a post season match up against perennial rival Pikeville. Those two will meet up on September 28th in Pikeville to kick off district play. The one thing the Bulldogs must work on by then is special teams. While sometimes an overlooked part of the game, the lack of kick coverage is what was the deciding factor against the Briar Jumpers in last Friday’s loss. Somerset scored on a kickoff return and a punt return. Undoubtedly, Coach Dixon will have this fixed by the Prestonsburg game. Although there have been some negatives on special teams, there have also been some very bright spots as well. The Dogs have used two 1st year kickers who been perfect with extra point tries ( Jonah Helm 6/6 and Nick Combs 5/5 ). Helm also has a field goal on the season.
After this bye week of conditioning, tweeting break downs, and letting some bumps and bruises heal, Hazard will be in the heart of their season. Full time starters will emerge as competition for positions improve practices. The Bulldogs should have some considerable depth, relatively speaking for 1A, and some younger players gaining valuable experience moving into the regular season. The next game will be Hazard’s home opener against Prestonsburg. The Blackcats will enter the game being led by new head coach Brandon Brewer. Game time is set for 7:30 at Hazard’s Daniel Field.
Hazard Stats for the season
Passing
Blair 474 yards, 4 TDs, 2 INTs
Rushing yards
Pelfrey 367
Blair 117
Fletcher 87
Campbell 77
Receiving yards
Baker 157
Johnson 100
Fletcher 64
Collins 59
Stupart 30
Pelfrey 58
Ford 22
Turner 17
Scoring (points)
Pelfrey 38
Blair 12
Johnson 12
Helm 9
Stupart 6
Fletcher 6
Collins 6
Combs 5
Ford 2
Fumble recovery
Turner 1
Campbell 1
Davidson 1
Tackles
Fletcher 29
Baker 27
Pelfrey 21
Sayers 15
Campbell 13
Adams 11
Collins 10
Holbrook 10
Brashear 8
Stupart 8
Davidson 7
Eversole 6
Deaton 5
Thomas 5
Turner 5
Couch 4
Davis 4
Cornett 3
Johnson 3
Beverly 3
Olinger 3
Caudill 2
Combs 2
Dean 2
Smith 2
Strong 2
Goins 2