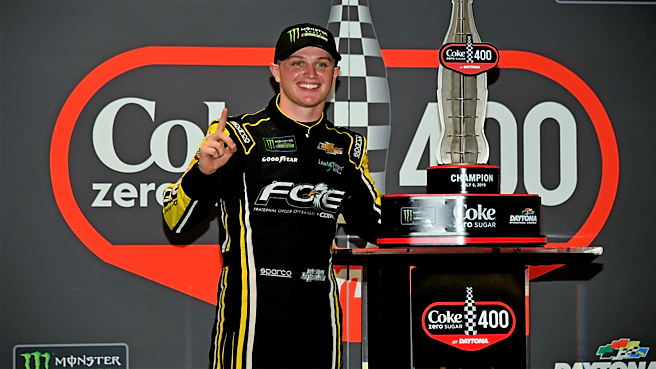 Inclement Weather blanketed the Volusia County vicinity which interrupted the scheduled Saturday night race at The World Center of Racing.  The stated race was postponed till Sunday July 7th and was brought to green by Pole Winner, Joey Logano – Driver of the No.22 Penske Ford.

Season Veterans Kevin Harvick – Pilot of the No. 4 Stuart-Haas Ford and Brad Keselowski – Driver of the No. 2 Penske Ford battled for the lead early in Stage 1. The Fords kept the field in check until a Paul Menard’s No. 21 Ford’smechanical issue bunched the field.  As tires wore, Drivers drafted to the top lane of the 2.5 mile speedway for advancement.

On Lap 37, Logano leads the Fords to pit lane for a full cycle pit stop.  A lap later, the rest of the field headed to pit lane, most opted not to take fresh tires for track positioning.  This strategy allowed the Chevys to take over the point but the dominating Fords were approaching quickly in their rear view mirror.  Harvick and Logano navigated the Ford train past the front running Chevys on the outside and reclaimed the lead.

Stage 1 final lap, With the assistance of Rickey Stenhouse Jr.’s  No. 17 Ford’s tap to Harvick’s bumper,  Logano took advantage of the alteration and cruised to a Stage 1 win.

As Stage 2 proceeds, Austin Dillion – Driver of the No. 3 Chevy and teammate Chase Elliott-No. 9 Chevy, work together to challenge the Ford family for front bragging rights.

Five Chevys would line up on Lap 66 to pace the field on the bottom section of the track.

With only 5 laps remaining in Stage 2 , Ricky Stenhouse Jr. and Clint Bowyer– Driver of the 14 Stuart –Haas Ford’s make a run on Dillion and pass the leader.  Dillon would fight back with the aid of his Hendrick teammate Alex Bowman – Driver of theNo. 88 Chevy to reclaim the lead and Stage 2 win.

After the field returns to pit lane after Stage 2 completion, Joey Logano gambles with a two tire service and will be the first off pit lane. A four tire change for Dillion will sink his position to fourth place.

Dillion worked his Chevy back to the front and would control the momentum until The Big One.

A confrontation with Dillion and Bowyer for the lead,  would bring out a multicar collision, which took out half the field on Lap 118.

Justin Haley – Driver of the No. 77 Spire Motorsports Chevrolet chose to stay out,  as the small field pitted.

Haley was set,  to lead the remaining drivers back to green, but the weather would not cooperate.  As storms and lightning 7 miles away approach, NASCAR calls the race, validating Justin Haley the win.

Bluegrass Sports Nation will have full coverage of the races at Kentucky Speedway next weekend with Brendon D. Miller, Anthony Holbrook, and Larry Robinson bringing you all the action!