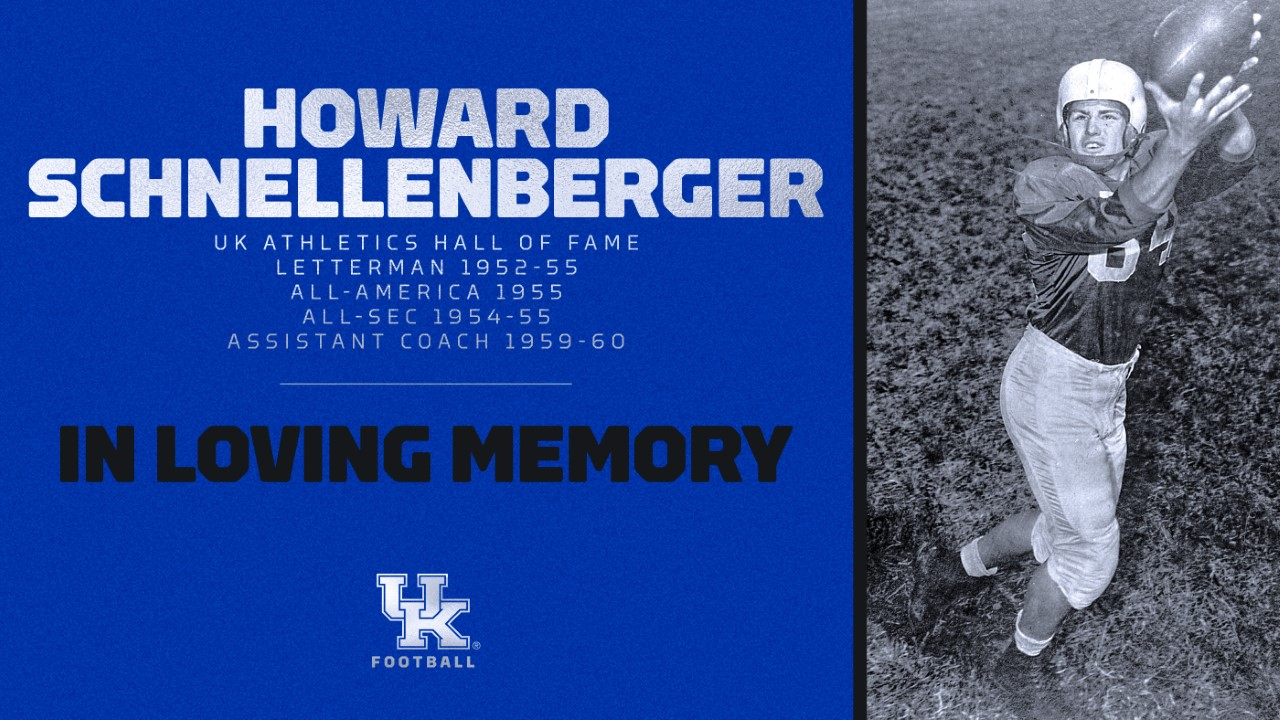 Howard Schnellenberger, a football All-American and member of the University of Kentucky Athletics Hall of Fame, who had an outstanding career as a collegiate and professional coach, died Saturday at the age of 87.

“We are deeply saddened to learn of the passing of Howard Schnellenberger,” said Mitch Barnhart, UK Director of Athletics. “The term ‘legend’ is used a lot in our society, but it certainly fits Coach Schnellenberger. From his playing days as an All-American at Kentucky, to his coaching success in the NFL, and on to his national championship and many other accomplishments as a collegiate coach, Howard leaves a legacy of greatness. Our heartfelt condolences are with Beverlee and his family and friends.”

A native of Saint Meinrad, Indiana, Schnellenberger graduated from Flaget High School in Louisville, Ky., before entering the University of Kentucky in the fall of 1952. He played four years for the Wildcats as an end, two seasons each for Coach Paul “Bear” Bryant and Coach Blanton Collier.

He also led the team in receiving as a junior with 19 catches for 254 yards and three TDs, and was named third-team All-SEC. His most memorable play as a Wildcat came that season, as his 22-yard TD catch from Bob Hardy gave UK a 14-13 season-ending win at Tennessee.

For his career, Schnellenberger totaled 44 receptions for 618 yards, an average of 14 yards per catch.  He had 11 touchdowns, a ratio of one TD for every four receptions.  On defense, he recorded three pass interceptions.  He was part of four consecutive winning teams and a total record of 25-12-4 as a Wildcat. Following his senior season, he played in the Blue-Grey All-Star Game and the Senior Bowl.

Schnellenberger began his coaching career at UK under Collier in 1959 and 1960, guiding the Wildcat wide receivers and tight ends. He rejoined Bryant as offensive coordinator at the University of Alabama from 1961-65, helping the Crimson Tide win national championships in ’61, ’64 and ’65.

Schnellenberger moved to the National Football League in 1966, beginning with four years with the Los Angeles Rams.  He was offensive coordinator for the Miami Dolphins from 1970-72, including the 17-0 Super Bowl champion campaign of ’72, the last undefeated team in NFL history. He was head coach of the Baltimore Colts in 1973-74 and returned to the Dolphins as an assistant from 1975-78.

Schnellenberger returned to the collegiate ranks at the University of Miami (Fla.) in 1979, eventually winning the 1983 national championship with an 11-1 record, defeating Nebraska in the Orange Bowl.

After a brief foray in the United States Football League, Schnellenberger returned to Kentucky as head coach of the University of Louisville in 1985.  He coached the Cardinals for 10 seasons, highlighted by a 10-1-1 record and Fiesta Bowl win over Alabama in the 1990 season. He was instrumental in pushing for the renewal of the Kentucky-Louisville football rivalry, which resumed in 1994.  He left Louisville to coach the 1995 season at the University of Oklahoma.

Schnellenberger made his final coaching stop at Florida Atlantic University from 2001-11.  A Division I-AA independent, he guided the Owls to the semifinals of the 2003 NCAA playoffs.  FAU moved into Division I-A in 2005.

All totaled, Schnellenberger’s overall collegiate record was 158-151-3.  He went 6-0 in bowl games, with two wins each at Miami, Louisville and FAU.

Schnellenberger earned numerous Coach of the Year honors during his career and is a member of several halls of fame, including the UK Athletics Hall of Fame.

Schnellenberger is survived by his wife, Beverlee; son Timothy and wife Anyssa; son Stuart and wife Suzie; grandson Joey and wife Kristie; grandson Marcus and wife Rachel; granddaughter Teather and husband David; and great-grandchildren Tyler, Lacie, Harper Ann and Angel. He is joined in death by his son Stephen, who passed away March 9, 2008 at the age of 48, and great-grandson, Angel.