Howard’s Career Day Leads No. 13 Kentucky Past No. 22 Tennessee 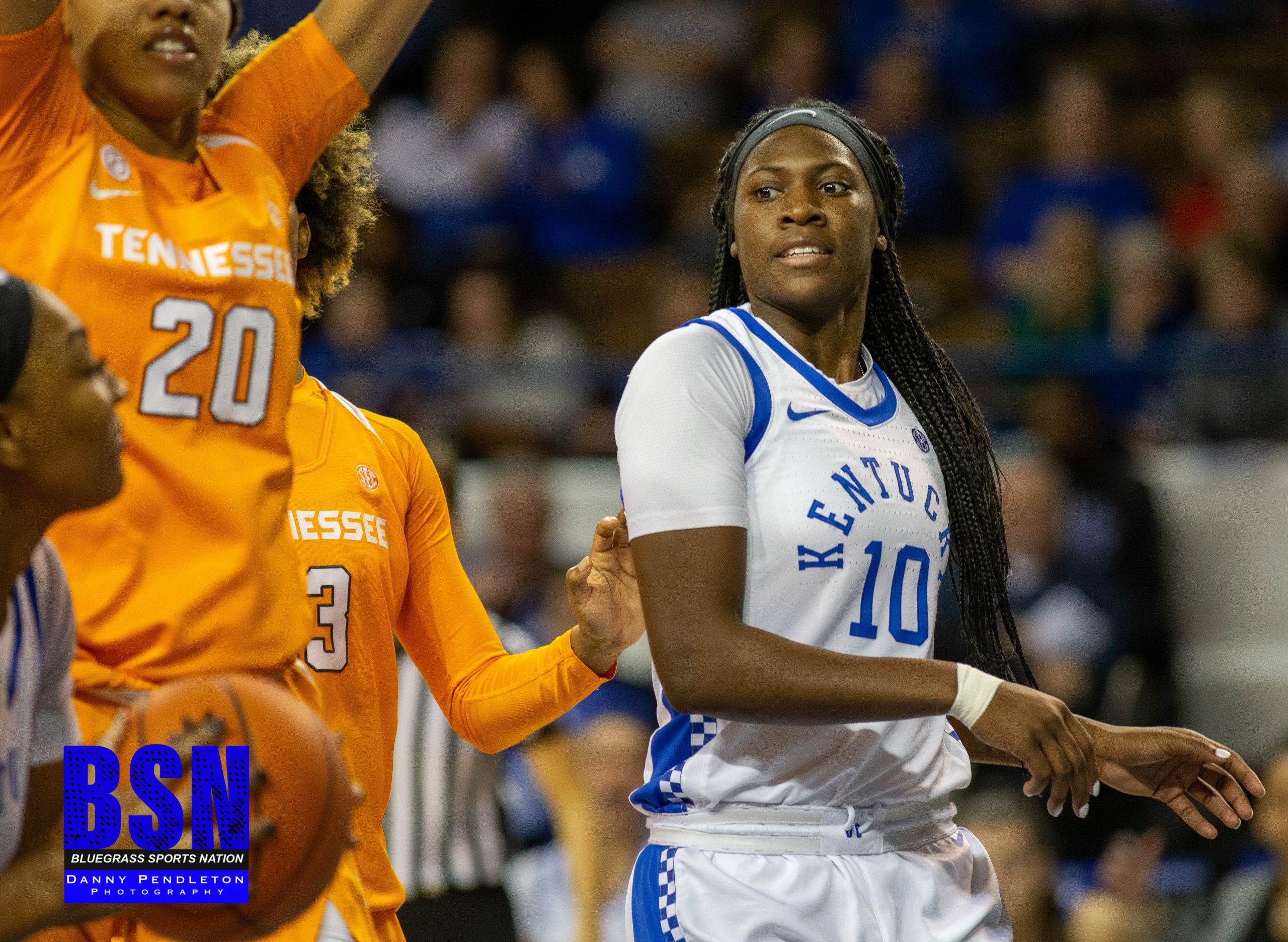 Howard tied the UK school record with seven made three-pointers in a game, a record she also tied last season against Southern. On Sunday, Howard made 12 of 27 shots overall, including seven of 13 from behind the arc and six of nine from the line for her 37 points. She added nine rebounds and five assists in the game.

Sabrina Haines was the only other Kentucky player in double figures, scoring 11 in the game, including three baskets from behind the arc.

Kentucky (12-2, 1-1 SEC) forced 21 Tennessee turnovers and converted those into 28 points. The Cats had just 13 turnovers, leading to 13 Lady Vols’ points. Kentucky took advantage of hot shooting from behind the arc, making 13 of 27 (48.1 percent) of its long-range baskets, while Tennessee made just three of 11.

Tennessee jumped out to a 4-0 lead early before Kentucky got on the board via a three-pointer from KeKe McKinney to cut the lead to 4-3. After a Tennessee basket, Howard tied the game at 6-6 on a three of her own. And on Kentucky’s next possession, Howard drilled another three to give UK its first lead, 9-6.

Tennessee would score the next four points to lead 10-9 before Ogechi Anyagaligbo and Blair Green made consecutive layups to give the Cats a 13-10 lead with 4:46 left in the period. And when Chasity Patterson hit a corner three on Kentucky’s next possession, the Cats had a 16-10 advantage. Howard would hit another three at the buzzer, giving Kentucky a 21-14 lead after on quarter.

Early in the second period, Kentucky’s defense was strong, forcing four Lady Vols’ turnovers in the first three minutes. Kentucky was only able to make two of its first eight shots in the period, but both were threes, one by McKinney and one by Haines, the latter giving UK a 27-14 lead and forcing a Tennessee timeout.

The timeout seemed to help the Lady Vols, who scored the next eight points to cut UK’s lead to 27-22, forcing a Kentucky timeout. But the Cats could not stop the Lady Vols’ run, which would eventually build to 14-2, cutting UK’s lead to 29-28 with 3:11 left in the half. After a basket by Howard, Tennessee would tie the game, 31 apiece, on a three by Rae Burrell with 1:54 left in the half. And when Jordan Horston hit a pair of free throws with 1:35 remaining in the half, the Lady Vols grabbed a 33-31 advantage.

Jaida Roper would tie the game at 33-33 on a runner with 31 seconds left in the half, but Tennessee’s Jazmine Massengill hit a jumper just before the buzzer, giving Tennessee a 35-33 lead at the break. Kentucky struggled from the field in the second quarter, making just four of its 21 shots (19.0 percent), buf offensive rebounding and turnovers allowed the Cats to stay close. Tennessee’s Rennia Davis led all scorers with 15 in the first half, while Howard had 11.

In the third quarter, Kentucky came out hot, hitting four of its first six shots and assembling an 11-0 run to take a 44-35 lead with 6:33 left in the quarter. Howard had six points during the run, which also saw Kentucky force three more Tennessee turnovers.

After a Tennessee basket, Howard hit a three with the shot clock expiring to give Kentucky a 47-37 lead with 4:32 to play in the third. Howard would strike again just over a minute later, hitting her sixth three of the game to give the Cats a 50-37 lead. But the Lady Vols outscored the Cats 9-1 to close the period, which ended with Kentucky leading 51-46.

Howard started the fourth period with a steal, which led to a basket and one, giving the Cats a 54-46 lead. Kentucky would build its lead to 10 points, 63-53, on a three by Haines with 6:15 left in the game. Kentucky would hit eight of its first 10 shots in the period, including a pair of baskets from Anyagaligbo and Amanda Paschal, but Tennessee would hang in the game by making six of its nine shots from the floor and six of nine from the line.

The Cats would lead by 12, 72-60 on Howard’s seventh three of the game with 3:42 to play. But as they did all day, the Lady Vols fought back, scoring the next eight points to cut Kentucky’s lead to 72-68 with 2:22 left in the game. After Howard drove to the basket and scored, Tennessee answered with a layup by Massengill to cut the lead to 74-70.

After a pair of free throws from Haines, Tennessee got a layup from Burrell to again cut the lead to four, 76-72 with 1:28 to play. Roper missed a running layup for Kentucky on the Cats’ next possession, but Tennessee’s Horston missed a jumper on the Lady Vols’ next possession and Howard grabbed the rebound and was fouled. The sophomore nailed both free throws to give UK a 78-72 advantage with just 42 seconds to play.

Kentucky returns to action on Thursday, facing Alabama in Tuscaloosa. Tipoff is set for 8 p.m. ET and the game can be seen on SEC Network Plus.