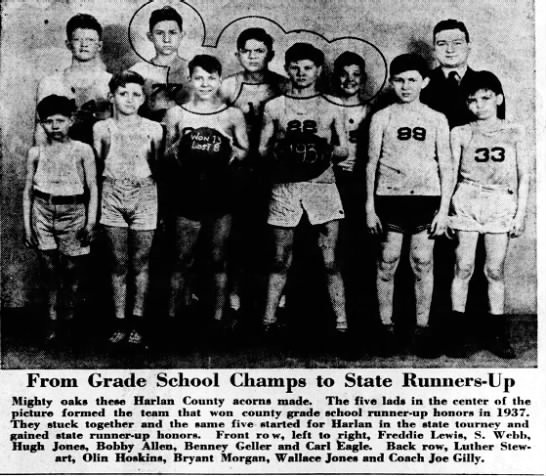 All of us in Kentucky know the name “Wah-Wah” Jones, but his older brother Hugh was also an extraordinary athlete.

Several years ago we (Mountain Sports Hall of Fame) posted on Wallace “Wah-Wah” Jones, one of the greatest multi-sports athletes this state has produced. Wah was a four time All SEC performer in basketball at UK. He also was a three time All America in that same sport. In football, he was a 1st Team All SEC selection in 1946 and a 3rd Team selection in 1948 as an end. He was drafted by the Chicago Bears. He was an Olympic basketball player in 1948 and played professional basketball for three seasons. One news account said he was a high jumper on UK’s track team, though I could not confirm that. He is the only man to have his football, as well as his basketball jerseys retired at UK. On the baseball diamond he was UK’s best pitcher and played first base. He was offered a contract to play for the Boston Braves Wah-wah died in July, 214.

The Jones brothers and three friends played grade school, “B” team ball and high school basketball together. Five that were playing together for many years! All five played together as a team thru the State runner-up season for Harlan in 1942. (see Feature Photo). You will also see some who would later be All State players on that same grade school team.

The year 1942 found Harlan winning the tough 13th Region and then defeating runner-up Corbin by 17 points. The Green Dragons went all the way to the State Championship game before falling to Lafayette, 44-32. In that game Hugh Jones scored one point while little brother Wah-Wah scored 16. Other starters on that great 1942 team had started on the Harlan grade school championship team of 1937- the two Jones brothers, Bryant Morgan, Olin Hoskins and Bobby Allen. Three of that five would be back in 1943, losing only Hoskins and Morgan to graduation.

In 1943 Harlan again won the 13th Region Tournament, defeating Clay County 60-39. That was a war year and measures were taken to cut back expenditures so instead of 64 Districts that year there were twice as many-128, with most teams playing closer to their hometown plus a Sectional Tournament followed the Regionals. Those sectionals narrowed teams to eight finalists to play in the State Tournament.

Harlan defeated Wayne County by 33 points before they met up with Hindman in one of the Sectionals and fell to the eventual State champ Yellowjackets 30-23. That would be Hugh Jones last game as a Harlan Green Dragon. He would go on to play for the Tennessee Volunteers after setting the all time scoring record at Harlan. In that last game Hugh scored only one point while little brother Wah-wah scored 16. Wah-Wah and Bob Allen were both named to the All Tournament Team.

In the 1944 season the Sectionals were dropped but the 128 District Tournaments remained. Again Harlan took the 13th Regional championship. That year, after knocking at the door so many times, it all came together for the Green Dragons. All those hours spent together in grade school, on the JV team and thru high school was paying dividends as Harlan defeated Dayton (John Wooden’s old team in previous years) 40-28 to take home the much anticipated championship trophy. Wah-Wah was named as the MVP.

That year of 1944 also provided us with an All State team, first since the 1939 season. This year’s team was much as it is today with three All-State teams and 16 Regions of All State Honorable Mention selections. Wah-Wah Jones (1st Team), Carl Eagle (his older brother Garland had been their best player and guided them to the State Tournament in 1938) and Earl Bradford (both 2nd Team) were selected to the All State teams. One of Wah Wah’s teammates was Humsey Yessin who went on to be a manager at UK. Yessin’s older brother Rudy was playing for UK in 1944.

In 1945 Harlan once again won that 13th Region championship with an eight point victory over Corbin. They then defeated Covington Holmes by 10 and Cumberland (Elkhorn City-remember Zeb Blankenship?) before falling to Central City in the semi-finals by four points. Harlan once again placed Wallace “Wah-Wah” Jones on the All State 1st Team though his buddies from the previous glory days were no longer there. On the All State Honorable Mention list though were teammates Billy Rice and Jack Thompson. Wah-Wah was once again named to the Sweet 16 All Tournament Team as was teammate Billy Rice. No listing as to the tournament’s MVP that season. Wah appeared in three Sweet 16’s and made the All Tournament Team all three seasons.

Checking for age differences in Wah-Wah and Hugh Jones I checked the 1930 census records where it was found Wah-Wah was a year and a half younger than older brother Hugh Jr. That census also gave some insight as to how their dad, Hugh Sr. provided for the family as he managed a restaurant. In addition to mother Faye, father Hugh Sr., Wallace and Hugh Jr. there was a sister (Josephine) and six boarders living in the house. Among the boarders were a barber, a registered nurse, an automotive salesman and a servant.

In the 1940 census it shows their mom as head of the household and divorced. An older son named Dukie was living there who was not listed in the 1930 household. He is six years older than Hugh. In a check of Draft Registration it was found that Hugh Jr. signed up for the draft on February 5, 1943, one day after turning 18. Quite possibly that was his junior year in school.

In August, 1944 it was reported that Hugh Jones Sr. had been shot and killed in Middlesboro. He was listed as a liquor dealer and former restaurant owner in Harlan.

One Courier-Journal note in February, 1944 said Wah-Wah, a junior at Harlan High, broke Hugh’s scoring record by 59 points at the school. Hugh Jr. had scored 618 points in his last season at Harlan. Wah had been destroying big brother Hugh Jr.’s records. Another such record big brother had owned was for most points in a 13th Region Tournament game (26) in 1942. In 1943, Wah scored 27 in a 13th Regional game.

Hugh Jones spent three years in the Navy where he had played basketball for the Norfolk Naval Station. He and his old teammate at Harlan, Bobby Allen, both signed in 1946 to play at the University of Tennessee. Remember Allen had been a grade school teammate of Hugh and Wah-Wah. Newspaper accounts show Hugh started some games for Tennessee as a freshman. He was moved from forward to the guard position while there. He played regularly four season at UT, as a part time starter as a freshman forward and then a starter for three seasons at guard.

In 1949 the Jones boys made a big splash as Wallace was named to the first team All SEC in basketball while older brother Hugh was named to the 2nd Team All SEC. Hugh’s last regular season game for UT came against Ole Miss in late February, 1950. He closed it out with a game high 23 points.

A note: The University of Tennessee had a rule on football and basketball athletes in the late 1940’s that any athlete married would not be on scholarship. UK had no such rule as Wah-Wah was married in August of 1947 while a sophomore at UK. It is widely known that Rupp, especially in the 1950’s hated the idea of marriage by his players as well as multi sports players, though he made exceptions. He did not disqualify the married ones nor the multi-sports players from scholarships but disliked the idea. Wah-Wah Jones would be an exception in both categories.

Hugh Jones was found dead of a self inflicted gun shot wound in January, 1966. He had been staying with his brother’s family who had been to a UK-Auburn game.