I Am Rick Pitino—By John Huang 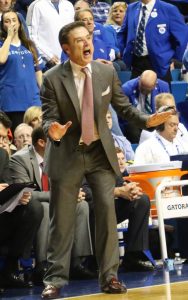 Many of you have recently asked me my opinion about Rick Pitino and his role in the U of L scandal. Up until now, I’ve purposely refrained from commenting until more of the facts came in. With the ongoing federal investigations, threatened lawsuits, and invariable delays on the docket, I may be senile before any final conclusions are drawn. So I figured I might as well go ahead and throw in my two cents now before I retire to the rocker.

I’m a Kentucky fan at heart, so it shouldn’t surprise you that my sentiments about Pitino have fluctuated from heroic to hated, depending on where he was coaching at the time. In my lead up column to the regular-season UK/UL basketball game last December, I described how those sentiments converged:

“When Rick Pitino became Louisville’s coach back in 2001, the floodgates opened, replacing my enduring admiration with outright contempt. I’m a “loyalty” kind of guy and what Rick did was unforgivable. I appreciate what he accomplished at UK but I’ll never understand anyone turning Benedict Arnold. You don’t sleep with the enemy, stab your former employer in the back, or marry your ex-wife’s best friend. Once a Wildcat, always a Wildcat. I think that’s the problem with Rick—he was never really a Wildcat. Even when Little Ricky was leading Kentucky to the ’96 national championship, I always felt he was just a displaced big city dude thinking he was doing us hayseeds a giant favor. Maybe that says more about my own personal insecurities regarding my Kentucky roots than anything else, so who am I to judge?”

Now after his marital infidelity, strippers in the dorm, and the ongoing FBI probe, everyone’s judging Rick. We’ve been inundated with columns, commentaries, and podcasts castigating his lack of moral integrity. Social media mavens are having field days with quips, GIFs, and wisecracks satirizing his embarrassing indiscretions. Through it all, Rick simply can’t keep his own mouth shut, continuing to draw more attention to himself at a time where humility, contrition, and discretion would serve him much better.

I’m not condoning any of what Pitino has been accused of doing. Lying, cheating, infidelity, greed, and pride are never the keys to success. The University of Louisville was completely correct in letting him go. I’m surprised they didn’t fire him sooner. But that doesn’t mean we need to keep kicking a man when he’s down, dragging his name through the mud, or making hurtful jokes for the sake of additional clicks. Call me cynical, but I think what happened at U of L is happening to some degree at every single program in America. That doesn’t make it right—just a bit less surprising when the perpetrators are caught. The UK/UL rivalry just won’t be the same without Pitino. Both fans and media alike will soon suffer from his obvious absence.

Retired Army General Colin Powell once said, “Power corrupts, but absolute power is…pretty darn neat.” That’s what happened to Pitino and the rest of the Louisville heads of state. They became intoxicated with power and operated as if they were above the law. They succumbed to the soothing serenade of their sycophants and honestly believed that they were pooping ice cream. Did Rick know what was going on under his watch? Probably so—but even if he didn’t, violations of that magnitude can’t be tolerated. Whether intentionally dismissive or incompetently ignorant, Pitino didn’t want to upset the gravy train.

How many of us, if we were truly honest with ourselves, would have acted differently from Rick had we been placed in similar circumstances? Who amongst us, when presented with a chance for fame, fortune, and the lure of success beyond our wildest imaginations, wouldn’t have found a way to justify our motives and rationalize our purposes? Which of you, when faced with important lifestyle choices, haven’t made dumb decisions you would later regret? I’d love to think that I’m above all that, but who’s to say? Realistically speaking, we’re all just one small temptation away from crashing and burning. The only thing saving many of us is our lack of opportunity.

I guess what I’m trying to say is that when it comes to character flaws, human frailties, and personality glitches, I’m as gullible as the next guy. I’m no better than Rick, so I derive no joy in his fall from grace. When it comes right down to it, I am Rick Pitino. I may not have his coaching acumen, his Armani suits, or his social standing from a fabulous career, but given the right circumstances, I’d probably muck it up just like he did. For those reasons, I’m not judging Rick Pitino. I certainly won’t throw stones at him in his hour of trouble. And neither should you.