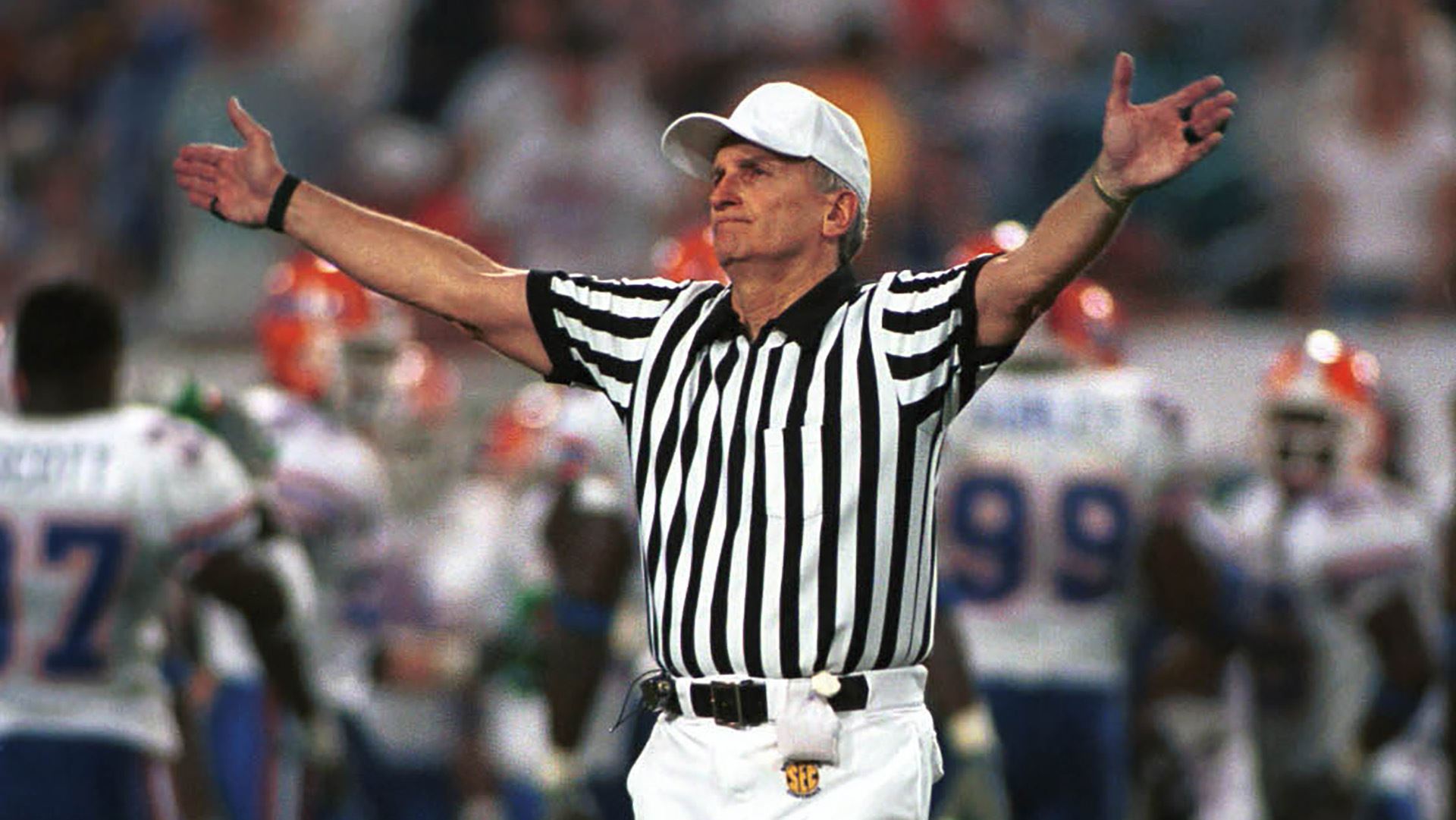 IRVING, Texas (Aug. 22, 2019) – As the season draws near, it is time for the National Football Foundation (NFF) & College Hall of Fame to highlight the key rule changes that will take effect during the 2019 college football season.

Since 2011, the NFF has partnered with Rogers Redding, the national coordinator of College Football Officiating (CFO), to help generate awareness for the rule changes in college football through a series of regular columns distributed by the NFF. The CFO functions as the national professional organization for all football officials who work games at the collegiate level, and the organization held its annual winter meeting of conference coordinators for football officials in late January for the seventh consecutive year at the NFF headquarters in Irving, Texas.

Having officiated football for more than three decades, Redding started his career working high school football in Texas. He later officiated in the Southwest Conference from 1988-93, served as a referee in the Southeastern Conference for nearly a decade and worked three national championship games. He received his bachelor’s degree from Georgia Tech and later obtained a master’s and Ph.D. in physical chemistry from Vanderbilt University. Redding was honored with the NFF’s Outstanding Football Official Award in 2010.

The NCAA football rules committee met in Indianapolis in late February and voted to recommend a number of changes for the 2019 season. The final changes were approved by the Playing Rules Oversight Panel on April 22. Under the NCAA’s two-year rules process, 2019 is an “off year” for any changes other than those that directly impact the safety of the players. Player-safety rules are always on the table, and this year there are several changes in that category. Here are the 2019 rule changes as summarized by Rogers Redding:

The targeting foul has been one of the key rules in college football for a number of years. It carries the most severe penalty in the game: player disqualification. The rule calls for a player committing a targeting foul that is sustained by instant replay to be ejected from the game and suspended for the next half of play. This means that a player disqualified in the second half must also sit out the first half of his team’s next game.

This year, the rules committee further strengthened the penalty, addressing the issue of repeat offenders. There is now a progressive penalty for targeting. Under the new rule, a player who is ejected for a third or moretargeting foul anytime during the season also will be ineligible for the entire next game. For example, suppose a player is disqualified for targeting in two games any time during the season. If he then is ejected for a third or more targeting foul anytime during the rest of the season, he will be suspended also for the entire next game.

It does not matter when this additional foul happens: whether it is in the first quarter or the fourth quarter, he will be ineligible for the whole next game. Also, it does not matter when the next game is played. It might be during the bowl season, a national championship game or possibly the first game of the next season. It is the player’s next scheduled game—whenever that is.

The role of instant replay in administering the targeting foul is also being changed. Every targeting foul goes for instant replay review, as in the past. However, starting in 2019 the replay official will look at all aspects of the play and make one of two rulings: either the call on the field is confirmed or it is overturned. A ruling of “stands” will no longer be possible for a targeting review.

For a number of years, the three-man wedge has been illegal on kickoffs. This is when three players on the receiving team align shoulder-to-shoulder within two yards of each other to block for the ball carrier. Beginning in 2019, this rule is even more restrictive: the two-man wedge will be illegal and will carry a 15-yard penalty. As in the past, the wedge is not illegal during an onside kick or when the play results in a touchback. The only change is that the two-man wedge is outlawed.

The words attacking and forcible will be key for the officials on the field in calling this foul. If the contact is to the head or neck area, it is still a targeting foul. However, it will now be a personal foul even if by rule it is not a targeting foul—that is, even if the block is not to the head or neck area. The blindside block foul will carry a 15-yard penalty.

This past season featured a game that went for seven extra periods. Although the vast majority of overtime games are decided much sooner—say, in two or three extra periods—there is the occasional game that goes longer. The rules committee feels that players may become extremely fatigued in such long games, thus making them much more susceptible to injury.

Beginning in 2019, starting with the fifth overtime, each team will have only one play: a two-point conversion attempt from the three-yard line. For a number of years, beginning with the third overtime a team that scores a touchdown must attempt a two-point conversion. This will still be true for the third and fourth overtimes, but when the fifth overtime begins, the new one-play-per-team rule will take effect.