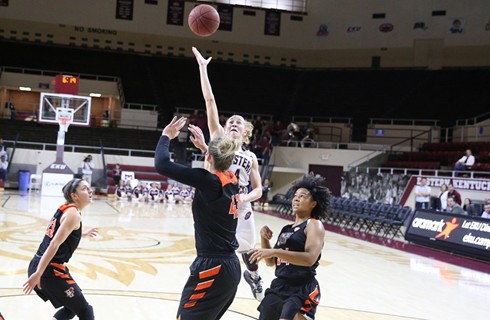 Senior guard Alexis Cooper scored 16 points while senior forward Jalen O’Bannon registered 17 points in the victory.  EKU (2-2) made 50 percent of its three-pointers and out-scored the Lady Bears (1-3) by 14 in the paint.

The Colonels held Morgan State to 29.6 percent shooting from the field.

EKU led by just one point entering the fourth quarter, but scored the first seven points of the final frame to take control of the game.  Two lay-ups by Abby Wright sandwiched around a free throw by Mariah Massengill stretched the lead to 52-46 with 8:25 left in the game.  Cooper’s lay-up at the 6:05 mark capped the run and put Eastern in front by eight, 54-46.

The Lady Bears didn’t score their first points of the quarter until less than five minutes remained in the game.  MSU started the fourth 0-for-9 from the field with two turnovers.  However, a three-pointer by Taylor Miller with 4:59 on the clock made it a five-point game.

Morgan State closed to within two, 55-53, on a pair of free throws from Jihayah Chavis with 2:49 to go, but that is close as the Lady Bears would get.  The Colonels got a pair of offensive rebounds on the other end before O’Bannon went to the line and made 1-of-2 attempts.

Shavontae Naylor came up with a steal on MSU’s next possession and then converted the lay-up into a five-point advantage, 58-53, with just over two minutes remaining.  A jumper by Cooper and two Massengill free throws stretched the margin to eight, 64-56, with less than a minute to play.

The Colonels will conclude the event on Saturday against Western Michigan University.  Tip-off in K.C. is scheduled for 2 p.m. ET.