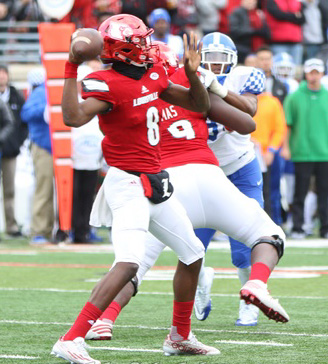 Lamar Jackson has electrified crowds since he was a kid.  He wowed everyone in Boynton Beach High School in Florida often making plays that left even his coaches amazed at what he could do.  Still, a number of coaches recruited him to play other positions instead of his true position of quarterback.

In comes Louisville head coach Bobby Petrino.  He returned to Louisville for his second tenure and needed a quarterback that could change the game.  According to Jackson, Petrino did not sugarcoat anything.  He told him and his mother he was recruiting him only as a quarterback and that he would get every opportunity to play right away.

Jackson was in starting backfield during his first college football game against the Auburn Tigers.  His first play as a Louisville Cardinal is one he would like to forget as he threw an interception.  U of L would go on to lose that game.

An up-and-down season followed as the Cardinals finished the regular season at 7 – 5.  Jackson, along with Reggie Bonnafon and Kyle Bolin, shared the starting job throughout the way.  Bonnafon and Bolin had struggled along the way and Jackson, although he was a true freshman, showed the obvious signs that with a year under Bobby Petrino he was destined for greatness at Louisville.

Jackson finished his freshman season with 1840 yards passing with 12 touchdowns.  On the ground he ran for 960 yards and 11 touchdowns.

Fans and coaches knew Jackson was good, but what was to come was beyond even our wildest imaginations.  How special was it?  He threw for 3,390 yards and 30 touchdowns.  He ran for a U of L record 1538 yards and 21 touchdowns.  A total of 4,928 yards and 51 touchdowns.

People talk about the “Heisman moment”.  What was Jackson’s Heisman moment?  It could have been the eight total touchdowns against Syracuse.  Maybe it was “the leap” over a Syracuse defender for a touchdown.  It could have been the unbelievable performance against Florida State in which he led the Cardinals to a 63 – 20 victory.  Could it have even happened in a loss?  He threw for 295 yards and one touchdown and also ran for 162 yards and two touchdowns in a 42 – 36 loss to Clemson.  The truth is that you can’t point to just one moment because most of his season was a Heisman moment.

And now Jackson will not be known as just the Louisville quarterback or the sport’s most electrifying player.  He will always be referred to as Heisman Trophy winner Lamar Jackson.