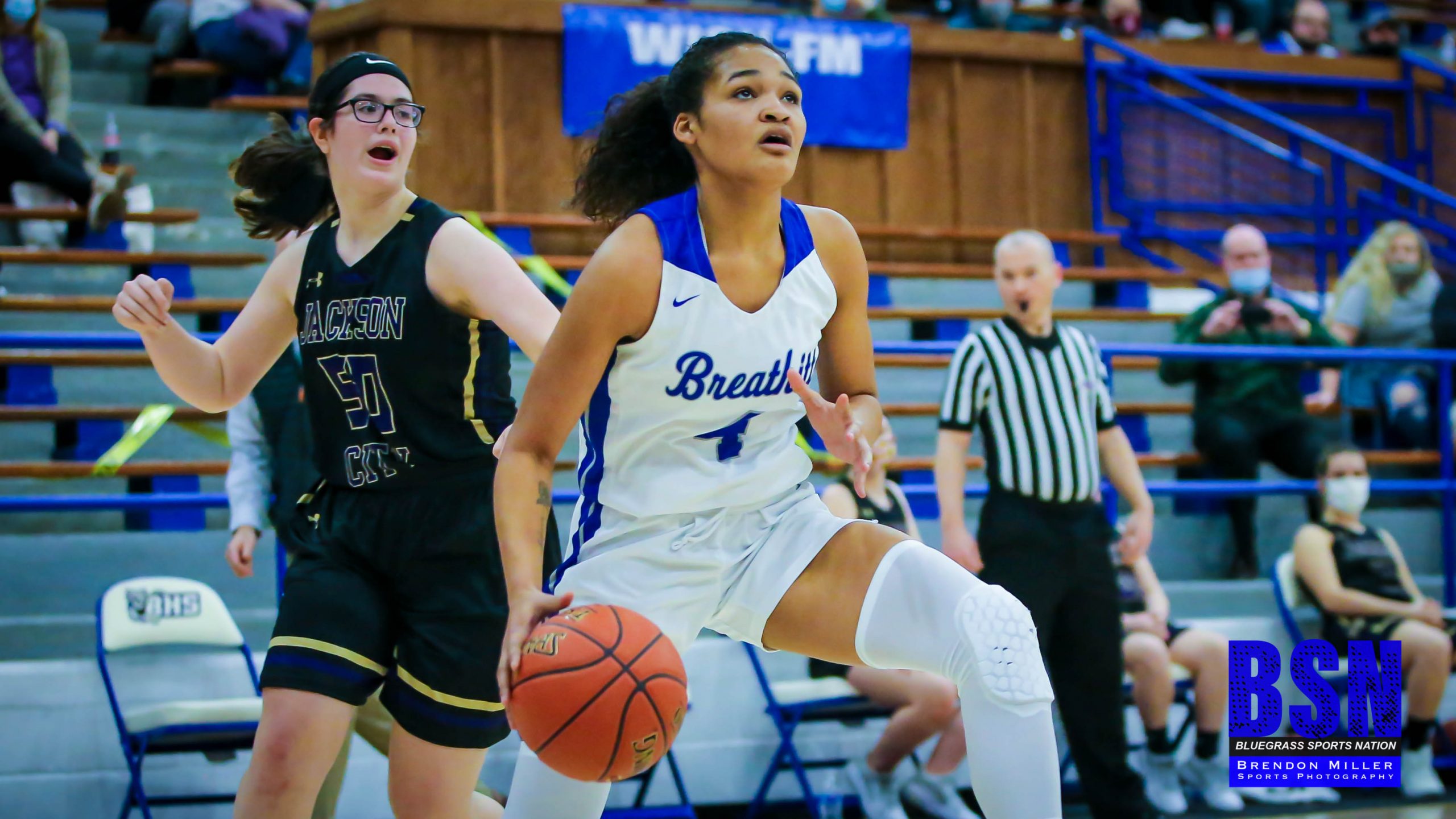 Schutz has 29 as eight LadyCats Score in the game

55th District Rivals Jackson City and Breathitt County got together on Tuesday night for the second round of their yearly home and home for District Seeding in 2021. Breathitt came into the game at 8-4 and winners of six of their last eight, while Jackson was 3-8 and had won one of their last eight. The two played a 54-52 nail biter on January 22nd as Jackson stormed back in the 4th Quarter after Breathitt had built a big lead.

The two big names in the game were Juniors BreAnna Tincher and Adreonna Schutz. Schutz posted the almost unheard of Quadruple Double in her last game Red Bird on Saturday with 23 points, 15 rebounds, 10 steals and 10 blocks. Tincher is currently the leading scorer in the Commonwealth averaging 30.2 points a game. Both would lead their teams in scoring on the night.

Schutz was unstoppable posting a triple-double with 29 points, 20 rebounds and 12 blocks!!

2nd QUARTER
Breathitt kept going to Schutz and she kept getting to the line. Adreonna had five on a basket and 3 of 6 at the line. Bush added three, Clemons and Maddie Haddix each had two. Riley Turner was the offense of the Lady Tigers as she scored Jackson’s only three field goals while Tincher was 3 of 4 from the line. At the half, Breathitt led by eight, 29-21.

3rd QUARTER
Schutz scored six, all from the line in shooting 6 of 8. Clemons and Emalee Watts each hit 3-pointers and Bush and Brenley Gross each had a basket. Tincher had two baskets and totaled five, Riley Turner hit a 3-pointer and also had five, while Addie Turner hit her second 3-pointer of the night. Headed to the 4th, Breathitt was up 12, 46 – 34.

4th QUARTER
Riley Turner hit her second 3-pointer and Tincher scored six to post her team-high 19. Schutz finished her big night with nine, including four field goals, for her game-high 29. The LadyCats were only 3 of 9 at the line in the quarter, and were 17 of 34 on the night.

RESULT – Breathitt is now 9-4 on the season and 2-1 in 55th play while Jackson is 3-9 and 0-3. Both are currently looking up at Wolfe County for District seeding with both set to play at Wolfe County in the next two weeks with Jackson City visting Campton on Friday, February 19th, and Breathitt on Monday, February 22nd. We will have both of those game LIVE here on BSN!