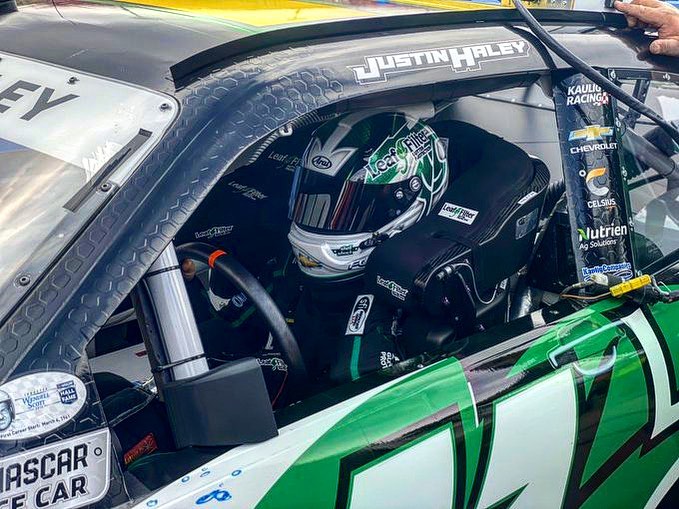 A year ago, Justin Haley won the NASCAR Cup Series Coke Zero Sugar 400 at Daytona International Speedway in improbable fashion, having been declared the winner in a race that was cut short due to inclement weather.  Friday, he won the NASCAR Xfinity Series Wawa 250 At DAYTONA in a manner that was almost as unexpected.

Haley, driver of the No. 11 Chevrolet for Kaulig Racing, was running fourth as the pack of cars headed through turns three and four on the final lap. His Kaulig teammates – AJ Allmendinger and Ross Chastain – were running 1-2 when Chastain tried to pass Allmendinger for the lead. Instead, Chastain tagged the left rear of his teammate, sending both cars into the wall as Haley surged past to take the checkered flag. It’s his second straight triumph on a Super Superspeedway, winning at Talladega in June.

“It was an amazing effort by Kaulig Racing,” Haley said.  “I hate that AJ and Ross got together.  Matt Kaulig (Owner) and Chris Rice (President) have built a team and a family.  We all work as one.

“We got a little lucky.  I was a little frustrated, but that’s why you never give up.  These things are so unpredictable.  It was an incredible effort by everyone here today.”

While Chastain certainly felt bad about affecting Allmendinger’s opportunity for the win, the driver from nearby Alva, Florida has a singular mindset.

“It’s terrible to run into your teammate like that,” Chastain said.  “It’s unfortunate.  I did everything right all night.  We just have to win.  On the last lap I don’t back down. I’m going for the win.  Coming to the checkered flag what am I supposed to do?  Finish second?  Not this guy.”

Gray Gaulding, who was running a one-off race for Chevrolet, also benefitted from the last-lap mishap and finished second.

“I played offense all night and came here to win,” an excited Gaulding said afterwards.  “I just came up one spot short – just to have a shot to win at Daytona.  I’m a kid from a small town (Colonial Heights, Va.) who sat in the grandstands and dreamed about being here.  I’m so appreciative.”

The complexion of the race was altered drastically on lap 41 when a multi-car wreck collected 13 cars. This included a pair of pre-race favorites in Noah Gragson and Brandon Jones, who ranked 3rd and 9th in the points standings entering the race.  Just one lap after taking the green flag following the caution, Justin Allgaier – winner of last Saturday’s Xfinity Series race in Dover – exited the event after being involved in a six-car incident.  They were two of seven caution flags that were brought out before the conclusion of Stage 2.

Haley won Stage 1 of the race while Allmendinger claimed Stage 2. There were nine lead changes among seven drivers and eight cautions for a total of 28 laps.

The August race weekend at Daytona International Speedway will conclude on Saturday with the running of the Coke Zero Sugar 400 at 7:30 pm (NBC), the last-chance race to make the 2020 NASCAR Cup Series Playoffs. William Byron sits on the bubble in the 16th and final playoff spot, just 4 points ahead of his Hendrick Motorsports teammate, Jimmie Johnson, a three-time DAYTONA winner.

A limited number of fans will get the opportunity to see the much-anticipated regular season finale. Fans can get tickets, which start at $49 (both races included) for adults and $10 for kids 12 years old and younger, by visiting www.daytonainternationalspeedway.com or calling 1-800-PIT-SHOP. It marks the first time in history that the summertime classic, normally run around July 4th since 1959, will serve as the NASCAR Cup Series Playoff cut-off race.