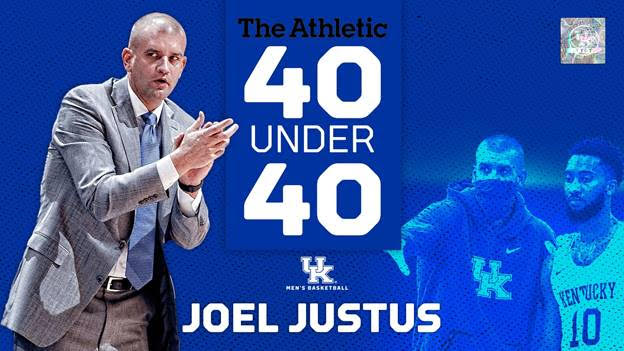 Kentucky men’s basketball assistant coach Joel Justus was ranked by the Athletic as one of the most influential people in college basketball younger than 40 years old.

The “40 Under 40” list is comprised of figures of all ranks, head coaches and assistants included, that features “people in all corners of the sport who are planting in the grass roots, toiling behind the scenes, speaking in front of a camera or efforting at a desk.”

Justus, 38 years old, was also on ESPN’s “40 Under 40” list released over the summer that featured coaches only.

Seth Davis, managing editor of the Athletic, headed up the list and had this to say about Justus:

“In 2014, John Calipari hired Justus to be Kentucky’s director of analytics. That was a big leap from Justus’ previous job as the coach at Davidson Day High School in North Carolina, but he has continued to elevate. The following year Justus became special assistant to the head coach, and over the past two seasons he has worked as a fulltime assistant. With the summertime departure of Kentucky’s top assistant, Kenny Payne, for the New York Knicks, Justus will have an expanded role for the Wildcats this season. The increased responsibilities and exposure should put him in line to become a college head coach in the near future.”

Justus is entering his fifth season as an assistant coach after serving two additional seasons on staff, first as the director of analytics and then as the special assistant to the head coach.

During the 2018-19 season, as Kentucky advanced to another Elite Eight, Justus played a key part in the development of SEC Co-Defensive Player of the Year Ashton Hagans. He also worked closely with NBA first-round picks Keldon Johnson and Tyler Herro. Justus played a similar role with 2020 SEC Player of this Year Immanuel Quickley and projected lottery pick Tyrese Maxey last season.

Justus joined the staff for the historic 2014-15 season as the director of analytics. Using Justus’ analytics, Kentucky’s players bought into a two-platoon system that helped the Wildcats become one of the most efficient teams in the country, including the most dominant defensive team in recent memory, as UK became the first team in college basketball history to start a season 38-0.