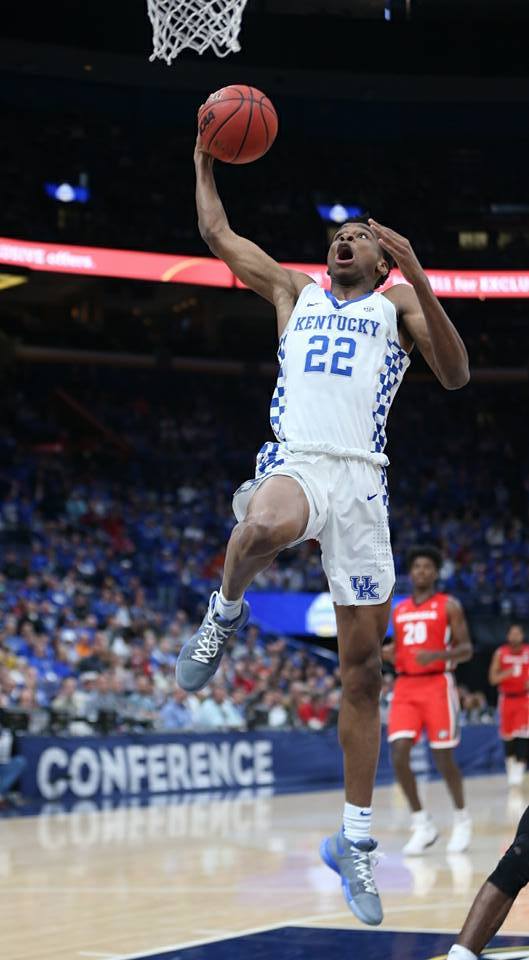 Alexander with the drive – Photo by Brendon Miller

St. Louis, MO – Kentucky came out with an aggressive energy in their 62-49 win over the Georgia Bulldogs in the quarter final round of the SEC tournament today. It was the defense for the Wildcats
that led to the victory. The Cats held Georgia to 28 percent shooting from the field in the game and they put a clamp on Bulldogs all-SEC first team player Yante Maten, who only scored 9 points and was 2 for 10 from the field.
Kentucky’s offense was balanced with three players scoring in double figures. Freshman forward PJ Washington led the way with 18 points followed closely by fellow freshmen Kevin Knox and Shai
Gilgeous-Alexander who each chipped in 15 points. Knox also had 9 rebounds, while Gilgeous-Alexander had 9 assists in the game.
The most promising part of Kentucky’s offense today was that they had 14 assists on their 26 baskets, which demonstrates the kind of teamwork that Coach John Calipari has been calling for while his team still tries to find their identity.
The Wildcats came out of the starting blocks with a fire that was missing from their last game and they were driving to the basket with every possession. It seemed to work as Kentucky went out to an early 8- 2 lead. Georgia steadied itself and fought back to take a 23-22 lead with three minutes left in the half, but Kentucky went on an 8-0 run and held Georgia without a point for the remainder of the half to take a 30-23 lead in at intermission.
In the first half Kentucky freshman point guard Shai Gilgeous-Alexander had 10 points as he consistently drove to the basket for layups. Fellow freshman Kevin Knox had 8 points and led the team in rebounds in the first 20 minutes. Knox had 5 rebounds at the first half.
The Cats had to play today’s game without freshman big man Jarred Vanderbilt who re-injured his foot this past week and is unlikely to play in the tournament.
Kentucky has now won five of their last six games and they seem to be jelling at just the right time.
As the Wildcats entered SEC tournament play today, they are in the process of trying to bring home the school’s 31st SEC tournament title. Which is four more than all the other SEC schools combined.
Winning the tournament will not be an easy task for this young Wildcat team who entered the tournament as the number four seed. With this win over Georgia, they move into the semi-finals to
take on the Alabama Crimson Tide, who upset the number one seeded Auburn Tigers in the first game today.
Kentucky’s game with Alabama will be televised by ESPN tomorrow and will start at 1:00 P.M EST.