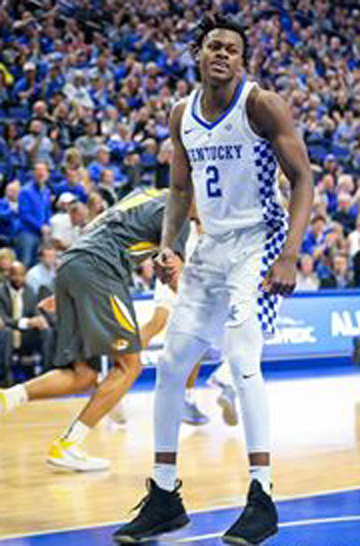 The Missouri Tigers came to Rupp Arena trying to beat the Wildcats for the second time this year. The Cats were playing to guarantee their spot in the NCAA Tournament and perhaps get a couple byes for the SEC Tournament. Both teams came out of the locker rooms ready to play. It was a great defensive effort early in the game for both teams, but the Wildcats were too hot to be held.

In the first half the Cats were almost perfect from behind the arc hitting 8 of their 10 shots. While the Tigers were 6 for 18 at the trifecta. Kentucky played with much more hustle grabbing 19 first half rebounds while Missouri only had 11 rebounds. The most impressive player on the floor was Jared Vanderbilt. He had 10 rebounds in only 13 minutes of game time. The Wildcats continued to play well even after Kevin Knox left the game with 12:55 left in the half with his second foul. Kentucky didn’t allow Missouri to score a field goal for the last 3:45 of the half taking a 44-32 lead.

The Cats continued to overpower the Tigers in the second half. Great defense earned the Wildcats a 22- point lead after a made 3-pointer by Hamidou Diallo with 8:42 left in the game. The Tigers would not make another push to get back in the game and the Wildcats cruised to an 88-66 victory.

Kevin Knox was the leading scorer for Kentucky with 21, but the MVP of the game was, with no question, Jared Vanderbilt. Vanderbilt ended the game with his first ever double-double with 11 points (4/4 fgs) and 15 rebounds. His hustle and ability to rebound at an incredible rate pushed the Cats to past the Tigers.

This is the game that the Big Blue Nation have been waiting for. Anticipation for the upcoming tournaments are at the highest it has been all season. The Cats are playing the best basketball at just the right time. We all wondered if they would get their act together and tonight the Wildcats answered that.

The Wildcats take the floor against Ole Miss at 7pm on Wednesday Feb. 28th.