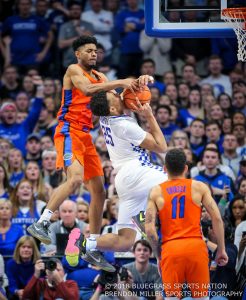 Rupp Arena- The University of Kentucky and the Florida Gators took the court for tonight’s game.  The game is a battle of SEC EAST opponents and has become one of the better rivalries in all the country.  The game is featured as the ESPN College Game Day, Game of the Week.  The College Game Day Crew consisting of Analysts, Jay Williams, Jay Bilas, Seth Greenberg and is hosted by Reece Davis.  Davis also hosts ESPN’s College Football Gameday.  The game is Broadcasted by Jay Bilas and Dan Shulman, two of the great broadcasters in the sport.

Florida entered tonight’s showdown with a 13- 5 record overall and 5-1 in SEC play.  The Gators are currently leading the SEC and tonight’s matchup with the Wildcats could be a determining factor in crowing the South- Eastern Conference Champions.  Florida has played their best basketball of the season winning eight out of the last nine games, only loosing at Ole Miss on January 13th 2018.  Kentucky entered tonight’s game with a 14-4 record overall and 4 and 2 in SEC play.  The last two weeks of the season has been challenging for the young CATS as they have suffered two losses on the road.  Tennessee Defeated the CATS by nine points on January, 6th, 2018 UT 76- UK 65.  This past Tuesday UK blew a large lead late in the game and was defeated by South Carolina 76-68.  UK and Florida are two of the most historic programs in the History of the Southeastern Conference.  Both Schools have won multiple National Championships. Both schools has also appeared in multiple Final 4’s in the last 10 years.  Florida has 2 National Championships during the Billy Donovan Era, and was the last team to repeat as NCAA Champions during the 2006 -2007 season.   Florida’s  last appearance in the Final Four was the 2013- 2014 season.  Tonight’s matchup against SEC Rivalries Florida and Kentucky and the team’s being the two premiere teams in all the Southeastern Conference is the reason why College Game Day Chose Rupp Arena to showcase the game with a primetime spotlight.

The Return of Green and the debut of Jarred Vanderbilt

Two of Kentucky’s star freshmen has recently been sidelined with various injuries.  Quade Green who has been a starter most of the season has been sidelined with a nagging back injury for the last three games.  Green was warming up with the team and looked to be confident in his abilities shooting and scoring the ball.  Green entered the game mid-way through the first half.  Fellow Freshmen Jared Vanderbilt made his season debut on January, 16th 2017 against the South Carolina Game Cocks. Vanderbilt missed the first seventeen games of the season suffering from a left foot injury, dating back to his high school career.   Vanderbilt was very impressive in his debut on the road scoring six points, grabbing five rebounds, three assists in fourteen minutes of game action.  Vanderbilt showed his versatility being a skilled passer, and a big center that can bring the ball up the court.  Vanderbilt entered tonight’s game early in the first half and was a factor against the more experienced Florida Gators team that consists of several upperclass men and a team that competed in the Elite 8 of Last year’s NCAA tournament.  Vanderbilt has never played in a game at Rupp Arena this season, and making his debut against SEC rival Florida Gators and during College Game day, has got the fans and coaching staff excited about the star Freshmen’s potential.

Kentucky gets the tip on the opening possession.  The CATS settle for a quick three point attempt but were unsuccessful in scoring.  Florida Gets the ball also tries a quick three point basket on the Gators opening possession.  Neither team scores the ball on the opening possession, but Florida opens the scoring on the next possession as Keith Stone Connects with a corner three, with 18:47 remaining in the first half.  Kentucky counters on the next possession as Kevin Knox, knocks down a jumper from inside the arc.  The teams trade baskets on the next couple of possessions, but Florida still leads 6-4 with 17:11 remaining in the half.  Calipari needed a spark off the bench and sent in Sophomore reserve Wenyen Gabriel.  Gabriel played great as he rebounded the ball and scored on multiple possessions the CATS rallied around Gabriel’s play and developed a three- point lead 13-10 with 13:23 remaining in the first half.  Rupp Arena were now excited and the fans come alive with the CATS chant and Go Big Blue. Gabriel’s hustle and rebounding contributed to ten out of the first seventeen points for the CATS.  UK turns up the defensive pressure and forces Florida into a thirty- five second shot clock violation.  The game is going in Kentucky’s favor the first part of the first half.   The team was hustling for the ball diving on the court multiple times to capture loose balls, the Starters didn’t play their best game, but the bench play of Gabriel, Jones Vanderbilt, and Green made up for the lack of scoring from the starters in the first half.  The last four minutes of the game UK reverted to playing like inexperienced Freshmen forcing bad shots, committing multiple turnovers, and settling for contested three point shots.  The play by UK during this time allowed Florida to go on an eleven – zero run taking a one- point lead Florida 29- Kentucky 28 with 2:20 remaining in the first half.  Kentucky ties the game back up at thirty-one as Nick Richards knocks down two consecutive free throws.  Florida scores late in the half with a jump shot by KeVaughn Allen, and the Gators take a two- point lead to the locker room.  Florida 33- Kentucky 31.

Nick Richards ties the game at thirty- three with a strong two hand slam to open the scoring in the second half.  Florida’s veteran play of Senior Guards Chris Chiozza, and Keith Stone started connecting on three-point baskets, and forcing UK point guard Alexander into turnovers while scoring on the other end.  Kentucky struggled to score the ball and Florida started to develop a comfortable lead of eight points at the First Media Timeout.  With 15:39 remaining in the second half Florida leads 45-37.  Alexander settles down after the timeout and UK begins to mount a comeback.  One play that impressed the Rupp Arena Patrons involved Alexander breaking down the defense and throwing an over the top lob to Forward P.J. Washington.  Washington finished the play with a strong two hand slam, again bringing the decibel rating of Rupp Arena up a couple of notches.  Coach Cal needed energy and inserted Reserve Forwards Wenyen Gabriel and Sacha Killeya-Jones.  Both players made impressive plays and help contribute with the attempted Wildcat comeback.  On one play Gabriel dove on the floor forcing a tie up with Florida’s Hayes.  UK regained possession, and Jones slams the ball with a vicious one hand slam off the Quade Green Miss.  UK cuts the deficit to two points, Florida 45- Kentucky 43 with 11:58 remaining in the half.  Kentucky has made a three- point basket for the last 1031 Consecutive games.   The Streak was very much in question in today’s game against the Gators, the Wildcats were 0-7 shooting the three, until Hamidou Diallo connects with a three- point basket.  8:08 remained in the game, with the made shot UK cuts the deficit to one point.  Florida 51- Kentucky 50.  UK continues to build on the momentum as PG Alexander scores two points with a driving layup in transition.  Kentucky is now leading Florida 53-51 with 6:21 remaining in the game.  The CATS heat up from behind the ARC as Alexander scores with a three- point basket late in the shot clock, UK leads 56-55 with 3:45 left in the game.   Florida has played in challenging road opponents before and was not fazed on how the Wildcats was playing or how loud Rupp Arena was.  The Gators make a run off its own and rely on Senior Point Guard Chris Chiozza to close out the cats, as the point guard scores several baskets including a contested three- point basket.  Florida Starts to get a little breathing room as the Gators lead the Wildcats 62-58 with 2:02 remaining in the game.  Florida continues to build on the lead and looks to put the game out of reach, leading by six points Florida 64- Kentucky 58 with only forty- four seconds remaining.  The Wildcats could have easily folded, but the team attempted to make one final rally.  Kevin Knox and Wenyen Gabriel connect on back to back three- point baskets and the Wildcats only trailed by two points with twenty- seven seconds remaining.  Florida 66- Kentucky 64.  Kentucky has the ball after stopping the Gators from scoring with the same score UF 66- UK 64.  The game ends with two very controversial non-foul calls, which could have been free throw shooting opportunities for the CATS, but wasn’t called.  The last play UK fed the ball down low to Washington, Washington appeared to get fouled hard by Florida’s Jalen Hudson, but again the guys in stripes didn’t see it the way the UK fan base did and was a non-call.  The UK fan base was furious, and rightfully so.  Florida hangs on to defeat the Kentucky Wildcats 66-64.

Florida improves on the season with a record of 14-5 and 6-1 in SEC play.  The Gators are in the drivers seat of SEC standing’s with only eleven conference games remaining in the season.  The Gators will stay in Gainesville the next week as hosting South Carolina Gamecocks on January, 24, 2018 and Baylor University Bears on Saturday January 27, 2018.  The Gators win streak extends to two games.  Kentucky drops on the season with a record of 14-5 and 4-3 in SEC Conference play.  Kentucky is on a two game losing streak and has been defeated on three out of the last five games.  The consecutive defeats will likely drop UK from the top 25 rankings.  Kentucky was ranked #18 in the Coaches Poll entering the week, before the CATS lost two Consecutive.  Kentucky hosts Mississippi State on Tuesday January, 23, 2018 and will travel to Morgantown, West Virginia on Saturday January, 27, 2018.  The Wildcats take on the West Virginia Mountaineers in the SEC/ BIG 10 Challenge.   The game will be featured on ESPN’s College Game day for the second consecutive week.  Kentucky will finish the Regular Season with a rematch against the Florida Gators on Saturday, March, 3rd, 2018.  The Game will be part of Senior day activities at the University of Florida and will provide a daunting challenge for the Wildcats.