Kentucky Goes on the Road and Defeats Virginia 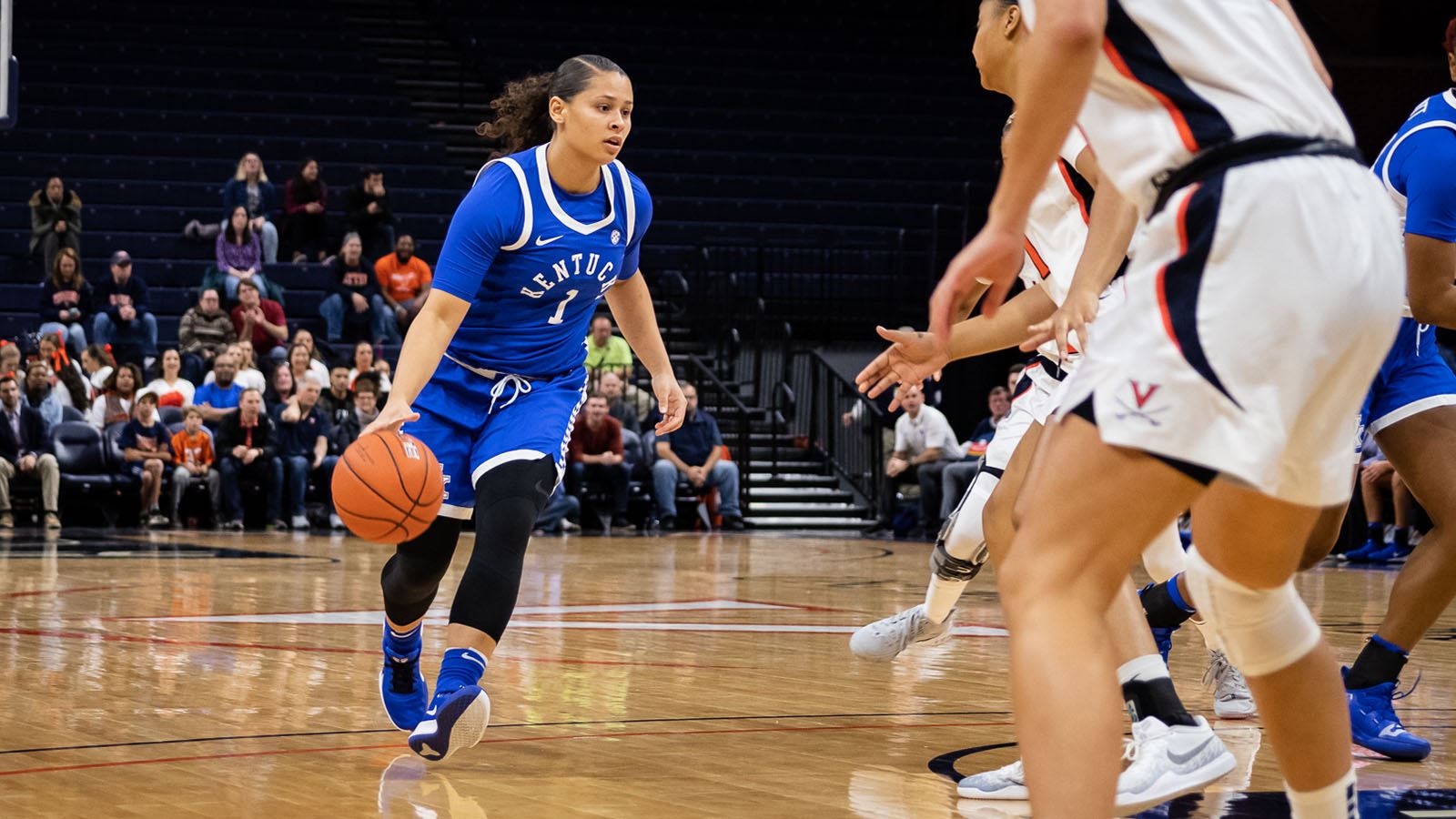 No. 13 Kentucky wins to remain unbeaten

CHARLOTTESVILLE, Va. – Sabrina Haines scored 17 points and Rhyne Howard had a double-double with 13 points and 11 rebounds as the 13th-ranked Kentucky women’s basketball team held off Virginia 50-47 on Saturday at John Paul Jones Arena.

Kentucky scored the first four points of the game, on baskets by Haines and Tatyana Wyatt. But Virginia responded with the next seven to grab a three-point lead. That streak was snapped on a Blair Green layup with 4:45 left in the first period. Haines followed with a three-pointer to give the Cats a 9-7 advantage. From there, the game would be tied at nine, 11 and 12 before Howard nailed a three-pointer with two seconds left in the quarter to give the Cats a 15-12 lead after 10 minutes of play.

Kentucky would go nearly eight minutes without scoring, a streak that was broken on a Wyatt three-pointer with 32 seconds remaining in the half. But the Wildcats’ defense kept the team in the game, and UK trailed by just one, 23-22, at the half. Haines led UK with eight points in the first half, while Wyatt had five.

In the third period, Virginia scored first to lead 25-22 before UK got a basket from Haines to cut the lead to one, 25-24. As they did in the second period, the teams struggled from the floor in the third, with the Cats hitting just one of their first five while the Cavs hit one of their first three. Kentucky regained the lead, 27-25, on a three from KeKe McKinney with 6:16 left in the third.

The McKinney field goal seemed to briefly ignite the Kentucky offense, and the Cats went on an 10-0 run to lead 32-25 with 5:00 left in the third period. UVA would finally stop the streak on a three by Dylan Horton, but the Cats would lead 34-30 after three quarters.

In the fourth quarter, UVA scored first, but Kentucky got a three-pointer from Howard and a layup by Haines to extend the lead to 39-32. The Cavs would fight back and would get within two, 44-42, with 3:01 to play, but Kentucky would not give the lead away. Haines hit a pair of free throws and Howard scored on a layup to give the Cats a 48-42 advantage with 2:17 left in the game.

UVA would not go away quietly, as standout Jocelyn Willoughby nailed a three-pointer with 44 seconds remaining to cut the UK lead to one, 48-47. After a Virginia steal, the Cavs had a possession with a chance to lead, but a long three-pointer missed, and Howard made a pair of free throws to seal the victory for the Cats.

Kentucky returns to Memorial Coliseum on Thursday, hosting intrastate rival Morehead State. Tipoff is set for 7 p.m. and the game can be seen on SEC Network Plus.