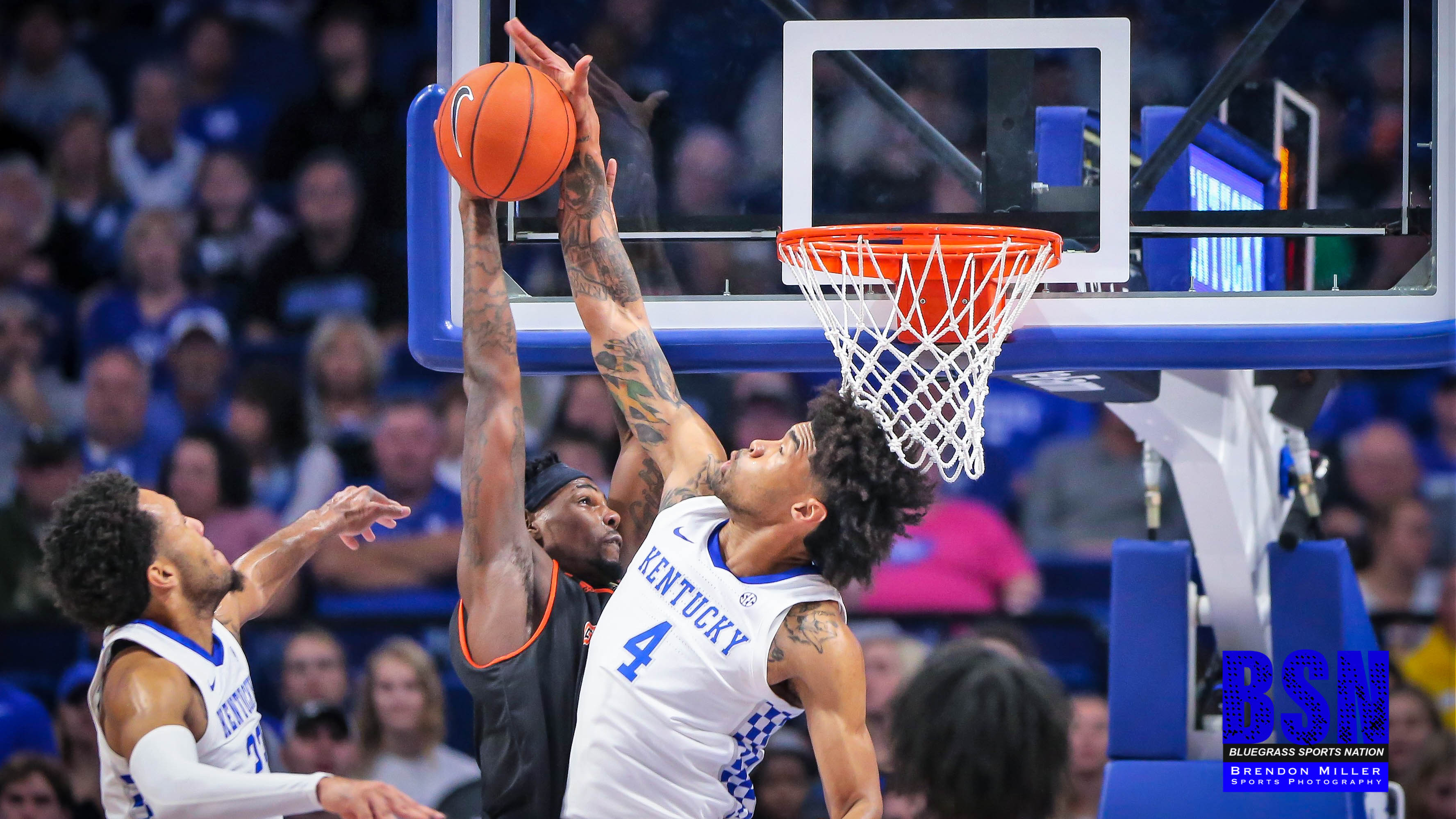 By KEITH TAYLOR, Kentucky Today – Printed by BSN with Permission

LEXINGTON, Ky. (KT) —Kentucky had no trouble with Georgetown College in the first of two exhibition games Sunday night.

Although the Wildcats rolled past the defending NAIA national champions 80-53, the team’s roster dwindled after junior forward Nick Richards suffered a lower leg injury early the second half and didn’t return. Prior to the injury, Richards made all three of his attempts from the field, scored six points, and had five rebounds in 15 minutes.

“He’s swelled up,” Kentucky coach John Calipari said. “The (trainers) told me he rolled it pretty good. I don’t know if he stepped on an ankle or just rolled it. It was swelled up.”

Richards was defending a 3-point shot by Georgetown guard Jake Ohmer when the injury occurred. He walked on his own power to the team’s locker room.

Kentucky guard Immanuel Quickley said not having Richards in the post for an undetermined amount of time puts more pressure on the other players, especially the guards.

“That’s one of the things Cal talked about,” Quickley said. “If Nick comes back next game or not, he told all the guards to just start rebounding more. Everybody has to step up when a man goes down and that’s just how it goes.”

Quickley stepped up early offensively for the Wildcats and finished with 16 points. He scored 12 of those in the first half and made three shots from long range to ignite the Kentucky offense. Nate Sestina followed with 11 points and 10 rebounds, while Ashton Hagans and Tyrese Maxey added 14 points apiece.

In somewhat of a surprise, the Tigers outrebounded the Wildcats 45-39, with most of those rebounds coming on the defensive end of the court.

“We just touched on rebounds,” Georgetown College coach Chris Briggs said. “When they told me in the locker room that we outrebounded them, I couldn’t believe it.”

Calipari said most of those boards were the result of his team’s lack of toughness underneath.

“Most of it was just scrappiness,” Calipari said. “They played well.”

Briggs was impressed with the Wildcats and will be rooting for Calipari’s squad the remainder of the season.

“That is a really talented Kentucky team and we will be pulling for them all year long,” Briggs said. “

“I just came in here with the mindset that we just had to run the floor and be confident with ourselves,” he said. “We obviously didn’t do what we wanted. We didn’t run as much, but we rebounded well. I just thought our team could have been a little more unselfish, but besides that, I think we did fine.”

The outing wasn’t Ohmer’s first appearance at Rupp Arena. He scored 106 points in three games during Scott’s run in the 2017 Sweet Sixteen.

“He picked up where he left off in the state tournament (three years ago),” Briggs said. “(I’m) proud of him, the way he competes and the way that he battles.”