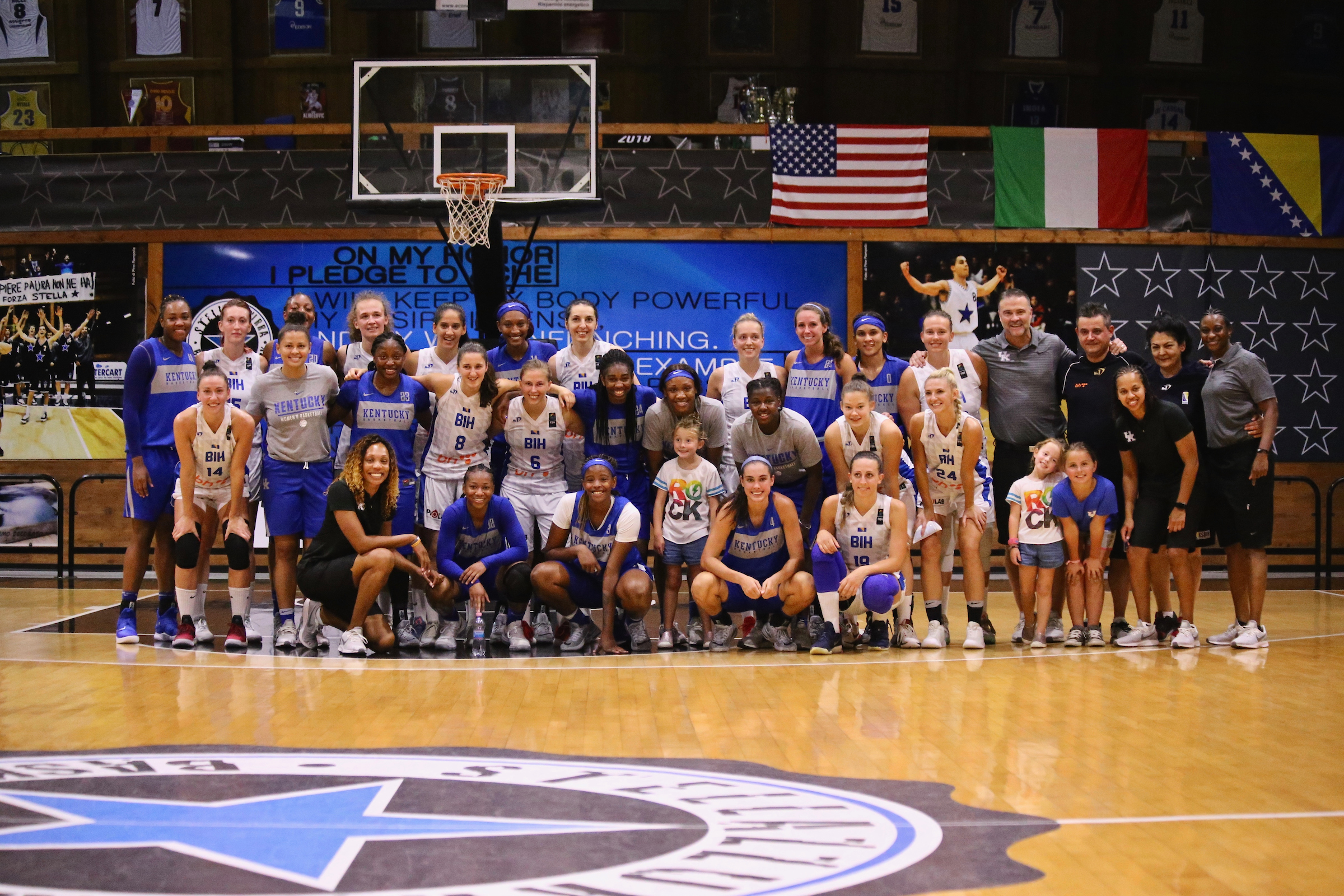 The women’s basketball team claims a 73-40 victory against the Bosnia Herzegovina National Team on Sunday, August 5, 2018, on their summer trip to Italy.
Photos by Noah J. Richter | UK Athletics

LEXINGTON, Ky. – Behind a team-high 17 points from senior guard Maci Morris, who hit five 3s in the game, the University of Kentucky women’s basketball team rolled to an impressive 73-41 victory over the Bosnia and Herzegovina National Team on Sunday at the Stella Azzurra Basketball Academy in Rome, Italy.

Kentucky led throughout the game with a 16-5 lead after the first quarter and 33-18 advantage at halftime. The Wildcats really started to find their rhythm in the second half, going 9-of-14 from the field in the third quarter to grab a 56-26 lead heading into the fourth. UK hit five field goals in the final stanza, including three 3s, to eventually claim the victory.

“There were a lot of unknowns tonight going into the game and we really didn’t know what to expect, but we knew that we have been working hard and we have been emphasizing to work really hard with a great effort and we got that tonight,” UK head coach Matthew Mitchell said. “We really didn’t know anything about our opponent but were able to jump out to a quick start and I thought our conditioning mattered. The things that we could control tonight we did well, we certainly have some improvement to make but overall I thought it was a good first game on this tour.”

Mitchell and Co. ended the game with a 39-25 advantage on the boards with 10 steals while forcing BIH into 19 turnovers. After a slow start shooting possibly due to playing on a smaller court with a 3-point line that is further away, Kentucky found their shooting touch as the game went on, hitting 42 percent from the field overall and 47 percent from long range. The Cats were 8-for-11 from the free-throw line. Defensively, UK limited Bosnia and Herzegovina to just 39 percent from the field on 13 made baskets, while BHI was just 1-for-10 from long range. Bosnia and Herzegovina hit 7-of-8 free throws for 87.5 percent.

Individually, Morris led the way for the Wildcats with her 17 points, going 6-for-13 from the field with three rebounds and two steals. Junior guard Jaida Roper posted 10 points with a rebound, going 3-for-4 from the free-throw line, while sophomore KeKe McKinney and freshman Blair Green each scored eight points. McKinney went 4-for-6 in two-point attempts with six rebounds while Green added four rebounds and a steal to her stat totals. Senior transfer Nae Nae Cole, who will sit out the 2018-19 season due to NCAA transfer rules, scored seven points going 2-for-2 from the field and 3-for-4 from the free-throw line. Sophomore post Dorie Harrison had six points with a team-best nine rebounds. Senior Taylor Murray and sophomores Tatyana Wyatt and Kameron Roach each had five points with Murray adding three rebounds and two assists, while Wyatt had six rebounds. Senior LaShae Halsel added two points off the bench with a rebound.

Kentucky is now 21-2 all-time in international play and have won 16 straight contests. The Wildcats have been in Rome the last two days and have visited the Colosseo, Piazza di Spagna, Fontana di Trevi, the Pantheon, Piazza Navona and more. UK’s next game will be Tuesday, Aug. 7 vs. TK Hannover in Florence. The foreign tour is the first for the UK program since traveling to France and Switzerland in May of 2001.

A tentative schedule of games is below. Fans are encouraged to visit UKathletics.com or follow @KentuckyWBB on Twitter, Instagram and Snapchat, or Kentucky Women’s Basketball on Facebook for complete information and coverage of the team’s trip.