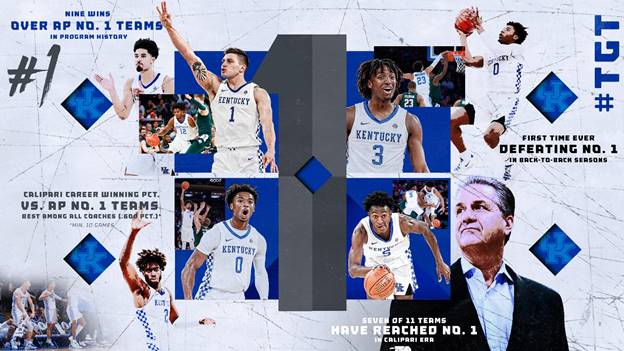 LEXINGTON, Ky. – (UK Athletics) For the seventh season in the 11-year John Calipari era, the Kentucky men’s basketball team is ranked the top team in the land in the Associated Press Top 25.

After defeating Michigan State – the previous No. 1 team – in the State Farm Champions Classic last week, and then following it up Friday with a dominating 42-point victory vs. Eastern Kentucky, the Wildcats are atop the AP Top 25 for the first time since December 2016.

The full rankings are available at collegebasketball.ap.org. The USA Today Coaches Poll will not be updated until next week.

No other school has reached No. 1 in seven of the last 11 seasons while Calipari has been at Kentucky. According to STATS, only three other programs (Duke, North Carolina and UCLA) have ever been ranked No. 1 in seven different seasons during an 11-year span.

Calipari, one of only two coaches (Frank McGuire) to lead three programs to a No. 1 ranking, is no stranger to the top spot. Dating back to his time at Memphis, Calipari-coached teams have reached No. 1 in eight of the last 13 seasons. Including his tenure at UMass, his teams have ranked No. 1 in 10 different seasons.

The Wildcats opened 2019-20 at No. 2, the 10th time in 11 seasons the Wildcats began the season ranked among the nation’s top five. UK picked up two first-place votes but won the majority of voters this week with two impressive performances.

On a national stage in Madison Square Garden in New York, Kentucky led the Spartans for most of Tuesdays matchup, which was just the second 1-2 meeting for the respective teams’ season openers in the history of the AP Top 25. UK held Michigan State to just 39.3% from the floor while freshman guard Tyrese Maxey made early-season headlines with 26 points – the most ever by a Kentucky freshman in a debut – including a game-sealing 3-pointer from four feet behind the 3-point line with less than a minute remaining.

There was no letdown Friday vs. Eastern Kentucky. The Wildcats raced to a 14-0 lead and the defense did the rest. UK held EKU to just 25.0% from the floor, UK’s best defensive field-goal percentage since holding Alabama to 22.0% on Feb. 9, 2016. Six Wildcats scored in double figures, led by junior forward Nick Richards with 21 points, 10 rebounds and four blocks.

UK is giving up just 55.5 points per game in its two wins and holding the opposition to 31.7% shooting.

The Wildcats will begin their stay at No. 1 starting Tuesday vs. Evansville. The Wildcats will play UK men’s basketball national champion Walter McCarty’s (1993-96) Purple Aces at 7 p.m. on SEC Network.