Kentucky not very sharp in 79-70 win over NKU 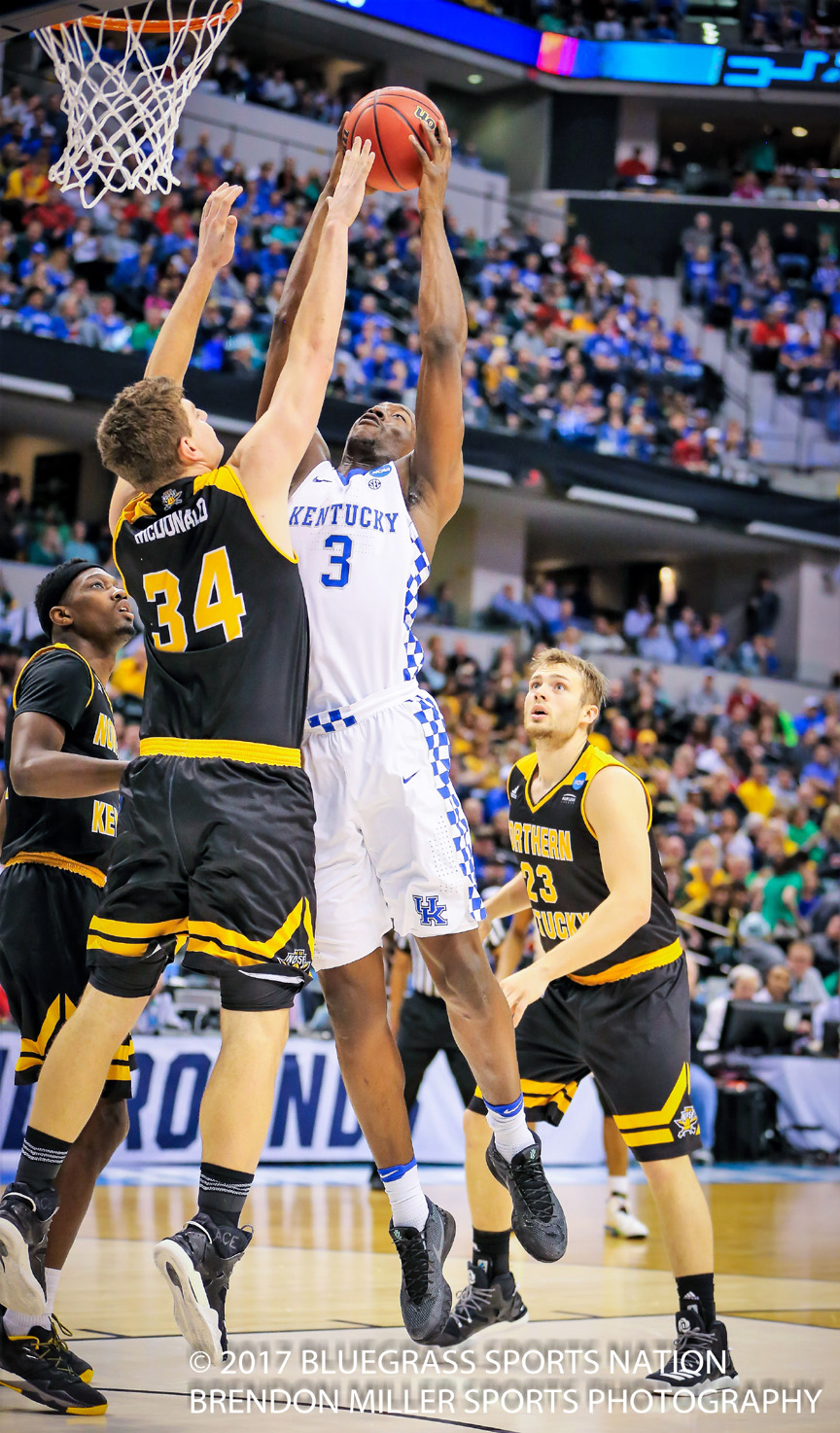 By Ricky Blair
Indianapolis, IN – March Madness is upon us and the Kentucky Wildcats started the 2017 NCAA tournament by taking on their neighbors from up north, the Northern Kentucky Norse .  The contrast in NCAA tournament history is extraordinary.

Kentucky has the NCAA tournament most all-time appearances at 56, while NKU is making their first tournament appearance.  Kentucky has appeared in the most NCAA tournament games, this was their 171st, while today’s matchup was NKU’s first.  The Wildcats have the most all-time tournament wins at 122 and the Norse…….well zero.   To be fair this is Northern Kentucky University’s first year of eligibility at the NCAA Division 1 level.  NKU has always played at a smaller level.

Once the game began, Kentucky didn’t waste any time taking the lead as DeAaron Fox made a jumper, just 16 seconds into the game to give the Wildcats an early 2-0 advantage.  NKU was unfazed and took a 7-6 lead, when the Norse’s senior guard Cole Murray made a three-pointer with 17:46 to go in the first half.  The lead only lasted six seconds, but it was a lead none the less.  The Wildcats steadied themselves and went on a small run to go up eleven (23-12), when Dominique Hawkins hit a three-pointer from the corner.  NKU then went into a zone defense that stymied the Cats’ offense for several possessions and the Norse went on a seven point run of their own, cutting the Wildcat lead to two at 23-21 with six minutes to go in the half.

Once again the Wildcats used their superior size and speed to go on another run, this time the Wildcats held it through-out the half and finished with a fourteen point halftime advantage (38-24).

Freshman center Bam Adebayo was the story in the first twenty minutes making 5 of 6 shots for 10 points and he also pulled down 9 rebounds.  DeAaron Fox also had 10 points for the Wildcats in the first half.

Kentucky played a very sluggish second half.  The Wildcats were playing like a team that knew they were going to win no matter how they played.  It is a formula for disaster, if they play this way going forward.  The first part of the second half was a very ugly display of basketball.  With eleven minutes to go in the game the two teams were a combined 6 of 35 from beyond the three-point line.  NKU was 4 of 22 for 18 percent and UK was a pitiful 2 of 13 for 15 percent.

The Cats’ twice went by as many as 18 points in the second half, but could never truly put away the Norse.  With 33 seconds left in the game NKU had actually cut the lead to seven, but 5 free-throws down the stretch by Malik Monk steadied the Wildcats and Kentucky finished with an unimpressive 79-70 win.

Kentucky was led in scoring by DeAaron Fox who had 19 points and Isaiah Briscoe who had 17 points.  Bam Adebayo had a career high 18 rebounds.

For NKU they were led in scoring by junior guard Lavone Holland Jr. who had 22 points and freshman Carson Williams who had 21.  Williams also led the Norse in rebounding with 9.

The win moves Kentucky to 30-5 on the season and it makes the fourth time in his eight years at Kentucky that coach John Calipari had reached at least 30 wins; 2010, 2012 and 2015 were the other three years.

Next the Wildcats will take on the Wichita State Shockers here at Bankers Life Fieldhouse on Sunday for a chance to move on to Memphis and the NCAA tournament sweet sixteen.