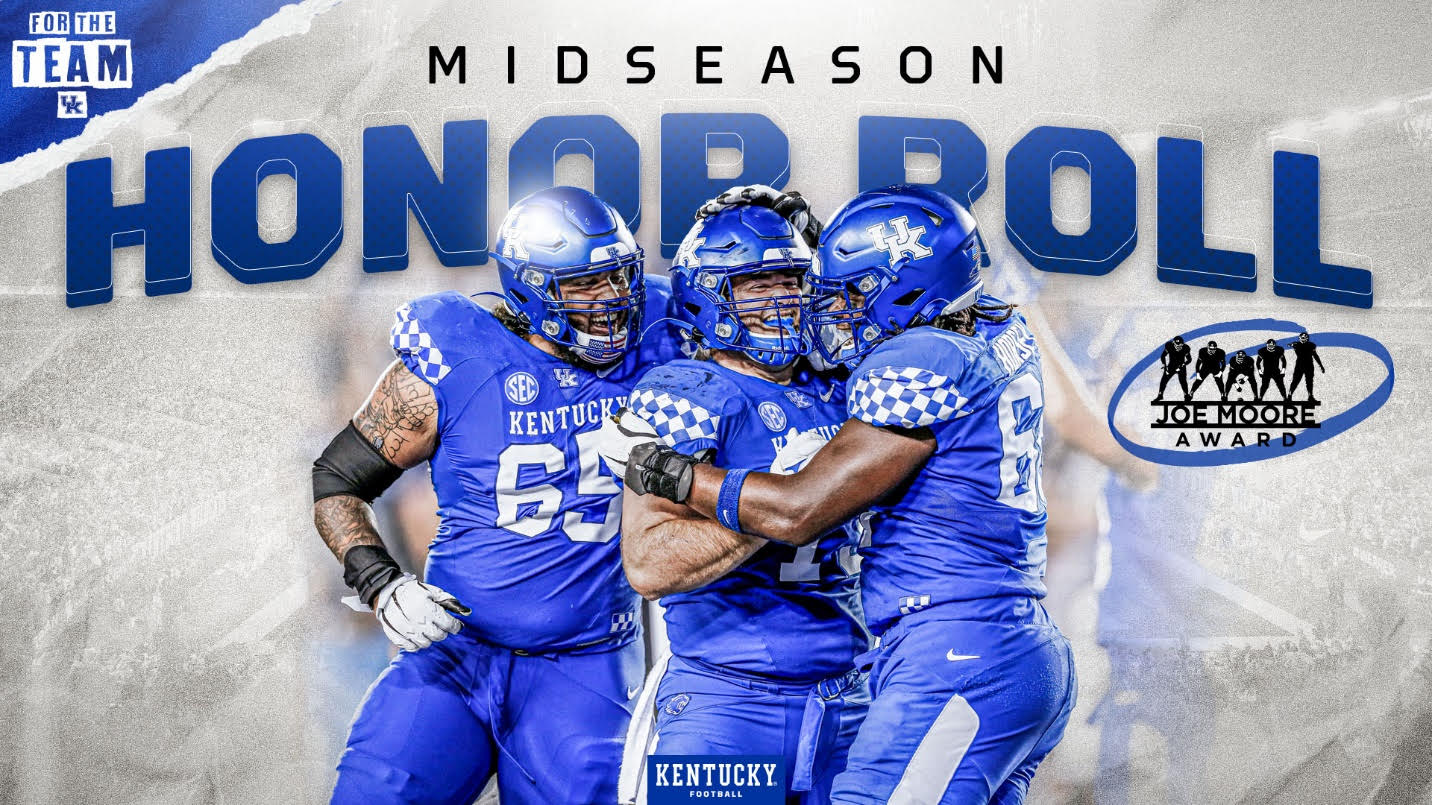 The Kentucky offensive line is one of 19 units named to the midseason honor roll for the Joe Moore Award, recognizing the Most Outstanding Offensive Line Unit in college football, it was announced Tuesday by The Foundation for Teamwork.

This is the fourth consecutive season that the Kentucky offensive line, known as the “Big Blue Wall,” has been named to the honor roll.

Behind Kentucky’s talented “Big Blue Wall,” running back Chris Rodriguez Jr. leads the Southeastern Conference in rushing and is ninth nationally in total rushing yardage. Kentucky is tied for 13th nationally with rushing plays of 20+ yards (23).

All totaled, the Wildcats have 94 combined starts on the offensive line. Senior right tackle Darian Kinnard has started in 33 consecutive games, while super senior Luke Fortner has started in 30 straight games, including the last seven at center.

The UK O-line has helped power the Wildcats to a 6-1 record and No. 15 national ranking.

After the semifinalists and finalists have been selected, a vote will be held to select the 2021 recipient of the Joe Moore Award by a voting body of 200-plus members. This voting body includes all of the current offensive line coaches at the Division I/FBS level, as well as former players, coaches, colleagues of Coach Moore and select media members.

In addition to reviewing game tape every week of the season, the Joe Moore Award voting committee will later go through each of the finalists’ season-long highlight reels and multiple back-to-back quarters of game film.

The Joe Moore Award is named after Joe Moore, widely regarded as one of the best offensive line coaches in college football history, most notably for his work at Notre Dame and the University of Pittsburgh. Coach Moore sent 52 players on to the NFL, including Bill Fralic, Mark May, Russ Grimm, Jimbo Covert and others. The Joe Moore Award trophy, crafted by legendary sports sculptor Jerry McKenna, is the largest trophy in college football, standing at a height of 6 feet and weighing in at 800 pounds. The perpetual trophy is made available for display by the winning university until the conclusion of the following college football season.