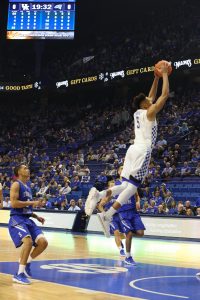 As the regular season approaches it was nice to see the CATS compete against another team.  Kentucky was a heavy favorite in the game, and realistically no one gave the Thomas More Saints a chance on beating the Kentucky Wildcats. Thomas More a Division two school from Northern, Kentucky had a starting five line-up all from Kentucky.  Several of the Saints players were UK fans growing up, and many would have come to UK if given the opportunity to play for the prestigious University.

Kentucky gets the opening tip, scoring on the opening possession with a lob from Diallo to Kevin Knox.  The play brought the Rupp Arena Crowd to its feet, and set the tempo for the game.  After Kentucky scored on the opening possession, Kentucky defense opened up with a full court press.  Calipari has never been a coach to utilize the press very often, but the length and athleticism of this year’s Kentucky Wildcats will be used more often than UK is accustomed to.  Kentucky’s offensive struggles were evident early in the game as UK missed several open Jump Shot opportunities.  Diallo who follows in the footsteps of Malik Monk, and Jamal Murray has been built as the most athletic shooting guard to dawn the Blue and White in several years.  While Diallo is an athletic phenomena Diallo shooting stroke was off as he was 3 for 8 shooting inside the perimeter and 0 for 3 shooting behind the arc in the first half.  UK did show moments of awe, with spectacular plays and good defensive pressure.  On Back to back possessions in the first half the crowd witnessed two of the most memorable moments of the game.  With 9:56 remaining in the first half Freshmen Kevin Knox steals the ball from the Saints, getting in transition with open court in front of him.  Knox finishes the play with a thunderous 2 hand dunk.  On the next possession UK again steals the ball with the steal from Quade Green, Green Finds Sophomore Wenyen Gabriel streaking down the court for an over the top lob.  Gabriel finished the play with a one hand dunk.  UK had three players get in early foul trouble during the half, Starter Nick Richards had four, Reserves Sacha Killeya- Jones and Shea Gilgeuos- Alexander each had three.  The foul issue will only improve as the season progresses, and the CATS become better conditioned.  At the half UK led Thomas More Saints by twenty- three points, Kentucky 53- Thomas More 30.

Kentucky Continued their dominance in the second half and increased the lead.  Kentucky showed glimpses of a team that can be very good in transition, athletic as any team in the country, and a defensive juggernaut.  Kentucky is deeper this year than in years past, but doesn’t have any upper-class man that will contribute to the team’s success. Basically the team’s top eight guys are either Freshmen or Sophomores.  For Kentucky to contend and advance in the NCAA tournament the shooting will have to improve.   From what I seen during the Game, UK will have to improve the shooting and shot selections.  Kentucky shot a combined total of sixteen three- point baskets during the game, only connecting with five and a 31 % shooting percentage for the game.  Kevin Knox had a great all around game, finishing with twenty- seven points, five rebounds, one block, two steals, and one block playing twenty- eight of the forty minutes during the game.  If Knox can Continue his play he will be a fan favorite come mid -season, and a potential lottery Selection in Next year’s NBA Draft.  Hamidou Diallo who didn’t shoot the ball very well from Behind the ARC being 0-3 during the game, Contributed with his raw athletic ability.  Diallo can electrify the crowd with his athleticism and displayed it several times during the game.  On one play in the Second half UK gets the ball in transition with Green Leading the break, Green Finds Diallo behind the defense.  Green throws an over the top lob to Diallo who finished with a one hand dunk.  The play was one of the highlights of the night, and impressed everyone fortunate enough to witness the play. Kentucky goes on to defeat the Thomas More Saints by forty- two points, Kentucky 103- Thomas More 61.

On the first exhibition game with competition …

“Oh yeah it was good to get out here and play against somebody else. We’ve been beating each other up for the last couple months so Coach Cal was big on us coming out here, being aggressive and making sure that we can take all the stuff we’ve been working on and put it against them.”

On how he thinks he played …

“I think I played with a lot of energy out there. There were a couple things I did wrong, and think I could have done better. As a team overall, we did pretty good though.”

Kentucky opened Exhibition play with a convincing win.  Kentucky has a lot to improve on and will take time for the team to gel.  In two weeks Kentucky will begin regular season play against Utah Valley on Friday November 10th, 2017.  Kentucky’s next exhibition will be the Kentucky cares charity classic game against The Morehead State Eagles on Monday October 30, 2017.  All proceeds from this game go to the victims of recent of the recent hurricanes of Harvey and Irma.  Bluegrass Sports Nation will be in attendance covering the game, bringing you the best possible coverage of sports in our area.