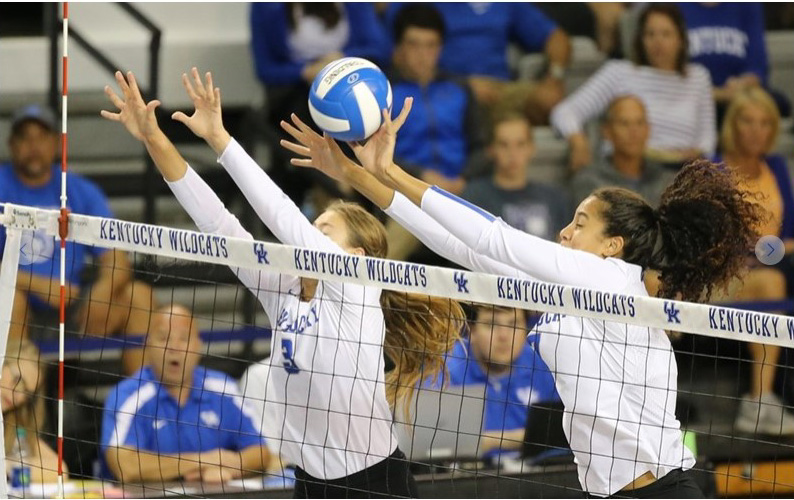 LEXINGTON, Ky. – Freshmen Avery Skinner and Madison Lilley sparked the Kentucky volleyball team to a 3-0 (25-19, 25-20, 25-21) opening-round win over East Tennessee State in the NCAA Tournament in front of 4,005 fans inside of Memorial Coliseum on Friday night.

“One of the things that we wanted to make sure happened as their outside hitters did not have a big night offensively and we did a really good job of that with our defense,” head coach Craig Skinner said. “Hats off to our fans for showing up big time tonight and being there for us. Getting over 4,000 in the first round in the NCAA tournament is an awesome deal for us and our athletes. We’re very fired up for that and hopefully they come back tomorrow.”

Playing in the first postseason of their careers, the freshman tandem exerted a level of comfortability on the big stage. Skinner accounted for a match-high 14 kills on a blistering .407 hitting percentage. She also added two digs and a block. Lilley, the Southeastern Conference’s Freshman of the Year, dished out 39 assists and continued to direct one of the most potent offenses in the nation to another stellar night. UK boasted 45 kills on a .337 attacking percentage behind Lilley’s management. Lilley also contributed four blocks and a trio of digs.

With the win, Kentucky will march forward in the NCAA Tournament and face WKU on Saturday at 7 p.m. The Hilltoppers claimed a 3-0 sweep of Notre Dame earlier in the evening.  Kentucky improves to 27-3 overall on the season. ETSU ends the year with a 19-12 overall record after advancing to the tournament on the backs of a Southern Conference Tournament championship.

Tickets to tomorrow night’s showdown between the two in-state schools can be found here. The match will also be streamed live via WatchESPN with Dick Gabriel and Mandy Robbe on the call.

Sophomore Leah Edmond was her usual steady self in another all-around effort with 11 kills, three digs, two blocks and a pair of aces. Seniors Kaz Brown, Emily Franklin, Darian Mack and Ashley Dusek also steadied the ship as the Bucs’ scrappiness made every set tight until UK was able to break free late in the frames.

Brown had six kills on a .417 attacking percentage and three blocks. Mack matched her classmates’ kill output and also added a dig and a block. Franklin had a match-high six rejections to couple with five kills, while Dusek had a team-high 12 digs and has reached double figures in every match in which she has been UK’s starting libero this season.

Freshman Gabby Curry had four digs. Juniors Merideth Jewell and McKenzie Watson contributed seven scoops between them in the winning cause.

Kentucky limited the Bucs to 37 kills on a .129 attacking clip. UK also won the battle defensively with 32 digs compared to 30 for ETSU and nine blocks to the Bucs’ two.

ETSU opened the match by scoring the first point off a kill. Brown retaliated on the next play with a thunderous hammer. The Bucs committed a hitting error and then Skinner was able to find some space for her first kill of the night and a 3-1 advantage for the Cats. ETSU fired right back with three straight to recapture the lead. Skinner answered for the Cats with a kill. Edmond was a catalyst for a 6-0 spurt for the Wildcats with two kills during the run, as well as two blocks from Franklin and Lilley to help push the score to 11-5 in favor of UK. ETSU opted to take a timeout. Following the break, Kentucky extended the run behind another kill from Edmond for a six-point advantage. A 3-0 run by the Bucs enabled the visitors to pull to within four at 15-11, but Franklin fired back with a quick kill to quell the threat. The Bucs wouldn’t go away and eventually pulled back to within three at 16-13, but Mack drilled a kill into the back row. Franklin and Lilley teamed up once again for a block and a 21-15 UK lead. It was all the closer ETSU would get as UK rolled to a 25-19 opening set victory.

The teams traded points to begin the second set with both teams benefiting from the other’s error. Lilley helped UK corral a three-point edge with a dump kill and a block alongside Brown for a 4-1 lead.  After ETSU pulled back to within one at 6-5, Franklin snapped the string of points with another kill. Two aces from Edmond and another Buc attacking error enabled Kentucky to stretch its lead to 10-5 forcing ETSU into a timeout. Brown stretched the lead to six at 15-9 with a sizzling kill. ETSU clawed back and got to within two at 17-15. Coach Skinner chose to take his first timeout of the match to attempt to slow down the Bucs. Following the break, Skinner wasted little time in hammering home a kill. ETSU continued to fight back and pulled to within one at 18-17, but Mack sliced a kill along the sideline to once again lift the Cats to a multi-point advantage. The kill sparked a 3-0 stretch for Kentucky to push its lead to 21-17. ETSU opted to burn its final timeout. After ETSU again pulled to within two, Brown drilled a kill into the middle of the floor ending the threat. The Bucs would get no closer than that margin as UK increased its lead in the match to 2-0 following a 25-20 win.

ETSU for the second time in three sets opened the stanza by scoring its first point. The Bucs proceeded to score the first three before Skinner smashed a kill. The Bucs were eventually able to claim a 10-5 advantage. Kentucky chose to take a timeout. Out of the break, Mack converted off a touch to snap the run. Skinner and Franklin then teamed up for a block. After quality defensive prowess from Jewell, Skinner laced a kill off the block for UK to get back to within two. Brown’s solo rejection coupled with an ETSU attacking error enabled the Cats to knot the score at 11 apiece. From there the teams exchanged points until UK shook loose for two straight and a 14-12 lead. A block from the duo of Franklin and Edmond promoted an ETSU timeout with the Bucs down 18-15. ETSU would not go away and pulled back to within one on two different occasions, but Kentucky answered them both. The second came at 20-19 and Skinner smashed her 11th kill of the night to quiet the threat. The kill shifted the momentum into UK’s corner and the lead quickly moved to 22-19. Following an ETSU timeout, Skinner came up with another kill and ETSU committed an error to lift UK to match point. Kentucky won the match, fittingly, off a Skinner kill for a 25-21 win.