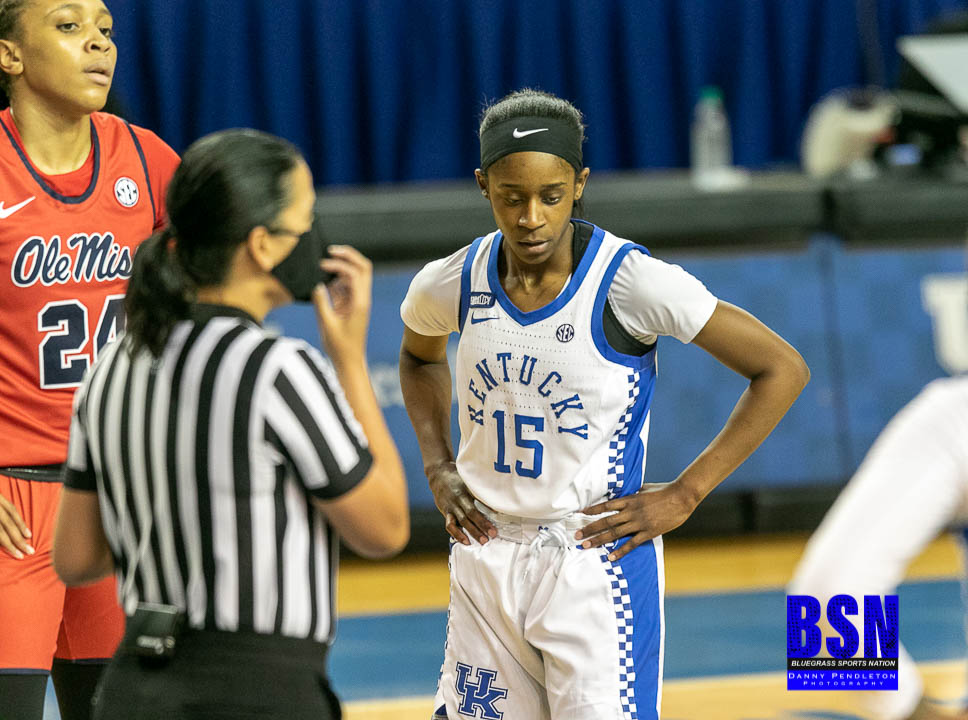 SEC Tournament is next week in Greenville, S.C.

Senior Chasity Patterson, playing her final home game, scored 18 points for the Cats, who are now 16-7 overall and 9-6 in the SEC.

Kentucky struggled shooting the ball the entire game. Kentucky made 22 of 66 (33.3 percent) for the game, including just five of 17 (29.4 percent) from three-point range.

Ole Miss got on the board first on a Donnetta Johnson jumper but Kentucky answered on a basket by Howard. That was the first of four ties early in the game before Kentucky scored five in a row to lead 12-9. After the Rebels got within one, the Cats scored 10 in a row, two free throws each by Patterson and KeKe McKinney, a layup by Edwards and consecutive baskets by Howard, to lead 22-11 with 2:04 left in the period.

The Rebels would snap the UK run on a Shakira Austin basket with 1:13 left in the period. Those would be the final points of the period, which ended with Kentucky leading 22-13.

Ole Miss would score the first two baskets of the second period to cut the UK lead to 22-17. But Treasure Hunt buried a corner three, then Robyn Benton scored on a put back to give the Cats a 27-17 advantage.

Kentucky would grab a 29-20 lead on an Edwards layup with 6:25 left in the half. From there, neither team would score for more than two minutes until Howard connected on a jumper to make it 31-20 UK with 4:13 left in the half. Those would be the Cats’ last points of the period.

Ole Miss would score on a Tiya Douglass jumper, and a three-point play by Austin to cut the UK lead to 31-25, which would be the halftime score. Austin led all scorers with 11 points in the first half, while Howard had 10.

Early in the second half, Ole Miss continued to chip away at the UK lead. The Rebels scored the first four points of the third period to make it 31-29 and to force a UK timeout. But that did not stop the onslaught. Out of the break, Ole Miss got a pair of three-pointers from Snudda Collins, first to take the lead, then to extend it to 37-31.

Kentucky finally got on the board with Edwards his a three with 6:05 left in the third period, cutting the Ole Miss lead to 37-34. The teams would trade baskets, a Madison Scott layup for Ole Miss and a McKinney jumper for UK, before Ole Miss scored four in a row to lead 43-36 with 3:32 left in the third.

The Cats would respond near the end of the third period with a 6-0 run, keyed by a basket and free throw from Howard with 1:55 left in the period which made it 43-42 Ole Miss, which would be the score through periods.

In the fourth period, the teams each made a pair of free throws, keeping the Ole Miss lead at one. Collins then hit a three to give the Rebels a 48-44 lead, but Hunt answered on UK’s next possession with a three of her own, cutting the lead back to one, 48-47, with 7:36 to play.

The Rebels would take a 51-47 lead before Kentucky mounted a run. The Cats got a free throw from McKinney, two free throws from Howard and a Patterson jumper in the lane to take a 52-51 lead. Ole Miss answered right back when Austin scored in the lane, giving the Rebels the lead back, 53-52.

Patterson would score on a driving layup on UK’s next possession as the Cats took the lead back, 54-53. But Ole Miss would get a pair of Scott free throws to re-take the lead, 55-54, with 4:18 to play. The Rebels would extend the lead to 57-54 on an Austin layup with 3:33 left in the game.

Kentucky would continue to chip away at the lead, getting within a point twice. But Ole Miss got a layup from Austin and a three from Collins to lead 64-58 with 1:07 left and the Cats simply ran out of time.

Kentucky returns to action later this week in the SEC Tournament. More information about the date, time and opponent will be determined at the conclusion of play on Sunday.