Kentucky Survives in an Instant Classic: Kentucky defeats Wichita State 65- 62 moves on to the Sweet 16 in South Region. 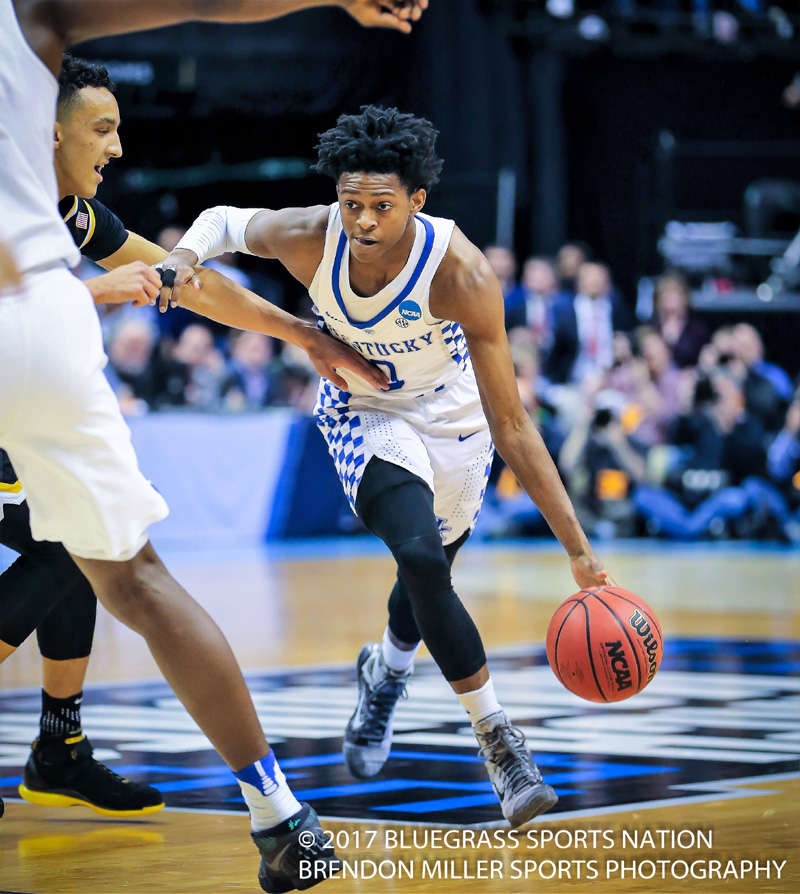 David Leveridge- Bluegrass Sports Nation Beat Writer
Indianapolis, Indiana
The quest for Championship number 9 continued today in Indianapolis, Indiana.  Kentucky took on the Wichita State Shockers.  Kentucky is the #2 seed in the South Region, Wichita is the #10 seed in the South Region.  Both teams advanced with wins in Fridays opening round games, Kentucky played in state school Northern Kentucky University, KY won this game by 9 points which 79-70 in a game that was closer than  anticipated. Wichita advanced with a win over the Dayton Flyers, Wichita won this game by 6 points, 64-58.

Today’s match up is a rematch of the 2014 NCAA tournament in which the Cats knocked off Wichita State from the tournament .  The Shockers were undefeated and a heavy favorite in the game, but Aaron Harrison started his magical run of knocking down three point baskets in the closing moments of Regulation and Kentucky won the game in 2014 by two points.  Kentucky 78- Wichita State 76.

Kentucky fans traveled well to the NCAA tournament in Indianapolis, making up an estimated 60 % of the total attendance.  Wichita also had a large following who attended the game, but the crowd was a majority of Kentucky Blue and Cardinal Red, as the Cards took the court for the first game playing Michigan. Although Kentucky had the largest fan base in Indianapolis, The majority of fans from Louisville , Wichita, and Michigan that stayed for the game were all rooting for the Shockers to pull off an upset.

Today’s game against the Shockers had the feel of a Final Four Match up. The arena was packed and the game was fun to watch.  Kentucky had a narrow two point lead at intermission. Kentucky 65- Wichita State 62.  The Second half was incredible as teams would trade baskets and the game stayed close with Kentucky only a 6 point maximum lead.  The game wasn’t decided until the closing moments as Wichita State had a chance at tying the game at the end of regulation.

Dominique Hawkins got the first basket for the Cats with 17:20 left in the first half Hawkins tied the game at 6 with 13 :25 left in the half.  Fox gave the Cats the lead of 8-6 early in the game.  Kentucky come out to a sluggish start, but Hawkins and Fox were able to score early giving the cats a 6 point lead with 9:18 left in the half,  Kentucky 14 Wichita State 8.  . The teams would trade baskets and Wichita’s McDuffie would hit a 3 with 8:02 left in the half cutting the lead to 1, 17-16.  The score remained the same until 4:45 left in the game.  Wichita State would take the lead on  a post move from Shaquille Morris.  Malik Monk was having another sub par game for the first 16 minutes of the half.  Monk was able to score 5 points in the last 4 minutes.  Monk connected on a 3 with 1:50 left in the half, he was later fouled on an over the top lob play, he goes to the line and makes two free throws.  Dominique Hawkins and Malik Monk each had 7 points leading the CATS in scoring.  Wichita State #24 Shaquille Morris lead The Shockers in scoring with 8 points.  Kentucky would go to half time with a 2 point lead Kentucky 26, Wichita 24, in a very low scoring game.

The second half began and Bam was able to score 2 point off the Monk missed shot.  Bam slammed the ball viciously with 2 hands giving the cats a 2 point lead with 19:08 left in the game.  The lead wouldn’t last long as the shockers Frankcamp hits a 3 point basket giving Wichita State a 3 point lead. Wichita 32-Kentucky 29.  Derek Willis would hit a 3 point basket before the first TV timeout, The cats trails by 1 point 37-36.  The cats started the second half looking the ball down low to Bam Adebayo, who had a size advantage and more agility than the Shockers.  Monk soon found Bam for an over the top lob and Kentucky would go up 3 points with 13:07 left in the game.  Kentucky fans were now getting into the game and Blue and White Chant was heard loudly in the arena.  The lead wouldn’t last long as Wichita would tie the game at 41 soon after.  A key moment in the game happened as Kentucky was leading by 1 point, the ball was worked around the key to Willis who hits a corner 3, extending the lead to 4 points with 8:04 left in the game.  Kentucky would find Bam for another over the top lob pass and Kentucky had some breathing room with a six point lead,52-46.  The Wildcat fans were again ecstatic The Shockers would again have an answer as Wichita would hit a 3 point basket with 5:41 remaining. Fox started finding his way in the second half, he repeatedly drove to the rim and got deep into the back court of the Shockers. Kentucky forced Wichita into a turn over and fox was able to get in transition, where he slammed the ball viciously with a 1 hand slam again bringing the fans to their feet.  Kentucky was now leading by 7 points.  Kentucky 58- Wichita 51.    Monk would score a 3 point basket again, with 2:07 remaining in the game giving the CATS a 5 point lead.  Wichita was able to counter with a three soon after.  Fox on the next play come out and broke down a defender and scored a 2 point basket on the drive to the rim.  Kentucky now had a little breathing room and was fouled early in the next possessions, as Wichita knew they would run out the clock.  Monk went to the line up 1 with 10.6 seconds and makes both free throws.  Kentucky was now leading by 3 points 65-62.  The cats were back on the defensive end pressuring the ball on the  in bounds play, ironically Malik Monk who isn’t known as a good defensive player blocked a last second shot by Wichita State and the time expires .  The Cats Won by 3 points Kentucky 65, Wichita State 62.

Kentucky will now  move on to the South Region Sweet 16 in Memphis Tennessee, where they will be in a bracket playing UCLA Bruins.  If Kentucky is fortunate enough to win against the Bruins, the Butler Bulldogs and the North Carolina Tar heels will be the next opponent. Kentucky has faced both UCLA and North Carolina early in the year.  Kentucky won the game earlier against North Carolina in an epic battle as Malik Monk hits a 3 at the last second  giving the cats a huge win.  Malik Monk had 47 points in that game and is still talked about as one of the best games this season .  UCLA came to Rupp  Arena in early December, UCLA defeated the Cats in another epic battle.  The Sweet 16 stage is set and 3 of the most historic teams in college basketball history will play for the rights on going to the final four in Phoenix, Arizona.