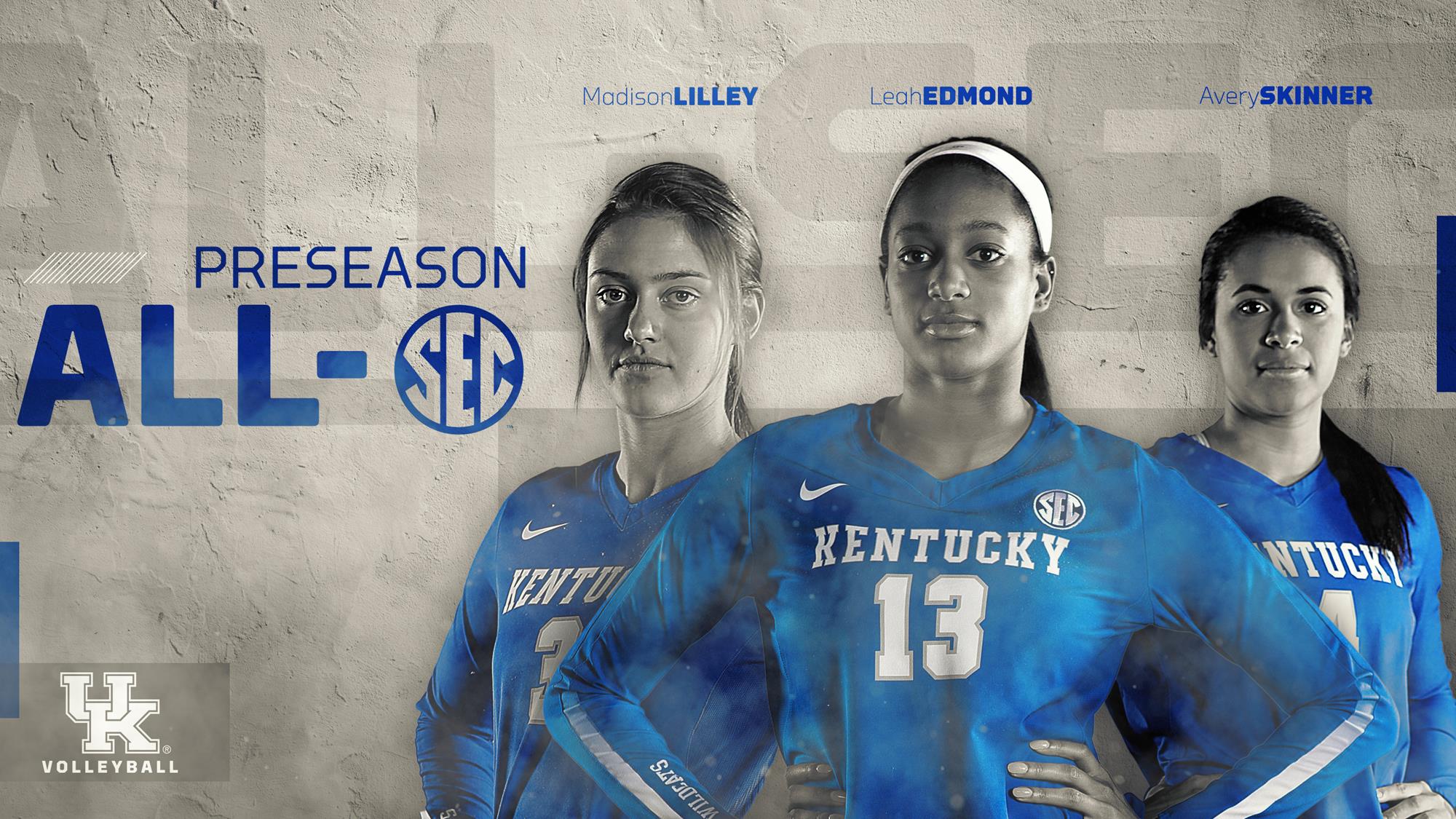 BIRMINGHAM, Ala. – After a season that saw the Kentucky volleyball team win a share of the Southeastern Conference title, the league’s coaches tabbed UK as the 2018 SEC preseason favorite. Junior Leah Edmond and sophomores Madison Lilley and Avery Skinner were picked to the preseason All-SEC team.

No school other than Kentucky placed multiple athletes on the preseason All-SEC team. Edmond makes her second appearance on the preseason list after garnering All-SEC honors in each of her first two seasons. Lilley, a first-team selection a season ago, and Skinner, an All-SEC Freshman Team pick last year, were selected for the first time in their careers. All 13 of the league’s head coaches vote in each poll.

Edmond is coming off a season in which she earned first team All-America and All-SEC honors. Edmond averaged 4.53 kills per set last year, good for No. 14 in the nation. Edmond’s 539 kills were the highest kill mark for a single season in the 25-point rally scoring era in program history. She totaled 10 or more kills in 28 matches in 2017, including four in the NCAA Tournament. She also hit the 20-kill plateau 11 times, and holds the 25-point rally scoring era record for most kills in a three-set match with 21 at Arkansas. Her 22 terminations against WKU in the second round of the NCAA Tournament are the most in the Skinner era for an NCAA Tournament match, and she had 20 or more three times in the tournament.

Last season Lilley was a second-team All-America selection and the SEC Freshman of the Year. Lilley averaged 12.14 assists per set in 2017, the third-best average in the nation and the highest for a freshman. Lilley is the only Wildcat in the 25-point rally scoring era with 65 or more assists in a match multiple times, and had 20 matches with 40 or more. Lilley was impressive in the 2017 NCAA Tournament, posting 63 helpers in the five-set win over BYU in the Sweet 16.

Skinner was a part of the SEC All-Freshman team last season. She produced the second-highest kill total on the team at 3.28 per frame in 2017. Skinner‘s recorded 18 matches last season with double-digit kills, including 11 in league play. The Katy, Texas, native has led the Cats six times in hammers and had a season-high of 19 terminations twice in 2017, coming against Northern Iowa and Alabama.

Kentucky will open the season on Aug. 24 at the Southern Cal Tournament. The Cats’ first match will be against Creighton at 1:30 p.m. ET and UK will take on USC at 10:30 p.m. ET that night. The Wildcats will take on WKU in an exhibition on Aug. 16 at 5 p.m.