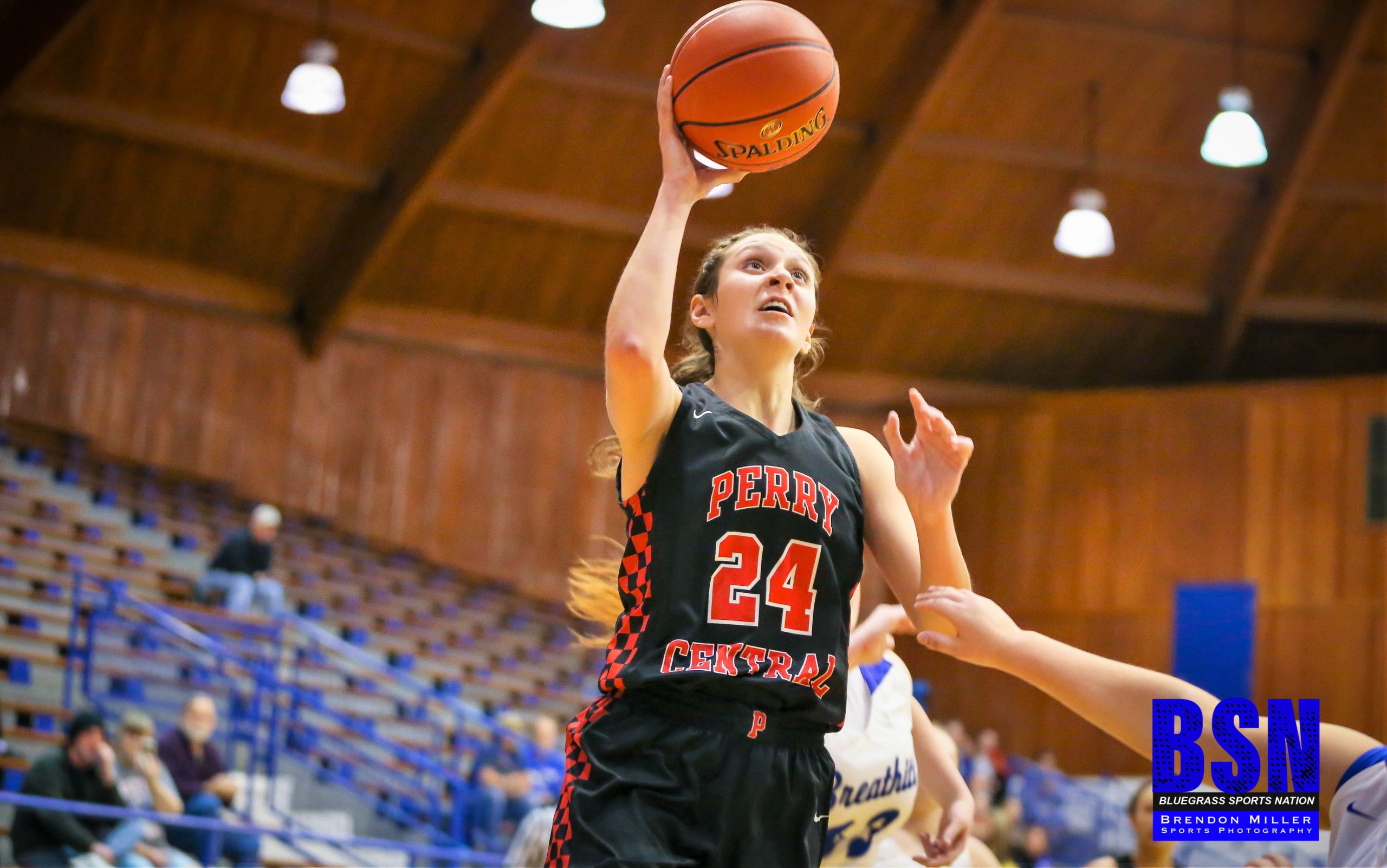 The Perry County Central Lady Commodores were struggling with only 2 wins on the season and 8 consecutive losses when they welcomed the 7-4 Harlan County Lady Black Bears who had already defeated 14th Region contenders Owsley County and Leslie County.  On paper, it looked like advantage Harlan County, but the home standing Lady Commodores had other ideas.  It turned out to be a signature 69-65 victory for Perry County Central and first-year Coach Misty MacAlarnis.

Harlan County’s Jaylin Smith started the scoring at the 7:22 mark when she scored and was fouled.  She missed the free throw and Courtney Hoskins was able to tie the game at 2 with a lay-up at the 6:14 mark in the first quarter. Harlan County was fouled on two offensive rebounds and made 3 of 4 free throws to give the Lady Black Bears a 5-2 lead with 4:53 to play in the first period.  A Chelsey Napier put back cut the lead to 1, but Jaylin Smith answered quickly to make the score 7-4 with 4:32 to go in the first.  A Perry Central free throw was answered with two baskets by Harlan County to make the score 11-5 and force Coach MacAlarnis to take a timeout with 3:18 to go in the period.  The timeout paid off and Perry outscored Harlan County 11-5 to finish the quarter to tie the game 16-16.  Jaylin Smith led the Lady Black Bears with 7 points in the first quarter.  Courtney Hoskins matched her with 7 points to lead Perry Central.

Perry Central started the second quarter where they left off by outscoring Harlan County 11-2 to open up a 27-18 lead with 4:11 left in the first half.  Four different Lady Commodores scored during the run.  Coach Debbie Green took a timeout at that point.  Harlan County came out of the timeout and made 4 free throws in two possessions to cut the led to 5 at 27-22 with 3:17 to go in the second quarter.  Three pointers by Courtney Hoskins and Emmalee Neace pushed the lead out to 33-22 and forced another Harlan County timeout with 2:24 left in the first half.  Coach Green showed her frustration and removed all five players from her line-up.  Perry Central could not take advantage and managed only one free throw the remainder of the half.  Fortunately for the Lady Commodores, Harlan County only mustered 2 free throws of their own.  Perry County Central took a double digit advantage into the locker room at 34-24. Courtney Hoskins led all scorers at the half with 15 points, including two 3-pointers and 5-6 from the free throw line.  Jaylin Smith led Harlan County with 9 points at halftime.  Harlan County only managed 1 field goal in the 2nd quarter.  Perry County Central was 7-13 (53.8%) and Harlan County was 9-12 (75.0%) from the line in the first half.

The teams traded baskets to open the second half, then a basket by Harlan County’s Kassydee Owens cut the lead to 36-28 and prompted a timeout by Coach McAlarnis with 5:52 to go in the third quarter.  Morgan Blakley came out after the timeout and made 1 of 2 free throws, but 4 quick points by Perry Central extended the lead back out to 11 points at 40-29 with 4:24 to go in the third quarter.  Kylie Noe knocked down a big 3 for Harlan County, but two free throws by Aliyah Fannin kept Perry in front by 10 points.  The next 10 points in the game would come from the free throw line.  Harlan County made 6 free throws in a 33 second span to cut the lead to 42-38 with 2:53 to go in the period.  Four of those were by Morgan Blakley.  Chelsey Napier was fouled on a put back attempt and made both free throws, but Blakley answered with 2 more free throws of her own.  A basket by Jaylin Smith cut the Perry lead to 2 at 44-42 with 2:15 to go in the third quarter.  The teams played fairly evenly over the next minute and a half with Perry holding a 49-46 lead with 0:57 to go in the period.  An offensive rebound and two free throws by Katie Dunnigan was followed by a steal and assist by Courtney Hoskins to Sydnee Minks gave Perry Central a 53-46 lead going into the 4th quarter.  Chelsey Napier had 6 points in the quarter including 4-5 from the free throw line.  Morgan Blakley kept Harlan County in the game going 7-8 from the free throw line and scoring 11 points.