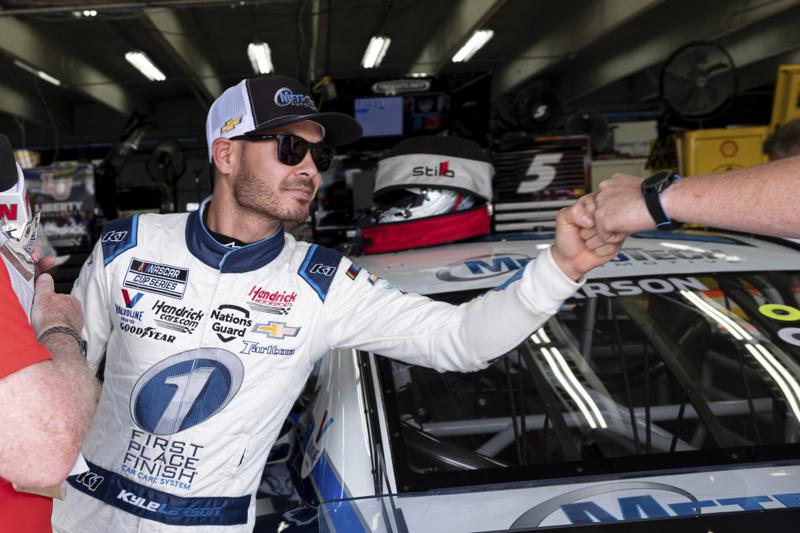 Kyle Larson drove to victory lane at Kansas Speedway in tribute to the 17th anniversary of a Hendrick plane crash.

The NASCAR Cup Series unloaded in Kansas City for round two of three in the Round of 8 NASCAR Playoffs schedule. Just one race remaining for competitors to qualify for NASCAR’s Championship finale after Sunday’s race Hollywood Casino 400 completion at the Jayhawk State.

The Hollywood Casino 400 at Kansas Speedway ended in what has become a familiar sight this season as Kyle Larson continued to dominate his way to victory.

Kyle Larson and Ryan Blaney occupy the front row and led the pack for 267 competitive laps on the 1.5 mile tri-oval located at the Village West vicinity of Kansas City, Kansas.

Dominating 130 of 267 circuits around the track, Kyle Larson crossing the checkers out front on a historical day which displaying a patronage tribute to 17th anniversary of the 2004 plane crash that killed 10 people including Rick Hendrick’s son Ricky.

Larson’s collected his fourth win in the playoffs, it is his third straight victory and the second time. Kyle Larson has won three consecutive NASCAR Cup Series races during the 2022 campaign, tying the late Dale Earnhardt Sr. as the only drivers to accomplish this goal in a single season.

Kyle Larson regained the lead for the final time off a restart with 39 circuits remaining.  Not an easy mission as Larson battled an aggressive Kevin Harvick to secure the point to the checkered stripe.

Chase Elliott advanced forward past a fading Kevin Harvick with 13 laps to go setting sites on his Hendrick Motorsport teammate.  A brush with the Turn 2 safer-barrier wall would end Chase Elliott’s chance to challenge Kyle Larson for the trophy, as Larson secures a 3.619 seconds margin of victory.

William Byron finished sixth and credited with the Stage 2 win.  After an unexpected caution with 50 to go, Byron dove into pit lane service for attention. Unfortunaley, Byron makes an unplanned extra pit stop to correct lug nut tightness and ends his chances of and prosperous finish.

Terrible day for Ryan Blaney who crashed out of the race with 44 laps to go compliments Austin Dillion chrome horn.  Ryan Blaney would finished 37th.

The Round of 8 continues next weekend at Martinsville Speedway, where the final three spots in the NASCAR Cup Championship finale will be decided.