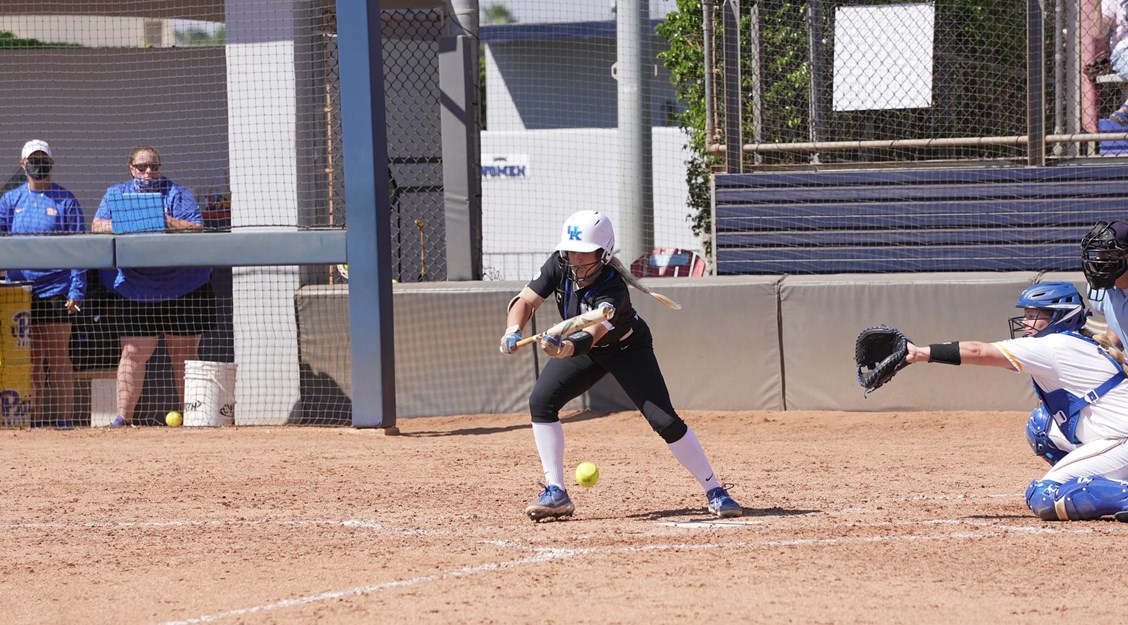 The No. 10 Kentucky Softball team continued its best start in program history on Thursday afternoon, picking up two wins on opening day of the 2021 Florida Atlantic University Parents’ Weekend Tournament.

To open the weekend, Kentucky defeated ACC representative Pittsburgh 8-1 before wrapping up the day with a 3-1 win over the Florida Atlantic Owls in UK’s most competitive game of the season to date.

Lauren Johnson was the star of the day for Kentucky, going 3-for-4 at the plate in game one against the Panthers, and following that up with another RBI and another single in UK’s second game of the day against FAU.

Freshman Erin Coffel continued her torrid start to the 2021 campaign, launching her ninth home run of the year in the top of the first inning against Pittsburgh, and adding in two more extra-base hits over the rest of the day.

Kentucky will play one game on Friday, against Illinois State at 10:30 a.m. ET. Live stats for the game can be found on UKathletics.com

3. Lauren Johnson went 3-for-4 in the game with three singles and an RBI.

Autumn Humes was the key player in the game, pitching five innings and picking up the win in the circle.

The key play was Erin Coffel’s two-run home run in the top of the first inning.

After a lead-off single by Kayla Kowalik, Erin Coffel made it 2-0 in the blink of an eye as she belted her ninth home run of the season. Mallory Peyton had an RBI double and an RBI groundout from Miranda Stoddard gave UK a nice pillow early in the game. UK 4, PIT 0

Rylea Smith scored in the top of the second on an RBI base hit up the middle by Lauren Johnson. UK 5, PIT 0

Kentucky played add-on in the top of the fourth, scoring on a Panther error and a sacrifice fly from Mallory Peyton, her second run driven in of the game. UK 7, PIT 0

Pittsburgh hit a solo home run in the bottom of the fifth for its only run. UK 7, PIT 1

Autumn Humes got the run back in the seventh inning on a solo home run of her own. FINAL – Kentucky 8, Pittsburgh 1

The key stat in the game was 1-3. The 1-3 batters in the Kentucky order collected all five hits in the game for the Wildcats.

Grace Baalman was the key player in the game, coming in the game in the bottom of the sixth inning with two runners on to pick up the save.

The key play in the game was Lauren Johnson’s RBI single up the middle to score Kayla Kowalik in the top of the first, as UK scored in the first inning for the 13th time in 16 games this season.

Kayla Kowalik led off the game with a single, and Johnson brought her home on a one-out RBI single. UK 1, FAU 0

In the top of the third, Kentucky made it 3-0 on an error by the Owls’ defense, scoring Erin Coffel and Lauren Johnson. UK 3, FAU 1

Kentucky was able to escape the Owls fifth inning, in which they had bases loaded and no outs, with only allowing a run, as Stoddard gave up just one hit, and then got three-successive outs, including a strikeout, to end the frame. FINAL – Kentucky 3, Florida Atlantic 1