Letcher Has Their Day in Rupp 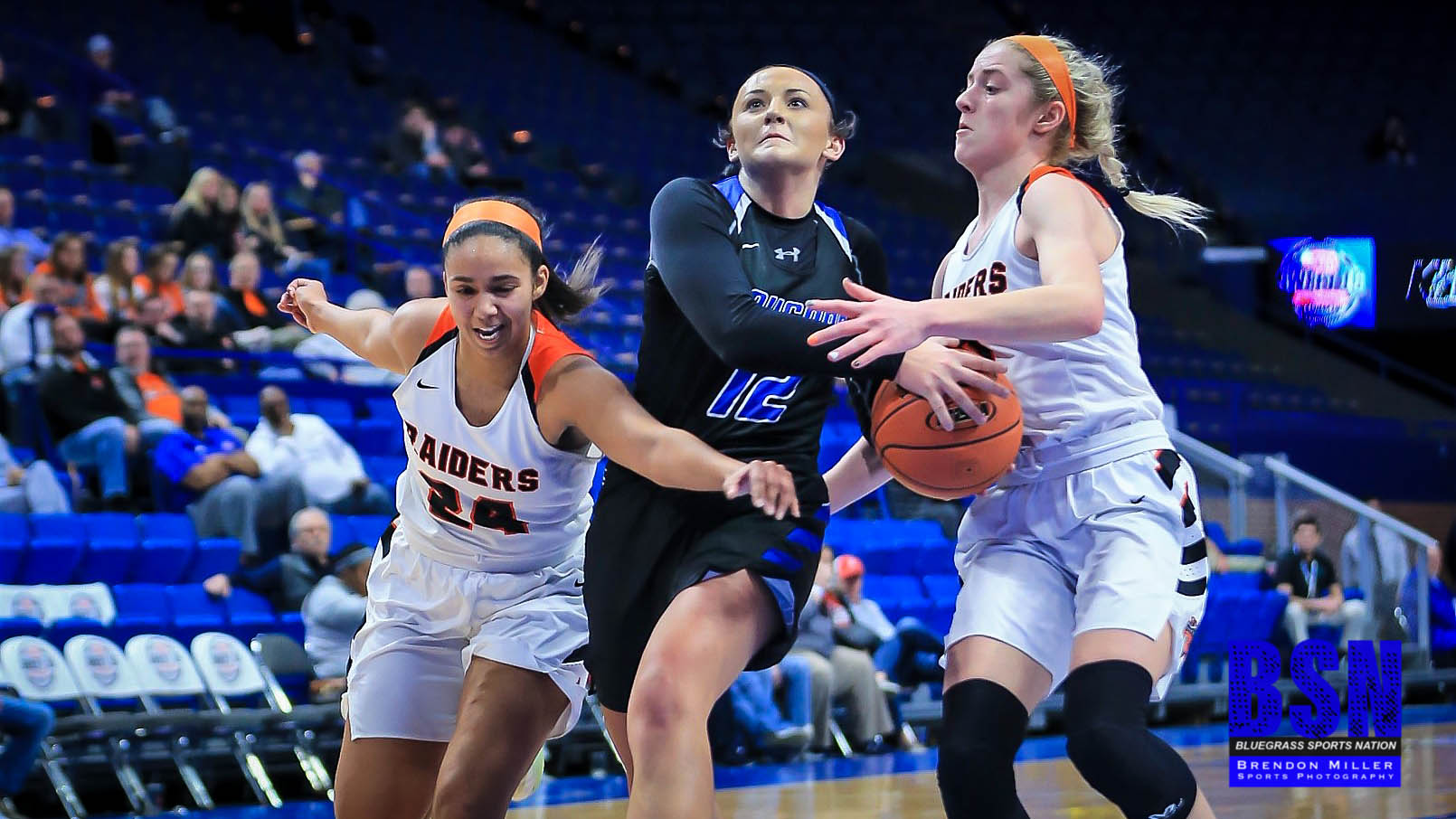 Before the 2020 Girls Sweet 16 was abruptly halted on Thursday, the 14th Region Champion Letcher Central Lady Cougars were able to have their day on the hallowed Cawood’s Court at Rupp Arena. Coach Keith Baker’s ladies rallied to take their first 14th Region crown on their home floor with a 45-40 win over three time defending champs, Knott Central last Saturday. This was Letcher’s first 14th Region Title since 2015, and the first time they would play at Rupp Arena.

Ryle took the tip and immediately jumped on top on a three pointer by Douthitt just six seconds into the game. Letcher tied the score on a three by Couch and then took their first lead on two Collins free throws. Ryle took the lead back at 6-5 on a three by Holtman. Letcher then went back on top for the rest of the Quarter on a basket by Banks and the Lady Cougars then went on a 7-0 run, all by 14th Region Tournament Most Valuable Player Banks, to take a 12-6 lead with 1:42 in the 1st Quarter. Holtman hit her second three, and Banks scored in the paint again to put the Lady Cougars up 14-9 at the first break.

Ryle made a concerted effort to take the ball in the lane after scoring all their 1st Quarter points on threes and opened the 2nd Quarter with the first six on baskets by Jaden Crist, Eubank, and Douthit, to take the lead at 15-14. Banks put the Lady Cougars back on top 16-15 with a steal and driving lay up and foul at 3:38. Banks nailed the free throw to extend the lead to two, 17-15. After a free throw by Ryle, Letcher would extend the lead to three at 19-16 on a layup by Bates at 2:27. From there Ryle would finish the Quarter and Half with a 9-1 run on baskets by Eubank, Sarah Baker, and Douthitt before Holtman beat the buzzer with a three. At the half, Ryle lead by five, 25-20.

Letcher asserted themselves on the boards in the half by out-rebounding the Lady Raiders 22-15 and 9-7 on the offensive boards resulting in 10 second chance points. Ball security was the undoing of Letcher in the half as the Lady Cougars turned the ball over 11 times and Ryle scored seven points off those turnovers. Letcher shot 45.5% in the 1st Quarter, but 15.4% in the second for 29.2% (7-24) for the half. Ryle shot 34.5%, but made four threes in the half and was 36.4% (4-11) from outside the arc. Banks had 13 in the half to the Lady Cougars.

Ryle opened the Third Quarter on a 13-2 run save two Banks free throws. Ryle continued to pound the paint and force turnovers. Letcher fought back with an 8-0 run on a Banks three at 2:47 and a Bates three at 1:38. Banks added a basket before Eubank scored with :13 to go to put the Lady Raiders ahead 40-30, headed to the 4th Quarter. Ryle scored 10 points in the paint and 11 off turnovers.

Collins scored the first basket of the 4th Quarter to cut the Ryle lead to eight, but Crittendon immediately answered with a three to make the score 43-32. Ryle then scored the next nine before a Banks free throw and five more before a Kaylee Banks (same name, #25) free throw, and three more unanswered by Ryle made the run 19-4.

The lasting moment of this game came when injured Lady Cougar Senior, MacKenzie Craft, entered the game with :38 seconds on the clock. Craft had injured her knee earlier in the season resulting in surgery and seemingly ending her career. Craft checked in with the Lady Cougars in possession and Craft’s teammates immediately set her up for a three from the right wing. Craft missed the first, but Ryle got the rebound and passed the ball back to Craft for another attempt. A successive miss, resulted in another Ryle rebound and pass back Craft. After a third miss from three, Ryle again rebounded and allowed MacKenzie to drive to the basket for a layup which she converted to end the game. Great sportswomanship by the Lady Raiders, allowing MacKenzie’s career to end in spectacular fashion, scoring in Rupp, and a touching moment that MacKenzie, and all of those in attendance, will remember forever!!!