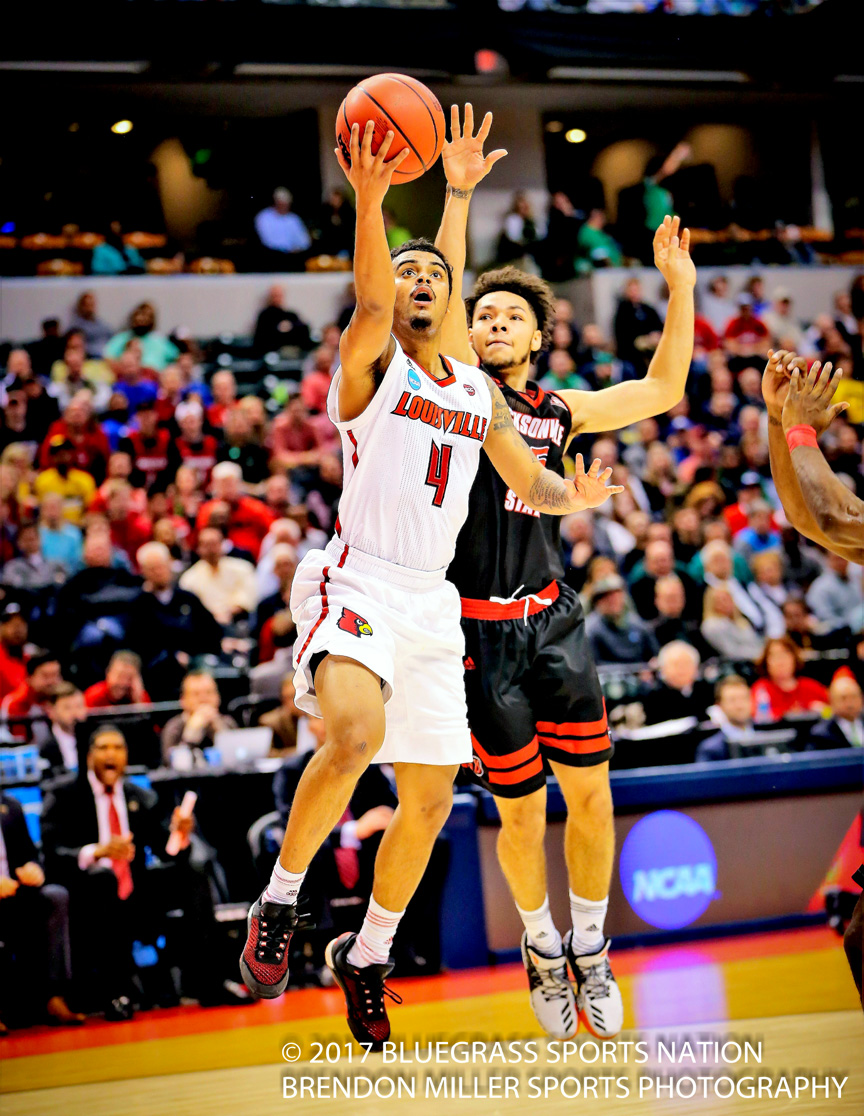 Louisville opens with a win – Photo by Brendon Miller

Things did not go well early for the No. 2 seed Louisville Cardinals as the No. 15 seed Jacksonville State Gamecocks stormed out to an 8 – 0 lead in the first three minutes of their Midwest Regional game.

Prone to scoring droughts this season, U of L missed 10 of its first 11 shots from the field.  Those missed shots included missed dunks by Jaylen Johnson and Anas Mahmoud, in which the rim blocked them.

The Cards went into the half leading 38 – 31.  U of L was only 13 – 36 for 36.1 percent in the first half, but Rick Pitino was pleased with the shot selection.  “I thought the shot selection was good in the first half because the first four paint touches were point blank range at the rim, and Jaylen and Mangok (Mathiang) just missed it on point blank range,” said Pitino.  “One was a missed dunk.  The other three that they normally make.”

Offense was no problem in the second half as the Cards shot 64.3 percent, however it was the defense that allowed them to get easy shots on offense.  “We did a good job of rotating in the back end and got a lot of deflections, and we forced them to shoot tough shoots,” said Deng Adel.  “We did a good job of controlling the backboard.  The Cards dominated the rebounding, holding a 36 – 23 edge.

Mathiang was one of four Louisville double figure scorers, leading the way with 18 points.  Mathiang was 8 – 13 from the floor and had two blocks and five rebounds.  Mangok was asked about his offensive efficiency in the last five games.  “Coach has made a big point of trying to go play inside-out,” Mathiang said.  “And it’s been working out pretty well for me.  A lot of guys are not expecting me to make a move in the post and going up and scoring.”

Johnson struggled for much of the game, but his backup, Ray Spalding played one of his best games of the season.  He scored 11 points and grabbed four rebounds in 26 minutes.  More importantly, he made all four of his field goal attempts and all three of his free throws.

Donovan Mitchell’s offense has been nowhere to be found as of late.  The Cardinals’ leading scorer did not make his first field goal until 6:02 was left in the game.  That being said, Pitino was happy with his play.  “I was very impressed with Donovan Mitchell,” said Pitino.  “I’ve been trying to get him to focus on other things other than scoring.  If it’s not your night because you’re the main target to do other things.  And tonight, he wasn’t necessarily on, but he had ten rebounds, five assists and three steals and a blocked shot.  So, to me, he’s come a long way.”

The Gamecocks were led by Norbetas Giga.  He finished with a career-high 30 points and grabbed nine rebounds.  He hasn’t been a big factor this season from 3-point range, but against the Cards he made all five of his attempts.

Next up for the Cardinals is a rematch of the 2013 Championship game against the Michigan Wolverines.  The No. 7 seed Wolverines defeated the Oklahoma State Cowboys 92 – 91 in the game of the tournament so far.  The hot shooting Wolverines hit 16 – 29 from 3-point range including an astounding 11 – 15 in the second half.