Louisville Squeezes Orange(men); Gets to 7 Wins! 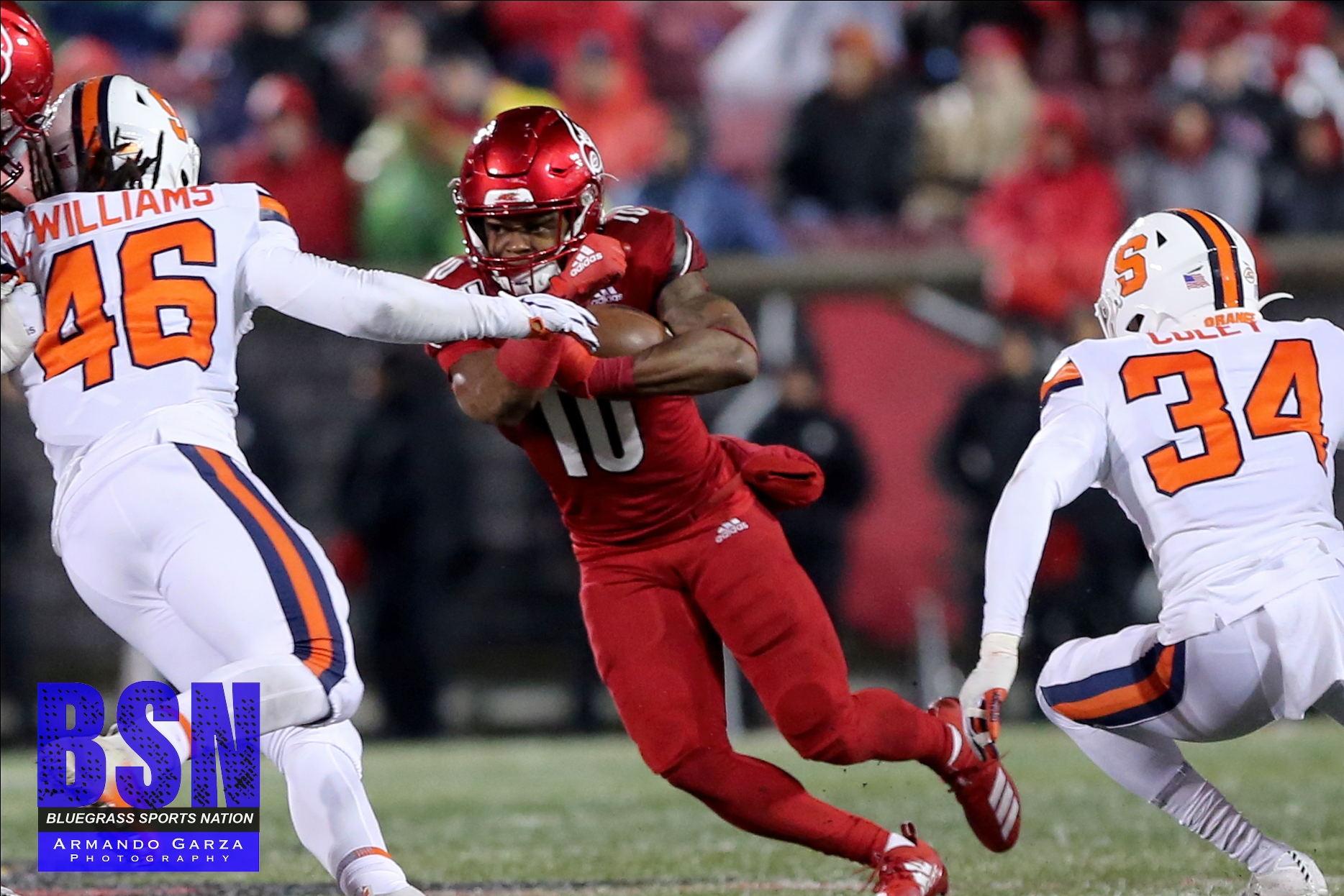 CARDS defeat Syracuse on Senior Day in the ‘Ville

Louisville, coming off an impressive victory a week ago on the road in the ACC at NC State, welcomed the Syracuse Orangemen to Louisville, Kentucky Saturday afternoon. The temperature was 41-degrees and it spit rain at the teams and fans most of the game. The conditions did little to dampen the atmosphere on Louisville’s “Senior Day.” It also failed to slow down the offenses, really, from either team.

Micale Cunningham appeared bent on sending the senior class out of Cardinal Stadium “the right way.” Cunningham opened the first quarter with a pair of TD passes, one to Ford the other to Hawkins to stake Louisville to a 14-3 lead before Syracuse could shake the water off their road uniforms. When Cunningham swept the left end for his 11th-career rushing TD to tie him for second most rushing TDs for a QB in school history, one had to wonder if the rout was already in progress.

Though Syracuse would make a game effort, and would move it well against the Louisville “bend but don’t break” defensive unit, the Orangemen just couldn’t hang with the type of thoroughbreds known to frequent places like Louisville, Kentucky. Louisville, behind 67 first-half yards on the ground from freshman, Javian Hawkins, and another 60-yards rushing and a TD from its QB, Micale Cunningham, to accentuate Cunningham’s 7-11 effort through the air, in the first half, for 181-yards passing with 3 TD passes, staked itself to a halftime lead of 28-10.

The first half would mark several noteworthy accomplishments for a team which would get to 7-4 with a date at UK next week. In a year where absolutely no-one picked them to do nearly as well as they have, TuTu Atwell went over 1,000-yards receiving when he hooked up with Cunningham for 90-yards and a score in the second quarter. Javian Hawkins would easily eclipse the freshman rushing mark in the first half for yards in an initial campaign. For the first time since 1999, the Cards have a thousand yard rusher and receiver in the same season.

The Cunningham to Atwell hook-up was the 4th longest scoring pass in Cardinal football history. Add that to the Cunningham threshold he mounted with his 11th rushing TD and there were plenty Cardinal career-styled accomplishments to celebrate on Saturday.

Syracuse came out of the half-time locker room with the football intent on doing something with it. The Orangemen drove the field before stalling. However the drive was sufficiently successful to give Andre Szmyt, from Syracuse, the opportunity to bang home a 46-yard field goal, in the rain, to shrink the lead to 28-13 in the 3rd. On the ensuing kick-off, Hall fielded the ball near the goal line and returned it 63-yards to the Syracuse 28.

Getting into the end zone from there would be no-sweat. Cunningham would throw TD pass number 4 to Jordan Davis (TE) and the resulting 7 for 3 swap, which broadened the margin to 35-13, appeared to hammer the nail in the Orangemen’s coffin.

The parties went back and forth the second half with Syracuse tightening the margin only to see the Cardinals come back and re-establish some “distance” between the two. On the night, the Cardinals were offensively unstoppable.

Cunningham would finish the game with 5 passing TDs, completing 11 of his 20 attempts, for 238-yards passing. Javian Hawkins would gain 223-yards on 23 carries to “put some more distance” between himself and the former freshman, inaugural season, Louisville rushing record. TuTu Atwell would toss in 152-receiving yards and a pair of TD receptions amongst his 5 catches, including the 90-yarder we above discussed.

In the end, a team about whom Coach Satterfield bemoaned didn’t “stretch defenses” enough earlier in the season, has improved, particularly in stretching opposing defenses. It has morphed behind Cunningham, Hawkins, and Atwell into the big-play juggernaut we saw burn Syracuse for 56-points, gain 608-total yards, and, most importantly, stretch the Syracuse defense to the point of breaking.

So the Cardinals pushed the inaugural campaign under Coach Satterfield to 7-4 on the year with a chance to get to 8-wins in Lexington next week. Whether they get to the 8-win plateau or not, the Cardinals are assured of getting some postseason action and, more importantly, the extra month of practices toward building its program for the years to come.

Reporting for the Bluegrass Sports Nation, this is your Louisville Cardinal’s corespondent Fletcher Long reminding Cardinal Nation to strike down the field and PLAY THROUGH THE WHISTLE!