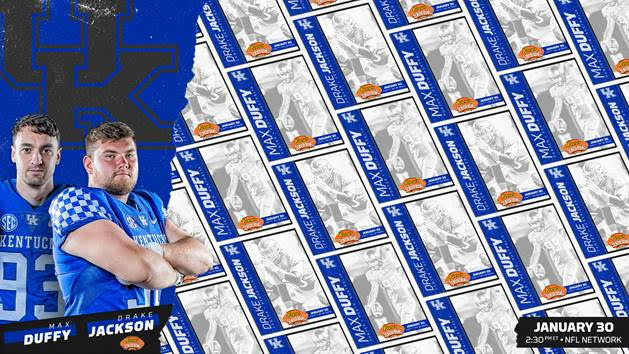 The seniors will compete for the American team

University of Kentucky senior punter Max Duffy and senior center Drake Jackson are set to play in the 72nd annual Reese’s Senior Bowl Saturday, Jan. 30 in Hancock Whitney Stadium on the campus of South Alabama in Mobile, Alabama. Kickoff is at 2:30 p.m. EST on the NFL Network. Both Wildcats will be on the American team.

Duffy, a native of Perth, Australia, finished his three-year career as Kentucky’s all-time leading punter, averaging 46.0 yards per punt. In 2020, he ranked fourth in the Southeastern Conference and 12th nationally with 45.1 yards per punt. Eleven of his punts went 50+ yards and he dropped 16 inside the opponent’s 20-yard line. His career-long 75-yard punt came in the season opener at Auburn, marking the third-longest punt in school history behind Paul Calhoun’s 80-yarder vs. Indiana in 1983 and Randy Jenkins’ 78-yarder vs. Tennessee in 1983. He earned second-team All-SEC honors from the Associated Press and Pro Football Focus, was a third-team All-SEC choice by Phil Steele College Football Magazine, and was named to three All-Bowl Teams (AP, ESPN and USA Today) for his impact in UK’s TaxSlayer Gator Bowl win over North Carolina State.

Off the field, Duffy graduated in December of 2019 with a degree in psychology and is on track to graduate in May of 2021 with a master’s degree in kinesiology and health promotion from UK.

Jackson, a native of Versailles, Kentucky, played in 46 career games with 43 consecutive starts at center. He graded at 85.7 percent in 11 games played in 2020, missing just one assignment in 701 snaps. He also had 40 knockdown blocks and tied for the team lead with 188 blocks at the point of attack. He was on the watch lists for both the Outland Trophy for the best interior lineman and the Rimington Trophy for the nation’s top center.

In his Wildcat career, Jackson helped UK win 37 games (most in a five-season span since 1949-53) and advance to five straight bowl games, tying the school record, with three wins (Citrus Bowl, Belk Bowl, Gator Bowl). He also helped UK win 20 SEC games, most in a five-year span in school history, notch victories over six ranked opponents, post its first 10-win season and winning SEC record since 1977 and first final ranking sine 1984 (2018 season), end the 31-game losing streak to Florida and win at Tennessee for the first time since 1984.

The Reese’s Senior Bowl invites the nation’s top senior collegiate football players and NFL draft prospects on teams representing the American (Panthers) and National (Dolphins) teams. The Carolina Panthers’ and Miami Dolphins’ coaching staffs will coach the teams. Only college seniors and fourth-year junior graduates are eligible for the game. Fourth-year junior graduates must have graduated by the December prior to the game to be eligible.