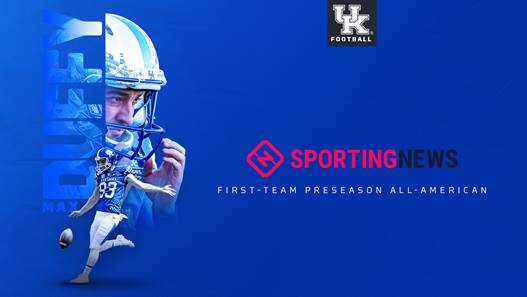 University of Kentucky senior punter Max Duffy can add another preseason accolade to his resume as Sporting News lists him as a first-team preseason All-American, it was announced Thursday.

Duffy, a native of Perth, Australia, was an absolute weapon for the Wildcats in 2019. Kentucky led the nation in net punting with a 44.55-yard net average and Duffy led the nation in punting at 48.10 yards per punt. He won the Ray Guy Award as the nation’s top punter and was named a first-team All-American by Walter Camp, the AP, Sporting News, ESPN, FWAA, AFCA Coaches’, The Athletic, USA Today, Phil Steele and Athlon Sports. He is UK’s career punt leader with a 46.3-yard average.

Sporting News is one of five outlets used to determine consensus All-America status, along with the Walter Camp Foundation, the Associated Press, the Football Writers Association of America and the American Football Coaches Association. Duffy was listed on Walter Camp’s 2020 preseason All-America team earlier this month.