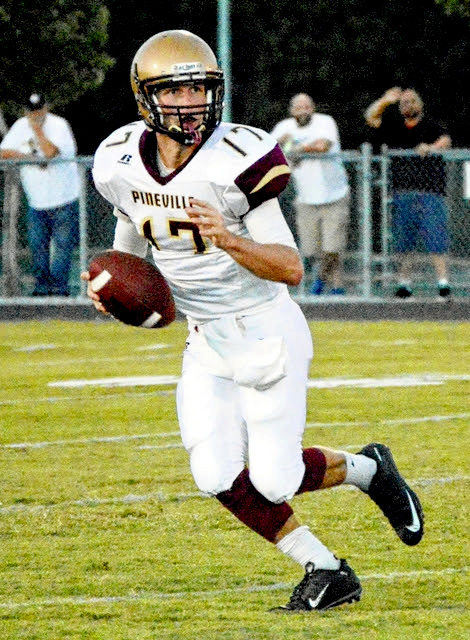 An eight-point lead heading into the second quarter wasn’t enough for Pineville on Friday. Led by running back Brandon Troxell, McCreary Central rebounded in the second half en route to a 59-36 victory.

The Mountain Lion defense had trouble stopping the Raiders’ junior back. Troxell rushed for 266 yards and three touchdowns on 27 carries. No other running back for McCreary Central had double digit carries.

Tucker Woolum moved the ball effectively through the air. He threw for 336 yards and three touchdowns on 23 completions. He also rushed for 58 yards and one touchdown on the ground.

Will Adams hauled in a game-high 10 receptions for 211 yards and one touchdown. He averaged 21.1 yards a catch. Nike Mason, Josh Lawson and Trent Lefevers also made an impact in the passing game.

Lawson finished the game with 54 yards on four receptions. Lefevers caught two passes for 34 yards and a touchdown, and Mason caught six passes for 30 yards.

Lawrence Simpson paced Pineville on the ground with 78 yards and a touchdown on nine carries. He also caught one pass for a 7-yard touchdown.

“Offensively, we played well. Defensively, we had our chances. We had third downs with a chance to get off the field, and they made big plays on us,” said Elam. “They just got the ball rolling in the second half.”

Pineville got on the scoreboard first with a 22-yard touchdown pass to Lefevers with 1:19 remaining in the quarter. Woolum converted the two-point attempt with a pass to Adams to give the Mountain Lions an 8-0 lead.

McCreary Central didn’t take long to answer. Hunter Jones completed a 17-yard pass to Hamilton for a touchdown with 10:08 remaining in the second quarter. The Troxell two-point attempt tied the game at 8-8.

The remainder of the second was silent until the Raiders scored on a one-yard touchdown plunge to go up 14-8 at the half.

McCreary Central extended that lead to two touchdowns early in the third quarter with a 70-yard touchdown run by Troxell with 11:42 remaining in the third. The two-point conversion increased the lead to 22-8.

“When we got down two scores and was playing catch-up, it was tough just because we had a tough time stopping them,” said Elam. “We’ve got to get better at stopping the run.”

A quick drive by Pineville ended with a 2-yard touchdown run by Woolum with 10:11 remaining in the third. Woolum converted the two-point attempt to cut the lead to 22-16.

The two teams exchanged scores throughout the remainder of the game with the Raiders walking away with a 23-point victory.