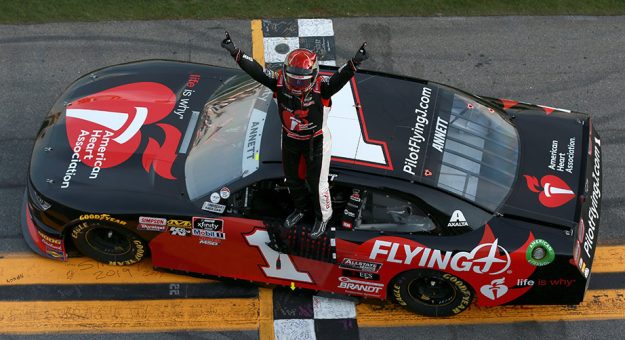 “This is amazing,” Annett said. “My first words were ‘Eight years,’ my eighth year in the series. My guys have stuck with me through the hard times, when everybody has counted us out and wondered why I get to drive this car. “We got the No. 1 into Gatorade Victory Lane. Our slogan this year is ‘One team, one dream, one goal.’ This was one of them, so we’re starting off good.”

Saturday’s race started with a bit of a Daytona throwback feel – an Earnhardt started on the front row and led the first 29 laps. That would be Jeffrey Earnhardt – grandson of Dale Earnhardt. Earnhardt qualified second in the No. 18 iK9 Toyota several hours before the race. He got to lead the field to the green flag when polesitter Tyler Reddick was penalized for having to change a tire during qualifying. Reddick started from the rear of the field. Earnhardt was victimized on Lap 30, the last lap of the race’s first stage, by a classic slingshot move by Justin Haley (No. 11 LeafFilter Gutter Protection Chevrolet). Haley got by Earnhardt – as did three others – to win the stage. The race was divided into three stages of 30, 30 and 60 laps. (Stage winners earn points toward the season-long series championship battle.) The second stage was won by Ross Chastain (No. 10 Nutrien Ag Solutions Chevrolet).

The fifth and final practice session for the DAYTONA 500 was also held Saturday with 20 cars in the 40-car field participating, as some teams chose to sit out, satisfied with their set-ups for race day. Michael McDowell (No. 34 Love’s Travel Stops Ford) posted the session’s fastest lap of 191.440 mph. DAYTONA 500 polesitter William Byron (No. 24 Axalta Chevrolet) ran four laps, posting the session’s third-best speed of 191.339. The top speed of the five sessions was 200.758 mph by Paul Menard (No. 21 Motorcraft/Quick Lane Tire & Auto Center) during the fourth session on Friday. The starting lineup for the DAYTONA 500 – the season-opener for the Monster Energy NASCAR Cup Series – was finalized on Thursday night after the Gander RV Duel, two 150-mile/60-lap races that determined starting positions 3-40 for the DAYTONA 500. The front row was “locked in” on Feb. 10 with DAYTONA 500 Qualifying Presented By Kroger, as Byron and Alex Bowman qualified 1-2. That led a top-four sweep by Hendrick Motorsports and Chevrolet.