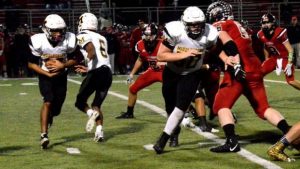 Middlesboro came close to shaking up the 2A playoffs on Friday when they traveled Prestonsburg. The Yellow Jackets fought hard in the first half taking a one-point lead heading into halftime.

Middlesboro’s momentum quickly faded in the second half as the Blackcats rattled off 22 unanswered points en route to a 35-14 victory over the Jackets. The loss eliminates Middlesboro from the playoffs, while Prestonsburg hosts Lexington Christian on Friday.

“We came out, and we played a really good first half. Second half we came out in the first two series on offense (and) shot ourselves in the foot with holds and offsides,” said Middlesboro coach Zach Massengill. “Second-and-25, it’s hard to have good play calls especially when you’re not a great passing team. It just kind of put us behind the eight ball. We couldn’t finish in the second half. We’ve got to get better and overcome that obstacle.

“We laid it on the line tonight. I thought the kids played really hard. Prestonsburg knew they were in a battle. As a four seed, I think we came up here and we got our money’s worth.”

It was the combination of Ethan Varney and Ryne Slone that boosted the Blackcats to victory. Varney finished with a game-high 169 yards and three touchdowns on 25 carries. Slone rushed for 97 yards and a touchdown on 14 carries.

Drake Nunnery was effective behind center throwing for 34 yards on two completions. He also ran for 68 yards and a touchdown on nine carries.

Quarterback Anthony Jackson led Middlesboro on offense with 98 yards and one touchdown on 15 carries. He also completed two passes for 43 yards. One pass went for 30 yards to Corey Hariston, and the second went for 13 yards to Owen McWilliams.

Hariston ended the game with 64 yards and a touchdown on two carries. McWilliams finished with 29 yards on 13 carries. Michael Carroll ran for 15 yards on three carries before exiting the game with an injury.

“It’s a shame. We were really excited at the beginning of the year. We felt like we kind of had all of our horses,” said Massengill. “We just lost kids all throughout the year. We had kids step up and keep us competitive.

“This week and somewhat last week, we were close to full strength minus the two season-ending injuries. Then tonight two of our guys come up with injuries in the first half. We just never really got healthy this year, and that’s an opportunity for some other guys to play. It’s a good learning opportunity that everybody is a play away from having to be the man.”

Prestonsburg took their opening drive of the game 72 yards in 14 plays. Slone capped the drive with a 5-yard touchdown run to give the Blackcats a 7-0 lead with 7:09 remaining in the first.

Middlesboro’s opening drive ended uneventful after a chop block put them in a second-and-long situation. The Jackets were forced to punt two plays later.

The Middlesboro defense stepped up on the ensuing drive with Prestonsburg nearing the red zone. The Jackets held the Blackcats on fourth-and-2 on the Middlesboro 34.

The Jackets took advantage of the defensive stand and drove 66 yards in 10 plays. It was a 34-yard run by Jackson that drove Middlesboro down to the Blackcat 15. After recovering a fumbled snap, McWilliams ran 12 yards in two plays to move the ball to the Prestonsburg 5.

Jackson capped the drive with a 5-yard touchdown run with 10 minutes to go in the second quarter. The Brandon Helton extra point tied the game at 7-7.

The Middlesboro defense came up with another big fourth down stop after Prestonsburg drove inside their 29-yard line. Two plays into the Jackets’ drive, Hariston broke free on a reverse for a 69-yard touchdown run with 5:20 remaining in the half. The Helton kick gave the Jackets a 14-7 lead.

The Blackcats answered on their next drive capping an eight-play, 60-yard drive with a Varney touchdown with 1:53 remaining in the half. The missed extra point gave Middlesboro a 14-13 lead heading into halftime.

The momentum looked to be in Middlesboro’s favor after the Jackets recovered an onside kick to open the third quarter. The offense couldn’t do anything with it after a holding penalty put them in first-and-22. They were forced to punt the ball away three plays later.

Prestonsburg found pay dirt with 3:46 remaining in the third. After taking over at the Jacket 26, the Blackcats capped off a six-play drive with a Varney 2-yard run to give them a 19-14 lead.

Prestonsburg sealed the victory in the fourth after scoring twice in the final quarter. The first came on the opening drive of the fourth when Varney capped a seven-play drive with a 1-yard touchdown plunge to increase the lead to 27-14 with 10:46 remaining in the game.

The second touchdown came with 6:34 remaining in regulation. Nunnery found space and took the ball 35-yards for a touchdown to secure the 21-point victory.