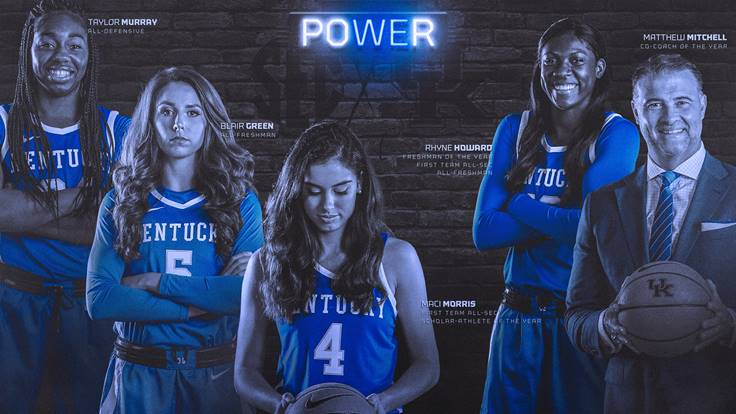 LEXINGTON, Ky. – It’s been a remarkable season so far for the No. 13 Kentucky Wildcats and the team’s success is getting recognized at a high level as Matthew Mitchell, Rhyne Howard, Maci Morris, Taylor Murray and Blair Green have all earned All-Southeastern Conference honors as voted on by league coaches.

Mitchell, who has led Kentucky (24-6, 11-5 SEC) to a top-four finish in conference play, has been named SEC Co-Coach of the Year, while Howard was tabbed the SEC Freshman of the Year and Morris earned SEC Scholar-Athlete of the Year. Howard and Morris were also named to the All-SEC First Team while Murray was on the SEC All-Defensive Team and Howard and Green was tabbed SEC All-Freshman performers.

This is the second SEC Coach of the Year honor for Mitchell, who also won the award voted by league coaches in 2010. Mitchell is now just the eighth coach in league history to win multiple coach of the year awards by league coaches. This is only the second time since the award began in 1984 that two coaches have shared the honor with the other being 2015.

Mitchell has led Kentucky to a 20-win season for the ninth time in his tenure after UK had just 10 20-win seasons in 33 years of basketball before he was hired. The 12th-year head coach has led Kentucky to a top-four finish in the SEC for the 10th time in his tenure after the Wildcats went 15-17 last season and were picked by league media to finish seventh this season. Mitchell won his 300th career game earlier this season and has 280 wins at Kentucky.

Howard has had one of the best rookie seasons in program history, leading the team with 16.0 points and 6.7 rebounds per game while sitting tied for the team lead with 68 3s made. The rookie ranks second on the team with 65 steals and 70 assists while her 21 blocks ranks third. Howard won eight SEC Freshman of the Week honors this season, which broke the league record for most honors in a year.

The native of Cleveland, Tenn., is currently fourth among freshman nationally and first in the league in points per game while she is the only freshman in the nation with 460+ points, 60+ 3s made, 60+ steals and 70+ assists. Howard ranks top-five in program history for freshman in points, points per game, rebounds, rebounds per game, field-goals made, 3s, 3PFG percent, steals, double-figure scoring games and double-figure rebounding games.

Morris has been fantastic for the Wildcats this season averaging 15.1 points per game with 68 3s and a team-best 44.7 percent from long range. The guard has scored in double figures in 24 games, including eight games of 20 or more. Morris’ best game came at Tennessee where she played 31 minutes before fouling out and scored 27 points with four 3s, three rebounds and three steals.

The native of Bell County, Ky., has left her mark on the UK program as one of the best to ever play for the Wildcats. Morris ranks sixth all-time in scoring with 1,647 points while her 245 career 3s made ranks second. The guard has connected on 40.9 percent of her 3-point attempts during her career, which ranks first in program history. In all, Morris has hit at least one 3 in 105 of 126 career games.

Murray has saved her best season at UK for last averaging 12.4 points per game while leading the team with 111 assists and 92 steals. In just 19 games played this season, Murray already had more steals than she had in 32 games played last season (67). A semifinalist for Naismith Defensive Player of the Year, Murray ranks fifth all-time at UK with 275 career steals while she is just four assists away from ranking top five in program history.  Murray is on pace to become only the fourth player in program history to lead UK in steals all four years of her career.

The native of Odenton, Md., has had some great performances this season including a game-high 21 points with four rebounds, four steals and two assists vs. Missouri. Murray scored 19 points in the second half alone vs. the Tigers with all of her steals coming in the final 20 minutes. Murray nearly had a triple double against North Carolina, scoring 23 points with 10 assists, seven steals and six rebounds. Against Auburn, she recorded six steals with 17 points going 7-of-12 from the field.

The native of Harlan County, Ky., was a perfect 5-of-5 from the field and 2-of-2 from long range at Auburn scoring 12 points with three rebounds, a block and an assist. Green played a season-high 33 minutes against Florida scoring eight points with five rebounds and two steals playing at the top of UK’s press while she scored 13 points in the season opener, which was tied for the seventh most points by a UK player in their varsity debut in program history.