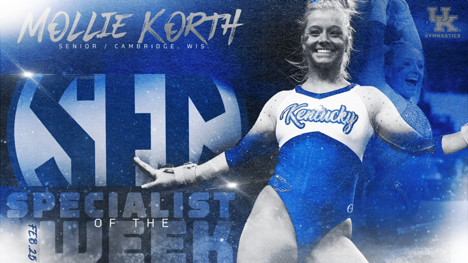 LEXINGTON, Ky. – After recording the best score across any event of her storied career in last Friday’s 197.050-196.825 loss to then-No. 11 Georgia, No. 12 Kentucky senior Mollie Korth was named the Southeastern Conference Specialist of the Week on Tuesday.

With an SEC Gymnast of the Week designation on Jan. 7 and four SEC Freshman of the Week honors in 2017, Korth becomes the first athlete in program history to earn each of the conference’s weekly awards over the span of a single career since the SEC Specialist of the Week was first bestowed in 2013.

The eight-time All-American received her latest accolade for a 9.975 vault routine in an outright victory on the event last week, marking the 22nd of her career. The score ties the second-best on vault in school history.

Korth also picked up her 11th floor victory in a tie with teammate Ella Warren for a season-high-matching 9.925 versus the Bulldogs. The native of Cambridge, Wisconsin, finished alongside sophomore Cally Nixon in a tie for second place on bars with a 9.900.

Korth becomes Kentucky’s first SEC Specialist of the Week since 2019 graduate Katie Stuart accomplished the feat with an identical score on the same apparatus last March.