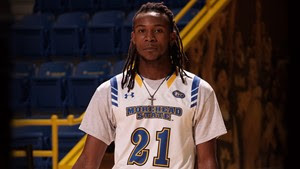 Thompson will be a junior during the 2017-18 school year.

“Trell is a player that comes in here and gives us some maturity, and he gives us some depth at the wing spot. He’s an athletic, physical guard, and he’s a guy that plays with a real chip on his shoulder,” said head coach Preston Spradlin. “He has great balance in his game, he can put it on the deck, he can slash, and he can really shoot the ball. He also gives us that elite defender and rebounder at the wing position.”

Thompson, a native of McComb, Miss., was second on the team in 2016-17 with 11.2 points and 5.1 rebounds per contest, despite missing the first half of the season due to an injury, and hit 71 percent of his free throws. He had a season-high 21 points in a win over Pearl River.

He was named Second Team All-State following the season.

Thompson played at McComb High School and led the Tigers with 17.3 points and 5.2 rebounds per game as a senior. He scored in double figures 27 times as a senior and had 20-plus points ten times. He helped lead the team to back-to-back state titles during his junior and senior seasons.

“He’s a real winner. He’s won three state championships dating back to his junior year of high school. He comes from great programs, he comes from a great family, and coming from the south, he’s someone that is going to enjoy being here and he’s going to embrace our fan base,” added Spradlin.