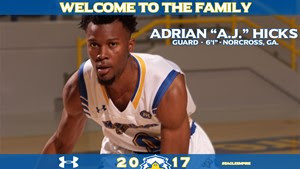 MOREHEAD, Ky. – Adrian “A.J.” Hicks, a 6-foot-1 guard from Columbia State Community College has signed a National Letter of Intent with the Morehead State men’s basketball program.
Hicks will be a junior during the 2017-18 school year.

“We sold A.J. on the fact that the OVC (Ohio Valley Conference) is a great guards league and we have to have great guard play to be competitive in this league, and he’s a guy that really fits that mold,” said head coach Preston Spradlin. “He’s a scoring point guard and he has a great pace about him. He has a good temperament on the floor, he’s a very good passer, he can knock down shots, and he can get to the rim through contact. He’s going to be a player that can really carry the load for us at the point guard position.”

Hicks, a native of Norcross, Ga., scored a team-high 19.5 points per game, while averaging 6.0 rebounds, 5.7 assists, and 3.1 steals as a sophomore at Columbia State. He eclipsed 20-plus points in 13 of 27 games, while scoring 30-plus points three times. He finished the season with 84 steals, which ranked 12th in the NJCAA.

In 2015-16, he averaged 17.8 points, 4.5 rebounds, 3.6 assists, and 3.0 steals, while scoring in double digits in 24 games. He scored 20-plus points eight times, including a season-high 36 points, while knocking down eight three-pointers, against Walters State.

At the conclusion of his sophomore season at Columbia State, he was named Tennessee Community College Athletic Association Player of the Year. He was also named TCCAA Freshman of the Year following his rookie campaign.

As a senior at Meadowcreek High School, he scored 20.0 points per game, while also averaging 6.0 rebounds and 5.0 assists.

“We expect him to come in right away and compete for a starting role,” added Spradlin.