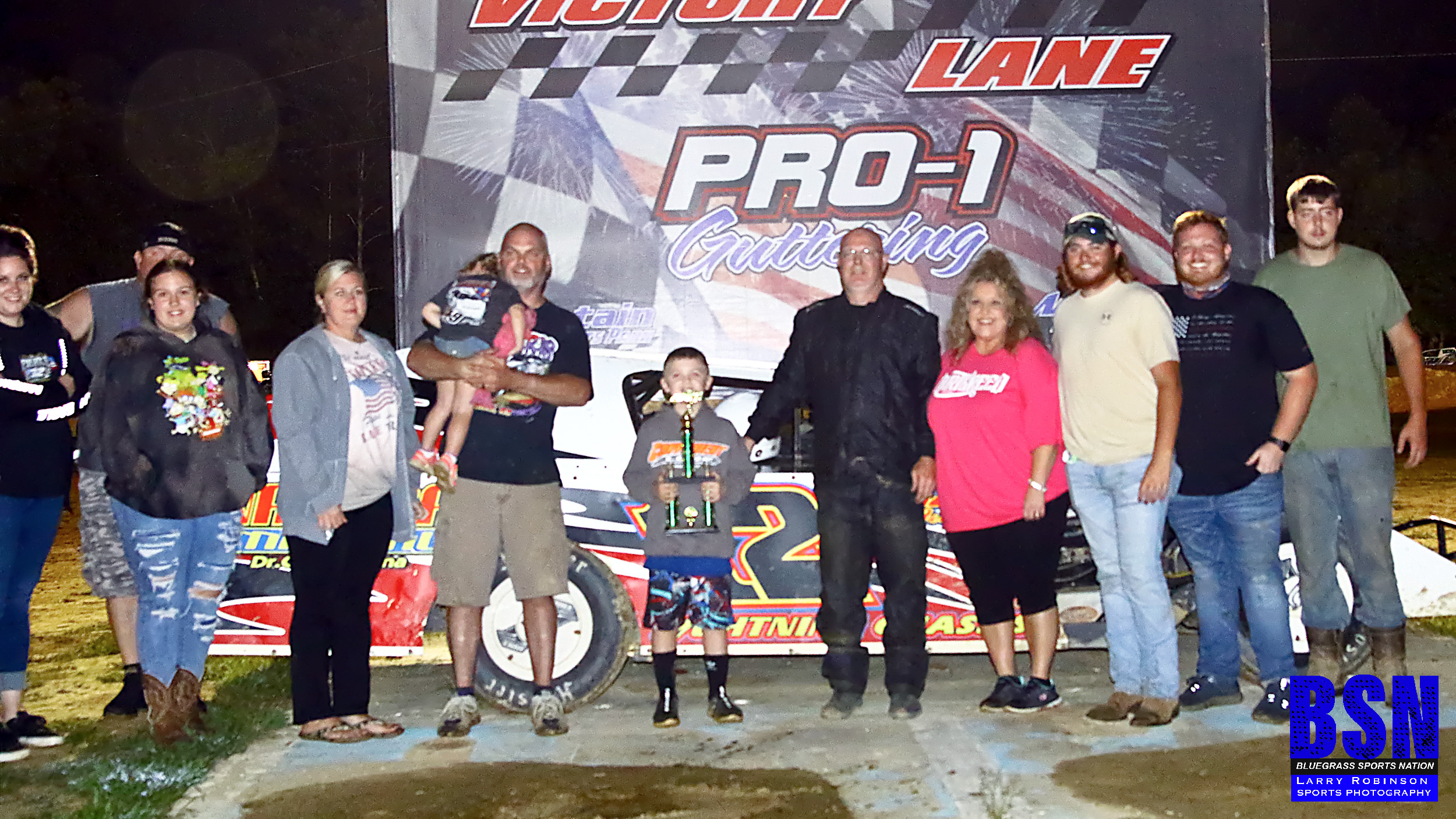 In another exciting night of racing, Jamie Maggard captured the Open Wheel Modified $1000-to-win race Friday Night. Maggard set fast time with a 16.61 and lead every lap of the 25 lap Modified race. The Viper native started the season in the Limited Lates and recorded three feature wins in that class before switching classes.

The current Points leader and winner of the previous two Open Wheel races, Andy Mason, finished second in a strong showing in his #45 car. Hindman’s Brandon Coleman had a strong showing as he finished third. Bobby Williams got fourth in his first appearance of the year in his #10 at MMP. Hunter Feltner continued to impress fans as he lead laps in the 25 lap contest before finishing fifth and #26 Jared Robison had his best run of the season as he finished sixth..

Once the 604 American Crate Series put on a show for the fans at MMP. Oscar McCowan picked up his 75th career feature win and his first 604 ACAS Late Model feature win aboard his #1 Late Model.

Jody Adkins continues to be one of the fastest cars of the summer as he once again ran up top for the entire feature race in route to a second place finish. Shannon Thornsberry battled mechanical troubles early got faster as the night went on and finished third. Going into the night #10 Raymond Nichols had not been beaten in a regular season Crate Late Model race and set fast time Friday night with a 15.70. With the fourth place finish, Nichols still leads the Hometown Sports Corner Points by 90 points with three races to go in the regular season. #46 Steve Martin finished fifth, as he was followed by Hall of Famer Jackie Fields in his #77 car, 44 Ryan Shepherd, and #24 Brandon Urban.

Jacob Hall Parks the Cornbread Express in the Pro1 Victory Lane Again in the Sport Mods as #2 Dakota Adams had an impressive top 5 with his second place finish. #11 Shane Yates was third, #10 Maddox Smith, and 10c Christian Crider rounded out the top 5. #72 Daniel Webb set fast time but had mechanical troubles and finished sixth, while 03 Tony Sizemore was seventh.

A week after Racin’ Tim Mason had his six consecutive win streak brought to an end, the veteran driver returned to the winner’s circle in the #45 bomber. #3 Marcus Griffith challenged Mason a couple different times in the feature but was unable to get around Racin’ Mason. Griffith had mechanical trouble and didnt have a finish that would indicate how strong he did run. Another Griffith, Tyler was also strong all night and finished second. #28 Sammy Deaton finished third, while #23 Danny Fields and #3 Marcus Griffith finish fourth and fifth. #11 Jamie Whitt, #8 Cody Bentley, and #1 Dakota Shepherd round out the top 8 in bombers.

For the third weekend in a row, #62 Daniel Stamper from Hazard won the KDRA Super Stocks. Stamper’s win gave him 5 wins in the last three weeks and he undoubtley is a favored driver as he has tons of momentum going into next weekend’s Big $1200 to win KDRA at MMP. Pikeville’s Bryson Patton also has his sights set on next weekend’s big race as he finished second Friday night. #11 Brandon Banks and #16 Zach Howell finished third and fourth.

The Limited Late Model class has a new points leader as #9 Corey Brock captured his first win of the season. In the winner’s circle Brock thanked his fans and supporters and states he hopes the class continues to grow throughout the season. Knott County’s Darren Slone has teamed up with Hall of Famer Jackie Fields and ran his first Late Model race of his young career. Slone who has prior wins in the Open wheel and Sport Mods is looking to become part of the select few who have won in three different classes. Slone just missed that goal Friday night as he finished second.