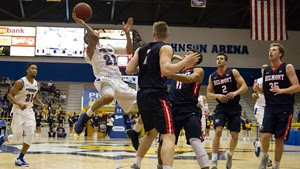 Down four with 22 seconds to go, Morehead State guard Xavier Moon grabbed a crucial rebound off the front end of a one-and-one at the defensive end. Miguel Dicent received the outlet pass, but came up short on a tightly contested jumper after 10 seconds of steadfast defense from the Bruins.

“Offensively, we did some really good things,” said head coach Preston Spradlin. “We only had nine turnovers – five in the second half, which were costly – but I wasn’t worried about offense. My concerns were on defense. Can we scheme, can we make adjustments as they make adjustments? We weren’t as solid at those as we planned. A good Belmont team is going to take advantage of that.”

“It’s good to see five guys in double figures, it’s good to see Miguel back in the flow offensively,” Spradlin said. “(Marrero) was terrific, and Xavier didn’t have a great shooting night, but he was aggressive and he did what he needed to do. Ronnye was excellent being aggressive and driving the ball, and it was also nice to get Lamontray going offensively.”

Morehead State returns to action on Saturday, when Tennessee State (12-5, 3-1 OVC) visits Johnson Arena at 7:45 p.m. ET.  The matchup will be the second half of a men’s and women’s doubleheader for the Eagles.