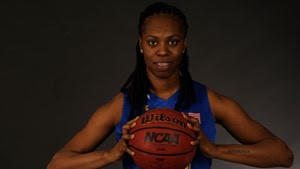 MOREHEAD, Ky. – Morehead State women’s basketball has added to its incoming class of 2017, inking junior college transfer Tierra McGowan to a National Letter of Intent.
“We are thrilled to have Tierra join our family,” said Eagles head coach Greg Todd. “She will bring a competitive nature every day that our fans will be excited to watch.”

“(McGowan) will be a great addition to our frontcourt with her tremendous rebounding ability and her athletic ability to run the floor,” Todd said. “Tierra is a national champion and understands how to play and compete at a high level.”

McGowan averaged 20.7 points and 14.1 rebounds per contest last season. She ended her 2016-17 campaign with 28 straight double-digit scoring outputs, while amassing over 20 boards in six different outings.

McGowan’s 20-point, 20-rebound performance earned her Most Valuable Player honors in the Golden Eagles’ 57-49 overtime victory over reigning champion Roxbury (Mass.) in the national title game. Rock Valley finished the season with an overall record of 33-2.

The Chicago native led the nation in made field goals (325), while ranking second in total rebounds (494) and blocked shots (85), third in total points (725), and eighth in field-goal percentage (.579). McGowan will be immediately eligible to complete her final two seasons of college basketball with the Eagles.