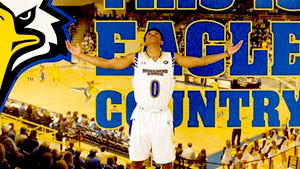 Feagin will be a freshman during the 2017-18 school year.

“We had a need to get another point guard and we wanted to get a high school player that could come in and contribute right away, but also be able to learn the ropes. Richard certainly adds value on and off the floor. He’s a high character guy and certainly a good player coming from the DME Academy where he did a post-grad year and got stronger,” said head coach Preston Spradlin.

Feagin averaged 18.3 points, 5.4 rebounds, 5.3 assists, and 2.1 steals in his lone season at DME Academy. He knocked down 51 three-pointers, while shooting 35 percent from beyond the arc. He scored in double figures in 21 of 23 games, including six 20-plus point games and three 30-plus point games.

In mid-December, he scored 32 and 33 points in back-to-back games, and had a triple-double with 23 points, 12 rebounds, and 11 assists against Conrad Academy on Jan. 13. He knocked down seven three-pointers and scored 30 points at Faith Baptist Christian Academy on Nov. 26.

At Southfield Christian High School in Southfield, Mich., he was named Athlete of the Year and he was named all-conference following his senior season.

“I expect him to come in and be able to help us at the point guard position right away,” added Spradlin.