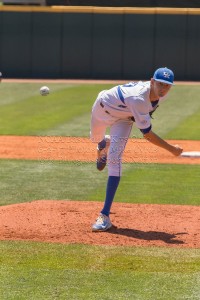 LEXINGTON, Ky. – Kentucky’s high-powered offense pushed across a pair of runs in the first inning and kept relentless pressure on Ohio throughout the game, defeating the Bobcats 6-4 in the opener of the Lexington Regional in the NCAA Tournament.

The Wildcats (40-20) won the opener of the tournament for just the second time in program history, joining the 1988 club in advancing to the winner’s bracket after the first game. UK will face the winner of Indiana and N.C. State, which plays Friday evening.

“I’ve been fortunate enough to play in the postseason a bunch, you have to win (the first game),” UK coach Nick Mingione said. “You can come back after not winning the first game but, boy, does it make your life a lot easier (to win).”

Drawing energy from a home crowd of 3,956 fans on a glorious afternoon, the Cats mounted a two-out rally in the first inning, plating two runs to claim an early lead. Despite leaving 15 runners on base in the game the Cats pushed across single runs in the fourth and fifth innings, and a pair in the sixth to run up a 6-0 lead.

Ohio (31-27) sliced the lead in half on Rudy Rott’s three-run home run over the extended-height right-field wall in the eighth inning, ending starter Sean Hjelle’s outing. The sophomore right-hander, who was recently named SEC Pitcher of the Year, gave up eight hits and three runs in 7.0 innings, the eighth time in his last nine starts he’s allowed three runs or less.

Freshman righty Chris Machamer closed out the eighth and senior lefty Logan Salow recorded his 11th save of the season, moving him within one of tying Trevor Gott for the all-time single-season UK record.

Offensively, junior second baseman Riley Mahan broke out of a tough spell with three hits, including a pair of RBI singles, to lead an attack that saw all nine starters record a hit.

Bot 1st – With two outs, Zach Reks doubled to RCF. Luke Becker singled to RF, which scored Reks, and advanced to second on the throw to the plate. Becker scored after Riley Mahan singled through the right side of the infield.UK 2, OU 0.

Bot 6th – Becker, the leadoff batter, singled through the right side, and then Mahan singled down the 3B line on a bunt. Troy Squires walked to load the bases. Marshall and Connor Heady walked, which plated Becker and Mahan.UK 6, OU 0.

Top 9th – Devon Garcia walked, advanced to second base on the groundout from Tyler Finkler, and moved to third on a wild pitch. Black singled up the middle, scoring Garcia. UK 6, OU 4.

o   He extended his reached base safely streak to 31 straight games.

o   Has 24 doubles this season, tying him for 2nd on the UK single-season list.

o   White ended a two-game hitless streak, only the second of his career. He has never gone three straight games without a hit.

o   White now has 26 multi-hit games this season and 70 for his career.

o   Becker now has 14 multi-hit games this season and 27 for his career.

o   Mahan now has 15 multi-RBI games this season and 22 in his career.

o   Heady has reached base safely in 11 straight games.

Kentucky advance in the winner’s portion of the bracket and will face the winner of Indiana and N.C. State at 7 p.m.on Saturday night inside Cliff Hagan Stadium. The game can be heard on 630 AM and UKathletics.com and is currently scheduled to be aired on ESPN3.