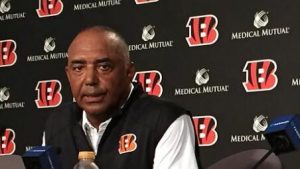 A Marvin Lewis post-game press conference these days is about as excruciating as a root canal. Although the 58-year old Bengals head coach appears soft spoken, unassuming, and contemplative when speaking to the media, I don’t think I can believe much of what he says anymore. You see, Lewis is entering the final year of his contract without an extension. It’s like he’s piloting a plane with no landing gear or parachutes. His fate is solely dependent on the team’s immediate success, so he’s relegated to speaking mainly in the truisms and platitudes of someone on the chopping block.

As the second longest tenured head coach in the NFL (behind Bill Belichick), many would argue that Lewis deserves the security behind a contract extension. Since becoming the boss in 2003, he’s brought a sense of stability to an organization that historically has struggled for relevance. He’s guided the Bengals into the playoffs in seven of his 14 years as coach, including a streak that was snapped last year after five in a row. The one big monkey on his back is that he’s never won a single playoff game. Because of that glaring hole in his resume, a significant percentage of Bengals fans wonder how he’s lasted so long.

After the dismal opening day performance last Sunday against the Ravens, many thought the end was near. A second straight home loss to a struggling Houston Texan team just might signify the proverbial nail in the coffin. Houston’s 13-9 victory may not have instantaneously cost Marvin his job, but it effectively snuffed out any smidgeon of hope for the 52,952 fans in attendance that perhaps the season could still be salvaged.

Quarterback Andy Dalton followed up an opening game nightmare with another pedestrian performance unworthy of someone granted a $100 million contract. The seventh-year pro from TCU was 20-35 for 224 yards and 0 touchdowns. I’ll give Dalton credit in that he has thick skin. Although the worst is yet to come, the vulgar slings and arrows he endured the last few days would have made even my dog blush.

Speaking of dogs, the Bengals offense had neither bark nor bite. The O-line couldn’t block my grandmother. All preseason, the thinking was that they didn’t need to be great—they just needed to be adequate. For the past two games, they’ve been far from adequate. Despite the offensive meltdown, the Texans offense was nearly as inept. The 10-6 halftime score was symbolic of a contest that was putridly unwatchable.

The second half was even more rancid. The Bengal defense held steady, but the offense never got the ball to A.J. Green and could muster only a single Randy Bullock field goal to account for the final margin.

After the final whistle, it’s time for me to head down to the interview room for another painful session with Coach Lewis. The short seven-minute question and answer period is predictably awkward, with Lewis speaking in his usual cliché-laden monotone. “It’s difficult to win many games when we don’t score touchdowns,” he murmured. “We’ve got an opportunity to look at it and get better. We’re going to get better.”

There’s really no flow at all to this particular media session. Even the usual Bengal beat reporters seem a bit uncomfortable in addressing the broken man up on the podium. Seconds of silence between questions stretch into a ghastly eternity as Lewis goes through all the familiar motions. I can’t take it any more and ask him about the blown opportunity of losing two straight home games. What words of encouragement could he possibly offer the fans?

“We’ve got a long season ahead,” he answers. “It’s unfortunate. We want to win for these people. They came out. It was loud. We didn’t send them home with smiles on their faces, that’s for sure.”

Clichés, truisms, and platitudes. From a lame duck Bengals head coach, I’d be crazy to expect anything more.