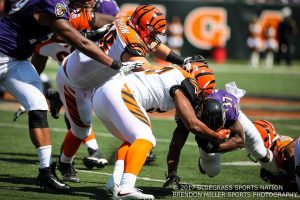 Once upon a midnight dreary, while I pondered, weak and weary, over many a quaint and curious volume of forgotten lore. While I nodded, nearly napping, suddenly there came a tapping, as of someone gently rapping, rapping at my chamber door.

The Baltimore Ravens’ 20-0 thrashing of the Cincinnati Bengals was as horrific as any Edgar Allen Poe narrative. It was literal, real, and exactly what the Bengals did not need. For a team predicted by many to be no better than .500 by year end, every win speaks volumes for a fanbase clapping, rapping, and tapping into the bottomless well of early season optimism.

More than anyone, Head Coach Marvin Lewis realized the importance of a quick start to the 2017 campaign. “It’s as disappointing as it could be,” he lamented. “I don’t know if I’ve ever been in such a disappointing football game as today.”

For this game, I’m giving out helmet sticker duds to Andy Dalton, Tyler Eifert, and the entire offensive line. Dalton was 16-31 for 170 yards, with four interceptions and a fumble. The quarterback we saw today was so bad that he made “Bad Andy” look good. Eifert, a red zone stud from two years ago, caught one measly pass for a total of four yards. As my fantasy league tight end, I’m handing out two sticker duds for his disappearance today. Unfortunately for the young offensive line, there is no quick fix. They were manhandled, brutalized, and penalized from the get go.

The sixteen game NFL season provides plenty of chances to make up for an early hiccup, but here are several reasons why I think this initial defeat was a horribly squandered opportunity. To begin with, this was Cincinnati’s first home opener since 2009 and it could have been their first home opening win in over ten years. To lose right out of the gate to their AFC North rivals in front of 55,000 ravenous fans was deflating to say the least. What they needed, instead, was a big divisional win over a Harbaugh coached opponent to get the season off to a rather unfamiliar–but positively happy–start.

Secondly, with fifteen of their players never having played a single down of professional football, the Bengals come into this season as one of the NFL’s youngest teams. Although veterans such as Andy Dalton and A.J. Green have lost openers before, nothing breeds momentum and confidence for the Cincy kiddie corps like victories in September.

Thirdly, the suspensions of All-Pro linebacker Vontaze Burfict and defensive back Adam Jones, and the injury to highly touted rookie wide receiver John Ross leaves little margin for error. Any time you squeak out a victory with such skilled players out of the lineup is reason enough to celebrate. Should the Bengals still be in playoff contention by year end, they’ll regret a game such as this that they could have stolen early on.

Finally, parity in the NFL demands success in these “toss-up” games. Last year, seventeen of the thirty-two teams finished with between six to ten wins. In other words, there is little separation between 10-6 and 6-10 in the world of pro football. One additional victory could easily vault you above the muddled ménage of mediocrity. On the other hand, one additional loss plunges you into the abyss of the “also rans.” Staying above the fray provides additional hope for a franchise supposedly on an uptick.

The reality is that 0-1 really stinks (Just ask Tom Brady and Bill Belichick). Oh and two, however, would feel even worse. When the Houston Texans come to Paul Brown Stadium this Thursday, it’ll be the first Cincinnati back-to-back home games to open the season since 1983. To remain winless after two such golden opportunities will invariably leave Bengal fans rapping, slapping, and napping for the rest of the long and torturous season.

John Huang is a guest columnist for Bluegrass Sports Nation. He’ll be providing his unique and entertaining perspective after every Bengal home game. You can check out more of his writing at www.huangswhinings.com or follow him on Twitter @KYHuangs.