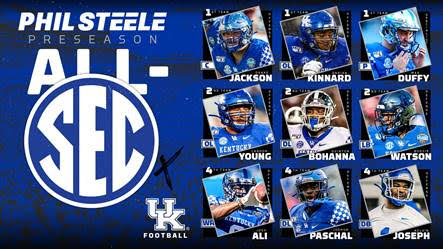 Duffy, a native of Perth, Australia, was an absolute weapon for the Wildcats in 2019. Kentucky led the nation in net punting with a 44.55-yard net average and Duffy led the nation in punting at 48.10 yards per punt. He won the Ray Guy Award as the nation’s top punter and was named a first-team All-American by the AP, Sporting News, ESPN, FWAA, Walter Camp, AFCA Coaches’, The Athletic, USA Today, Phil Steele and Athlon Sports. He is UK’s career punt leader with a 46.3-yard average.

Kinnard, of Knoxville, Tennessee, started in all 13 games at right tackle last season. He finished with 32 knockdowns and just one penalty in 706 snaps. He was also a preseason first-team All-SEC selection by Athlon Sports.

Bohanna is a proud native of Memphis, Tennessee and enters his senior season with 19 consecutive starts at nose guard. The 6-foot-4, 361-pounder totaled 18 tackles, 3.0 tackles for loss, a sack and a pass breakup for the Wildcats’ defense in 2019. He was also recently named to the preseason All-SEC Fourth Team by Athlon.

After missing the entire 2018 season to injury, Young, of Lexington, Kentucky, returned for an excellent 2019, starting in all 13 games at left tackle. He totaled 64 knockdown plays and missed only one assignment in 754 plays. He was also a 2020 preseason All-SEC Second Team choice by Athlon Sports.

Ali, a senior wide receiver from Hollywood, Florida, is UK’s leading returning receiver and punt returner. Last season he started in all 13 games, totaling 23 catches for 233 yards and three scores. As a punt returner, he led the team with 14 returns for 88 yards. In the Belk Bowl, Ali led the Wildcat wide receivers with four catches for 52 yards, including two huge plays on the final drive – a nine-yard contested catch on 4th-and-7 and what proved to be the game-winning 13-yard touchdown grab.

Paschal, a junior defensive lineman from Prince George’s County, Maryland, returned with a vengeance in 2019 after missing the 2018 season to battle melanoma. In his return, he totaled 34 tackles, including 9.5 tackles for loss, 3.5 sacks, one PBU, two forced fumbles, one pass breakup and one blocked kick.

Joseph is a sophomore transfer from LSU who sat out last season due to NCAA transfer rules. In his rookie campaign at LSU, the Baton Rouge, Louisiana native, played in 11 games and recorded 12 tackles and one PBU.

Season tickets for Kentucky football’s seven-game home schedule are on sale now starting at $250 apiece. Season tickets offer savings over all other ticketing options and a variety of exclusive incentives. Fans may work together with a personal ticketing consultant to compare and purchase available seat locations by requesting a call or by contacting the UK Sales Office at (800) 928-2287 (Option 1).