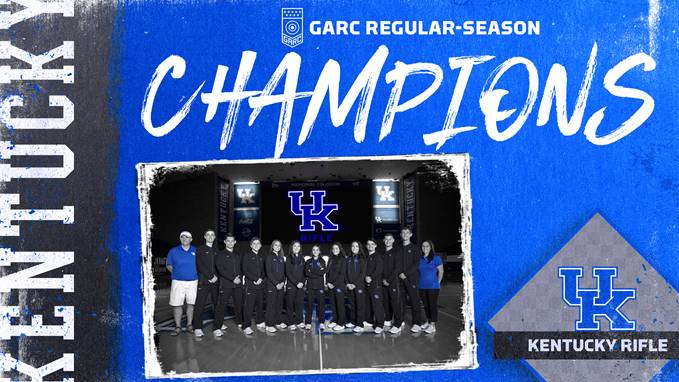 LEXINGTON, Ky. – For the seventh time since its inception, and the first since 2013, the top-ranked University of Kentucky rifle team has claimed the Great American Rifle Conference regular-season championship after earning a 4723-4712 win at No. 3 West Virginia on Saturday.

Kentucky’s 4723 score Saturday was its third best of the season behind its school-record and nation-leading 4734 score at Army in January and its 4724 score vs. Memphis back on Feb. 1. The Wildcats now have three of the top five team aggregate scores in the nation this season.

“I am very happy for the team,” Kentucky head coach Harry Mullins said. “They worked so hard today. Will (Shaner) and Mary (Tucker) were just outstanding in their performance. Seeing them continue to move in this direction is exciting. I am very proud of them and the effort they gave today.”

Individually, freshman Mary Tucker and sophomore Will Shaner were the top two performers at the match as both tied their top aggregate scores of the season at 1193 and 1190, respectively. Tucker scored a match-best 594 in smallbore while she and Shaner tied with 599s in air rifle. Tucker’s 594 smallbore score was her second-best mark of the season while she has scored three 599s in air rifle. Shaner’s 591 in smallbore tied his third best smallbore score of the year while his 599 in air rifle was a season-best mark. So far this season there have been 16 aggregate scores in the NCAA of 1186 or better with Tucker earning nine of those while Shaner claims five of those scores.

Kentucky will be back in action next weekend when it hosts an NCAA Qualifier on Saturday, Feb. 22 at the UK Rifle Range.

This season’s GARC Championships will be in Memphis, Tennessee, on Feb. 28-29. Kentucky will play host to the 2020 NCAA Championships in Memorial Coliseum on March 13-14. Tickets are available online at UKAthletics.com/NCAARifle.